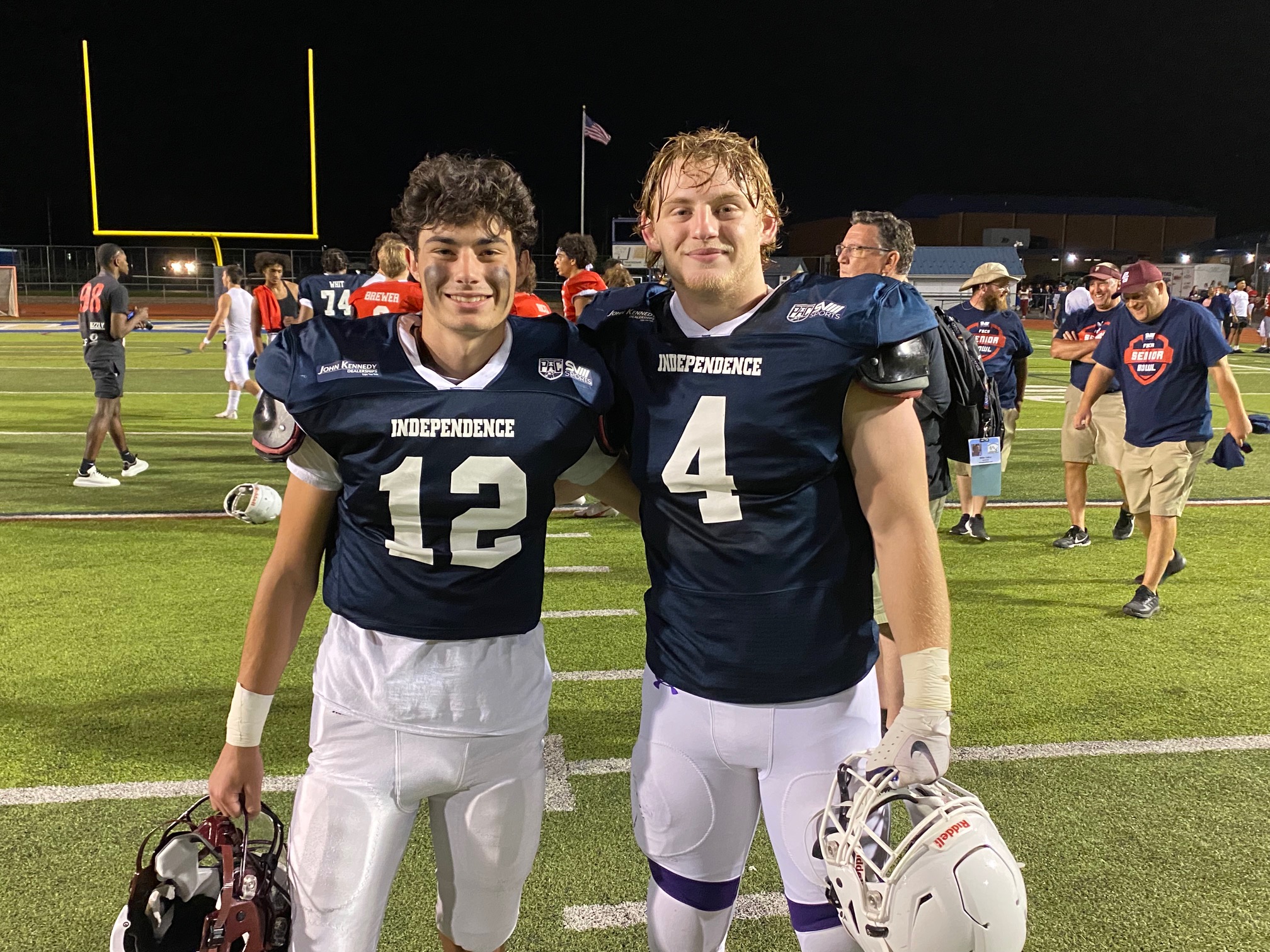 Pottsgrove’s Vinny Scarnato (12) and Phoenixville’s Owen Koch (4) connected for a long touchdown pass for Team Independence in the first half of the PAC Senior Bowl. (Rob Senior - MNG)

Trojans and Falcons huddled together as a team.

For a PAC football purist, it would’ve been massively confusing.

But for the players, the 10th PAC Senior Bowl provided a final, memorable night on the gridiron.

After a two-year hiatus, the annual event to celebrate the Class of 2022’s graduating football players returned at Spring-Ford’s Coach McNelly Stadium.

In the end, Independence was able to claim a 27-7 victory. But long after the final score is forgotten, the players will remember one final night of scholastic football under the lights — albeit a seasonal May evening rather than the brisk fall weather where they made their names on the gridiron for the past several years.

The interspersing of rosters led to the unlikeliest of rivals teaming up to provide the evening’s first score. For four years, Phoenixville’s Owen Koch and Pottsgrove’s Vinny Scarnato butted heads on the field on Friday nights in the fall. But on Monday night, the duo teamed up for one of the highlights of the game.

Taking a pitch around right tackle for the Independence team, Koch pulled up and fired a bullet to a wide-open Scarnato down the right hashmark for a 57-yard score and a 7-0 lead three minutes before halftime.

Koch rumbled for over 1,000 yards for the Phantoms this past year, played ably at multiple linebacker spots, and will wrestle for Shippensburg University next year. But he had one more athletic talent few knew.

“One game, my JV season as a freshman, I had to play quarterback,” Koch recalled. “I flung it around a little bit that day.”

As luck would have it, one of the few who knew of Koch’s hidden skill was Hawthorne.

“That game was against his team!” recalled Koch.

“We only had a couple practices, but we saw him slinging the ball 40 yards down field,” added Scarnato. “We figured there might be an opportunity.”

The roster mix also led to the unlikeliest of teammates pitted against one another, and providing another highlight when Perkiomen Valley’s Jeremy Brewer intercepted his own quarterback, Area Player of the Year Ethan Kohler in the first quarter.

“Coming into this game, I thought ‘I’ve got one chance to pick off my own quarterback!’” joked Brewer.

“He’s gotten me a couple times in practice too. I have to be honest,” admitted Kohler.

Indeed, not many were focused on the scoreboard itself, but most of the action came in a third quarter that saw some unlikely combinations connect for long scores.

The aerial show began with a Viking-to-Ram connection (Kohler to Spring-Ford’s Cole Turner) for Independence and continued when Pottsgrove’s Ryan Sisko found PV’s Dawson Debebe for a 25-yard score to put Freedom on the board.

In between, PJP’s Steele DePetrillo picked off another pass and housed it from 42 yards out to give Independence the 27-7 advantage they would hold through the final quarter.

There were more highlights involving teammates, like Penn State-bound Ian Harvie of Spring-Ford recording a strip sack on Ryan Freed – also of Spring-Ford.

Boyertown’s Luke Ordway provided a highlight with a leaping third-quarter interception – one of three recorded by the victorious Independence squad.

All types of opportunities were allowed. Koch, the 1,000-yard rusher, got to throw a TD pass. Kohler, the All-Area quarterback, got to run a route and catch a pass. And last but not least, Owen J. Roberts received special recognition as the best student section at the event.

But above all, it was an opportunity for the senior football players to show their love and appreciation for the game of football and one another in an environment equal parts competitive and recreational. As Spring-Ford and Team Freedom coach Brubaker said in his postgame remarks, it’s the type of event that makes playing football so special.

“Just having a good time,” said Koch, in response to a question about the final score. “That’s how it started back in youth football, and this is the perfect way for it to end.”

NOTES >> The PAC Senior Bowl awarded a $500 scholarship to one player from each team. The winner for Team Freedom was Phoenixville’s Solomon Ortiz and Team Independence’s scholarship went to Boyertown’s Leo Egbe.