All-Delco Football: At every level of defense, Garnet Valley had stars 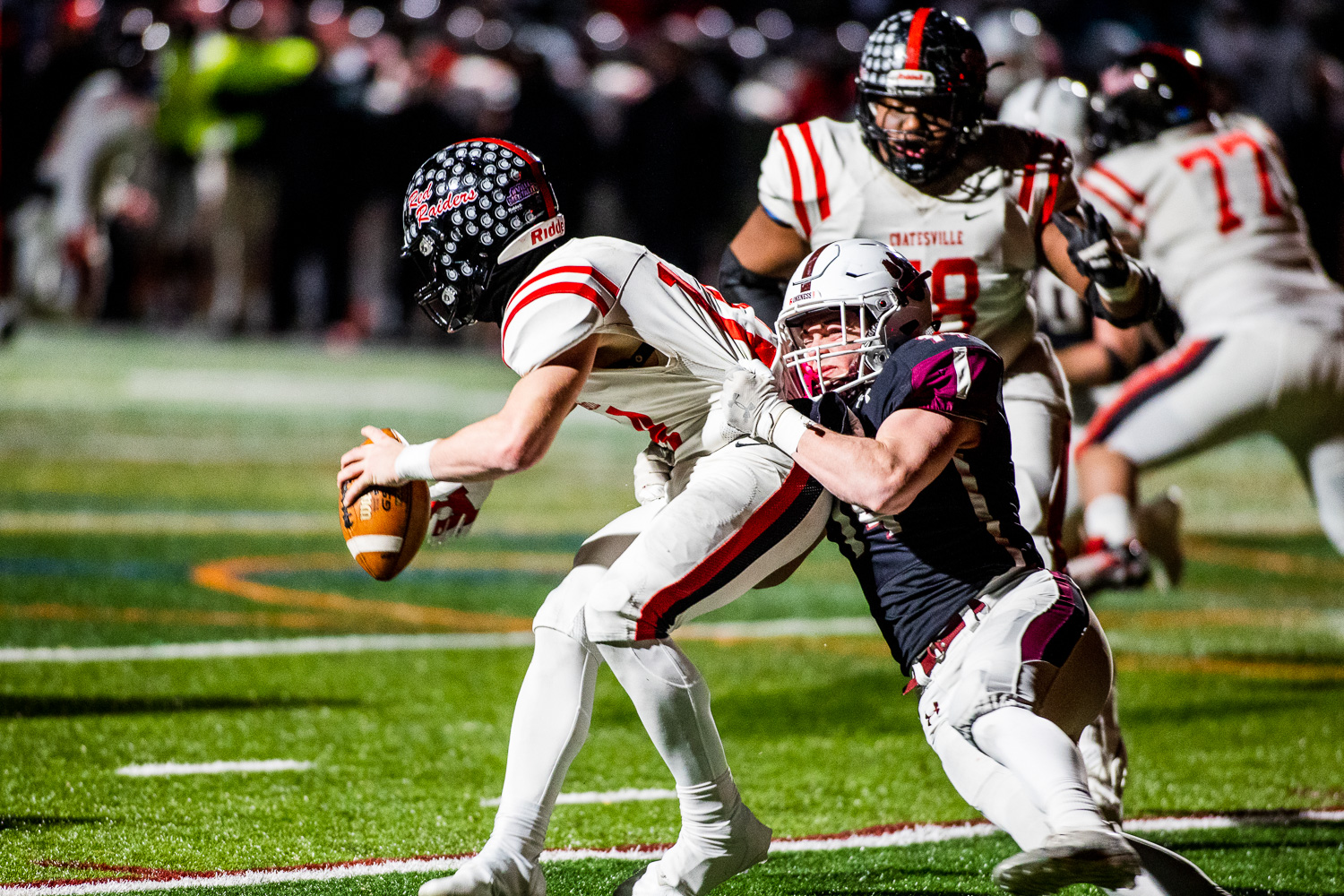 Garnet Valley's Joey Halloran gets Coatesville's Harrison Susi in the grasp, leading to a safety due to an intentional grounding penalty. (Nate Heckenberger - For MediaNews Group)

Ibrahim Sanogo, Academy Park: The senior was a disruptive force on the defensive line and at linebacker for the Knights. A case could easily be made that “Abe” was the best defensive player in Delco this fall. The 6-2, 210-pound Sanogo registered 102 tackles (36 for loss), 6.5 sacks and a pair of fumble recoveries for the Del Val League co-champions. Sanogo also was a short-yardage bull on offense as he racked up 412 yards and 10 touchdowns on the ground.

Julien Laventure, Upper Darby: The senior lineman excelled for three years as a varsity starter. The 6-2, 280-pound DT posted 75 tackles (21 TFLs), 7.5 sacks and three forced fumbles for a Royals team that finished 6-5 overall and won five of its last six games. A leader on and off the field, Laventure flourished at left tackle on the offensive line this year, finishing with 21 pancake blocks. An All-Delco wrestler, Laventure was a PIAA medalist in the heavyweight division last year.

Noble Thompson, Chester: The junior linebacker was the defensive star of a Clippers team that finished 7-4 and qualified for the District 1 tournament. Thompson was a tackling machine and often blew up plays at the line of scrimmage. He led the Clippers in tackles with 89, including 74 solos, and had two interceptions. Thompson also performed well out of the offensive backfield, rushing for 336 yards and six touchdowns. He had an interception return for a touchdown and also returned a fumble to the end zone.

Joey Halloran, Garnet Valley: The senior was the top linebacker in the county and, according to coach Mike Ricci, “our all-around best player this year.” The ILB led the Jags with 108 tackles, including a double-digit effort against St. Joe’s Prep in the state semifinals. Halloran added eight TFLs, 1.5 sacks, five quarterback hurries and three forced fumbles for the Central League champions. Moreover, Halloran was a standout receiver, registering 21 catches for 481 yards (23 yards per catch) and 10 touchdowns. He is also an excellent blocker. Halloran will play lacrosse at Salisbury University next year.

Damian Falcone, Radnor: The senior linebacker was a four-year starter and consistently one of the top players at his position in the Central League. This season, Falcone was an absolute beast on a rebuilding team that went 3-8. He recorded 135 tackles in 11 games and finished with 375 career tackles. Falcone also excelled as the Raptors’ lead running back with 790 yards, including a 106-yard, two-touchdown performance to lead his team to victory in the 125th Radnor-Lower Merion game to close the season. Falcone has garnered interest from multiple Football Championship Subdivision programs.

C.J. Wood, Garnet Valley: The senior defensive back was called “the best safety we ever had” by coach Mike Ricci. He was a three-year starter for the Jaguars, who won their first district championship since 2007 and captured a fourth consecutive Central League crown. In his final season, Wood was second on the team in tackles with 94 and led the team with 41 solo tackles. Proving his amazing talent and versatility on defense, Wood racked up 12 tackles for loss as a safety. In addition, he forced four fumbles, recovered one, and had one interception and three pass deflections.

Chase Barlow, Strath Haven: The senior linebacker was a two-way star for the District 1 Class 5A champion Panthers. As linebacker and co-captain he paced the team in tackles with 116, including 60 solos. The All-Delco wrestler also had three pass deflections and one fumble recovery. On the offensive side, Barlow was a handful to tackle while running the ball. He was second to only Daily Times Player of the Year Tahir Mills in rushing yards (1,443) and touchdown runs (25). Barlow also averaged 20 yards on kick returns for the 13-2 Panthers.

Eric Willis, Academy Park: The senior defensive back was the Knights’ do-everything standout. As a shutdown defensive back, Willis posted 44 tackles (29 solos), three interceptions, three pass deflections, one forced fumble and one fumble recovery. On offense, Willis led the Knights in receiving with 21 catches for 436 yards and five touchdowns. As a runner, he amassed 412 yards and 10 TDs. Willis finished with 16 touchdowns (10 runs, five catches, one interception return) as he was a major factor in helping the Knights win a share of the Del Val League title and advance to the semifinal round of the District 1 Class 5A tournament.

Staring Reaves, Chichester: The junior defensive back was an all-purpose marvel for the Eagles. A varsity starter since his freshman year at Chester, Reaves was electrifying in all facets of the games. His sensational campaign keyed Chi’s success in capturing a share of the Del Val League championship and finished with a winning record (6-4) for the first time in 16 years. Reaves recorded 44 tackles and six interceptions, which tied for the county lead. Offensively, Reaves was a threat running and catching the ball. He notched 20 catches for 355 yards and five TDs and added 349 yards and two scores on the ground. On special teams, Reaves averaged nearly 40 yards per kick return. He put forward his best performance when he scored five touchdowns to lead the Eagles to a 41-6 victory over West Chester East.

Matt Shuler, Strath Haven: The senior defensive back was exceptional on both sides of the ball for the Panthers. A three-year varsity starter and co-captain, Shuler flourished at strong safety for the District 1 Class 5A champions. He registered 30 tackles, three interceptions, seven pass breakups, two caused fumbles and a fumble recovery. He returned two picks for touchdowns. On offense, the fleet-footed Shuler rushed for 1,089 yards and 15 touchdowns (8.6 yards per carry). He had seven catches, four of which went for TDs. On special teams, Shuler took one kick return to the house and averaged 36 yards per return. Strath Haven coach Kevin Clancy said of Shuler: “He is the key player in our defense at strong safety and has been for three years.”

Max Busenkell, Garnet Valley: The senior quarterback and defensive back had a history-making season with the PIAA Class 6A semifinalist Jaguars. A starter in the Jags’ defensive secondary since his sophomore year, Busenkell took the reins of the offense in 2021 and had the greatest season of any Garnet Valley quarterback. Busenkell completed 70 percent of his passes (89-for-128) for 1,933 yards, 27 touchdowns and a 259.74 QBR. The passing yards and TDs set school records. He didn’t throw an interception in the regular season. As a defensive back, Busenkell had 16 tackles, three interceptions and a forced fumble while tasked with covering the opposition’s top receiver. An All-Delco lacrosse player, Busenkell is committed to Notre Dame for lacrosse.