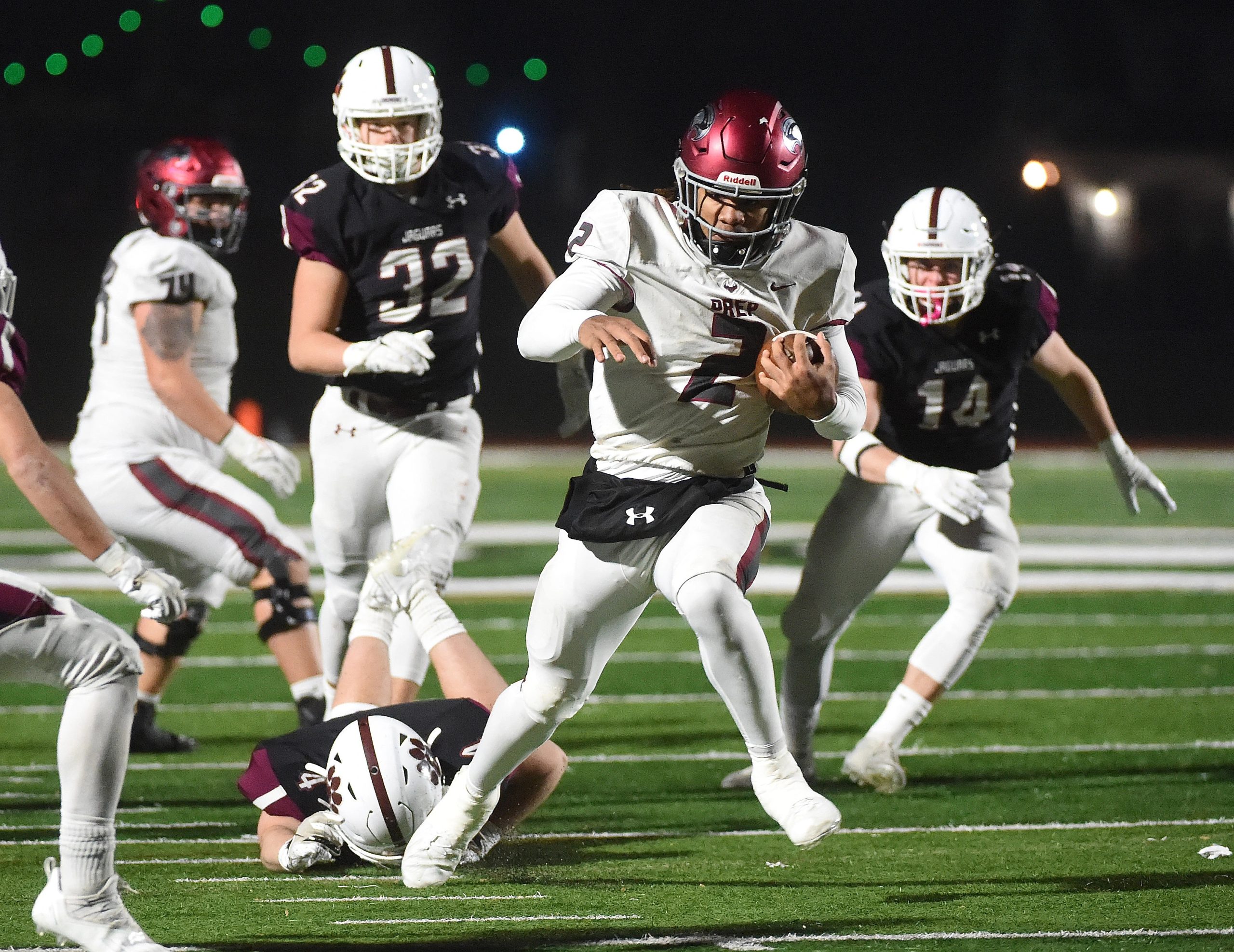 St. Joe's Prep's Samaj Jones makes a beeline for the end zone in the second half of the Hawks' 49-13 victory over Garnet Valley in the PIAA Class 6A semifinals at Ridley High School. (PETE BANNAN - DAILY TIMES)

Not just because the unbeaten Jaguars and Treadway’s St. Joseph’s Prep side appeared on a collision course toward a PIAA Class 6A semifinal. But, for the Radnor native, it’s just the consequence of living in Delaware County and having grown up in the youth pathways that yield plenty of Central League players.

“There’s definitely, I feel, a lot more motivation behind it,” Treadway said after Prep advanced to the state final with a 49-13 win over the Jaguars at Ridley’s Phil Marion Field. “All my friends are from Delco, and they’re always talking about Garnet as ‘the team.’ I felt like that really helped me with my motivation. It definitely had a little bit of a different feel, than just another team from somewhere else.”

Treadway and his mates dominated the affair. Prep ran out to a 28-7 lead at halftime, the right tackle blocking on the way to three first-half rushing touchdowns. Two came from uber-talented sophomore quarterback Samaj Jones, who also threw for three scores and ran for a third score in the second half. The running clock went on early in the third quarter, Prep having its way on both sides of the ball.

For all the dazzling and still improving young talent at the skill positions, the line paved the way to Saturday’s romp. Treadway, a senior bound for Amherst College, is a key cog. The final rushing TD, a one-yard sneak by Jones, told the tale, Prep’s front driving Garnet Valley four yards deep into the end zone. That control of Garnet’s line hadn’t happened in the Jaguars’ first 14 wins this season.

The Hawklets’ hunger is in part driven by a pair of losses, one-score setbacks to Georgia powerhouse Milton and Catholic League foe La Salle. Prep summarily avenged the latter with a place in states on the line, and they’ll carry an 11-2 record into Hershey having turned adversity into an advantage.

“We knew coming into the game that Garnet Valley hadn’t had a dogfight,” Treadway said. “They hadn’t had a loss, they didn’t know what that felt like, and we knew that all too well. With those setbacks, people were valuing us as the underdog, which typically we’re not the underdog. But we really like that. I felt it really motivated us.”

Garnet Valley won some of the battles it needed to early, but not nearly enough of them. The Jags turned the ball over three times, including two first-half interceptions by Max Busenkell, who eventually would recover to hit Ndozi Okolo for a 37-yard touchdown for the Jags’ only score against Prep’s first-team defense.

Both of the earlier interceptions set up short fields, Anthony Scacca returning one 47 yards to the 5, Keenan Nelson Jr. taking the other to the 5. Add in a failed fourth-and-2 in the first quarter on which Garnet Valley somehow avoided trouble when Prep botched a field goal snap, and the Jags had too many mistakes to tolerate against a team of the Hawks’ caliber.

“We were feeling good on D,” said Nolan Brennan, who teamed with Austin Sorokanych for a big third-down stop in the first quarter. “… We started off strong. I’ve got to give it to St. Joe’s Prep, they’re a great team. They’re unbelievable.”

Treadway is part of that. He grew up in the Radnor Young Raiders and Wayne Wildcats programs, then played for Radnor Middle School in seventh and eighth grade. When it came time to choose a high school, though, he opted for Prep. “No disrespect to Radnor, but Prep’s just different,” he said. “I feel like that goes without saying.”

For his decision, and for the countless hours of hard work on improving his game since, he’s part of something special. Treadway hopes that includes another state title in Prep’s illustrious history.

This one might come with something new: The feeling of proving doubters wrong.

“We try to block it all out, but when it does come through, I’d say it’s definitely more motivating than discouraging,” he said. “We love when people doubt us. We really do. I feel like that motivates our entire coaching staff, players, everyone, the entire program.”