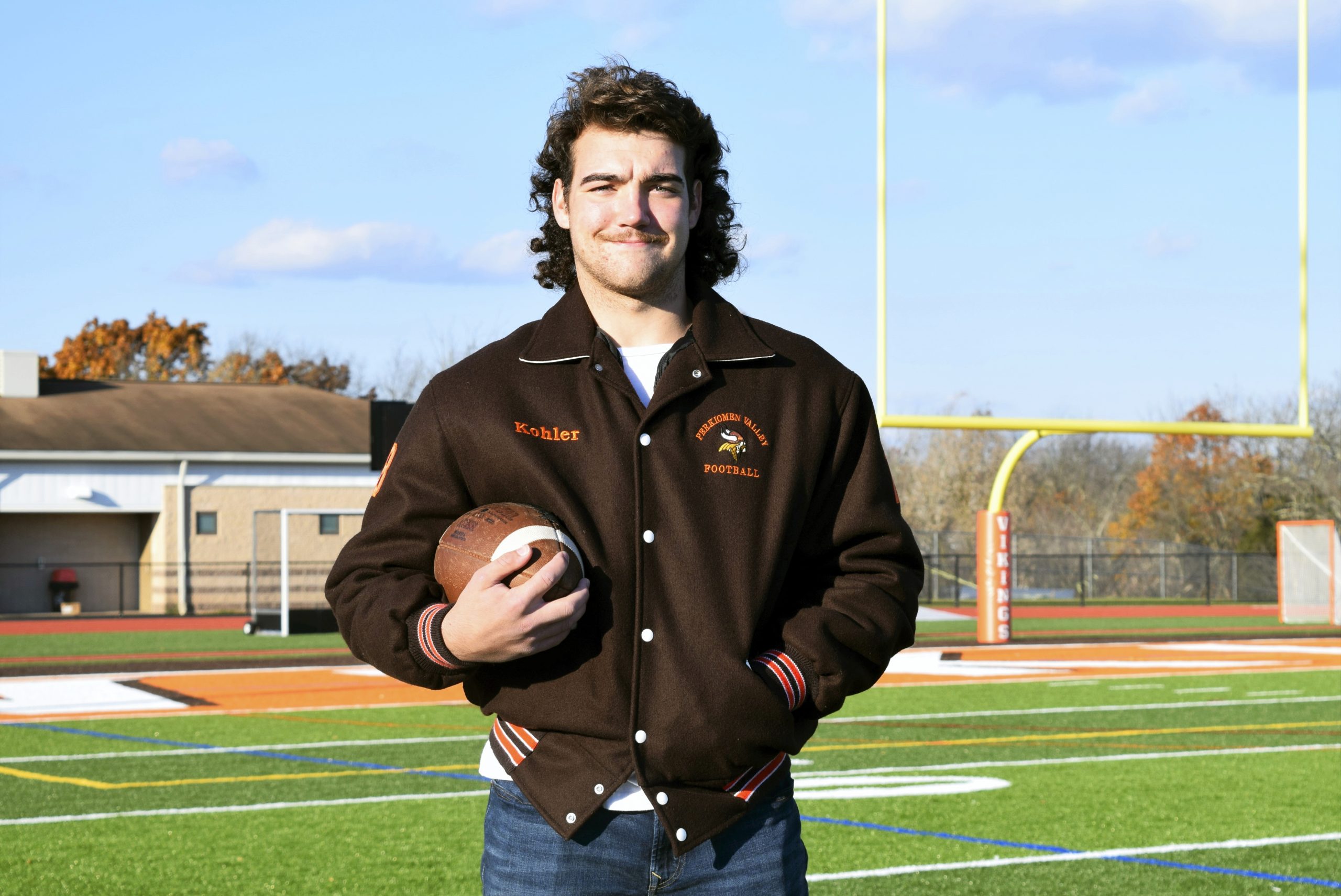 In 2018, freshman Kohler filled in on occasion for then-Perkiomen Valley starter Cole Peterlin, who battled an ankle injury throughout that season. But in the climactic game of the season, on the road at rival Spring-Ford, Kohler was thrown into the mix down two scores at halftime.

Hanging in the balance? Only the outcome of the area’s hottest rivalry, and the PAC championship streak.

No matter. The unflappable Kohler led the Vikings to three fourth-quarter touchdowns, earning a 27-20 victory that allowed PV to go on to three-peat as PAC champions. The brief cameo became an unavoidable announcement of what was to come for PV over the next three seasons.

“This kid is a beast!” exclaimed a hobbled but ecstatic Peterlin that night. “He’s going to be unreal for the next three seasons – he’s got what it takes.”

Peterlin’s words proved prescient. Kohler lived up to his promise and more.

Fast forward to his senior year this fall where Kohler amassed 40 total touchdowns (28 passing, 12 rushing), passed for 2,392 yard and ran for 567 more in leading the area’s most prolific offense.

The senior quarterback brought his career full circle this season as he and the Vikings reclaimed the league title that belonged to rival Spring-Ford in his sophomore and junior years and won a District 1 playoff game for the first time in Kohler’s career.

Hard work, dedication, and a team-first attitude paid off for the 2021 Mercury All-Area Football Player of the Year.

Making your mark as a quarterback at Perkiomen Valley is no easy task. Attempting to follow in the footsteps of Zach Zulli, Rasaan Stewart, Stephen Sturm, and Peterlin would give plenty of athletes cause for concern.

Now you can add the name Ethan Kohler to that list.

“I cannot say enough about how Ethan’s grown as a player, a leader, and as a human being,” said Rob Heist, head coach of Perkiomen Valley and 2021 Mercury Coach of the Year. “He’s worked his way into that conversation with the best quarterbacks to come through our program, and that’s not an easy task. When all is said and done, he’s going to leave here as the No. 2 all-time passer in Perkiomen Valley history behind Stephen Sturm.”

No slight to Kohler as Sturm stands as the Pennsylvania 6A record holder for passing yards in a career.

Heist’s pride in his quarterback shines brightest when he discusses Kohler’s work ethic and growth as a person.

“He’s willed himself into a complete player,” Heist said. “He earned it in the offseason, in the weight room, with his dedication and hard work.”

As an underclassman, Kohler displayed impressive natural passing ability but was determined to become more of a threat on the ground, running with the ball and thus balancing the Perkiomen Valley offense.

“I watched Cole, who was such a dynamic athlete, and I realized if I could run even half that well it would open up so much more for our offense,” Kohler said.

Kohler impressed early in 2021, which was primed to be a special campaign for the Vikings. As conference play began after a 2-2 non-league run where Kohler tallied 12 touchdowns (8 passing, 4 rushing), he separated himself from the rest of the PAC (pun intended.)

In the league opener against Spring-Ford, Kohler got the job done and then some, amassing 280 of PV’s 343 total yards of offense as the Vikings ended a two-year skid against their archrivals, winning 28-22 to move into pole position in the PAC Liberty Division race. He passed for 142 yards and a touchdown, and carried 17 times for 138 yards and another score.

The dual threat emergence didn’t only impress those in orange.

Mobility is just one dimension Kohler brought to the 2021 Vikings offense, on top of his synergy with skill players like Dawson Debebe, Michael Poruban, Ryan Klimek, and others.

Heist has coached all the standout QBs who’ve come through Perkiomen Valley in the past 15 years, and he says the area where Kohler emerges from the bunch is his football IQ.

“He’s a high school senior, but I’d venture to guess he’s got a higher football IQ than some guys who’ve played college quarterback for a number of years,” Heist said. “Recognizing coverages, defensive fronts, tendencies, and knowing where we can take advantage of those things.”

Heist is a self-described ‘type-A, controlling play caller.’ So the Vikings having an unofficial ‘play’ known as ‘QB choice’ speaks volumes.

“It was like, Ethan, you pick what we’re going to run here,” Heist said. “To give him those reins shows the amount of trust I had in his ability to be a coach on the field.”

The Vikings kept rolling after the big Spring-Ford win, adding four more victories by a combined score of 184-19 with their defense taking center stage. Kohler and the Vikings offense averaged more than 40 points per game in PAC play this season.

The run culminated in a 30-0 victory over Pope John Paul II in the PAC championship game to being the title back to the Valley for the first time since 2018.

For all their high school success, Kohler and the Class of 2021 had yet to taste victory in the District 1 playoffs.

A vintage Kohler performance (273 total yards, five TDs) notched that accomplishment for PV in a 42-21 takedown of Central Bucks East.

Kohler’s career came to an end the next Friday at Coatesville, but the Vikings certainly went down swinging. After falling behind the Red Raiders 35-9, Kohler’s 300-plus yard passing performance led a furious comeback that only fell short when Coatesville recovered an onside kick with about a minute to play to preserve a 35-30 victory.

“He’s the kind of kid you’d want your son to emulate,” Heist said. “Great grades, high GPA. Vice president of his class. Volunteers and helps out with our Life Skills kids in the school. He is a true, genuine captain, and has been voted as such for the past two seasons by our team.”

Kohler plans to go onto college to continue his football career and major in chemistry or pre-med after wrapping up his high school sports career by playing basketball for PV this winter. Area football fans may not recognize him on the court right away, however, as he’s gotten rid of the mullet and mustache he and teammate Zach Schimpf grew throughout the season.

Kohler was quick to credit Heist and the other coaches he’s had throughout his days in the Perkiomen Valley program, particularly former Perk Valley head coach and Ethan’s PV West Middle School coach Scott Fuhrman, as well as his mother Michele.

Former teammates have stayed close with him like former wideout Mike Dougherty, whose been Kohler’s throwing partner every offseason.

The list of Perkiomen Valley quarterback greats has grown with the addition of Ethan Kohler.

Now, Kohler says, hewants to do his part to add another link to the chain.

“I’m sure I’ll be texting Danny (Koehler, next year’s projected PV starting quarterback) before every game,” Kohler said. “He’s one of my best friends and I couldn’t have asked for a better person to have as my backup. I valued his opinion every time I came off the field and he’d tell me what he saw. We work out together, and we hang out even outside of football. I’m sure that’ll continue next year.”