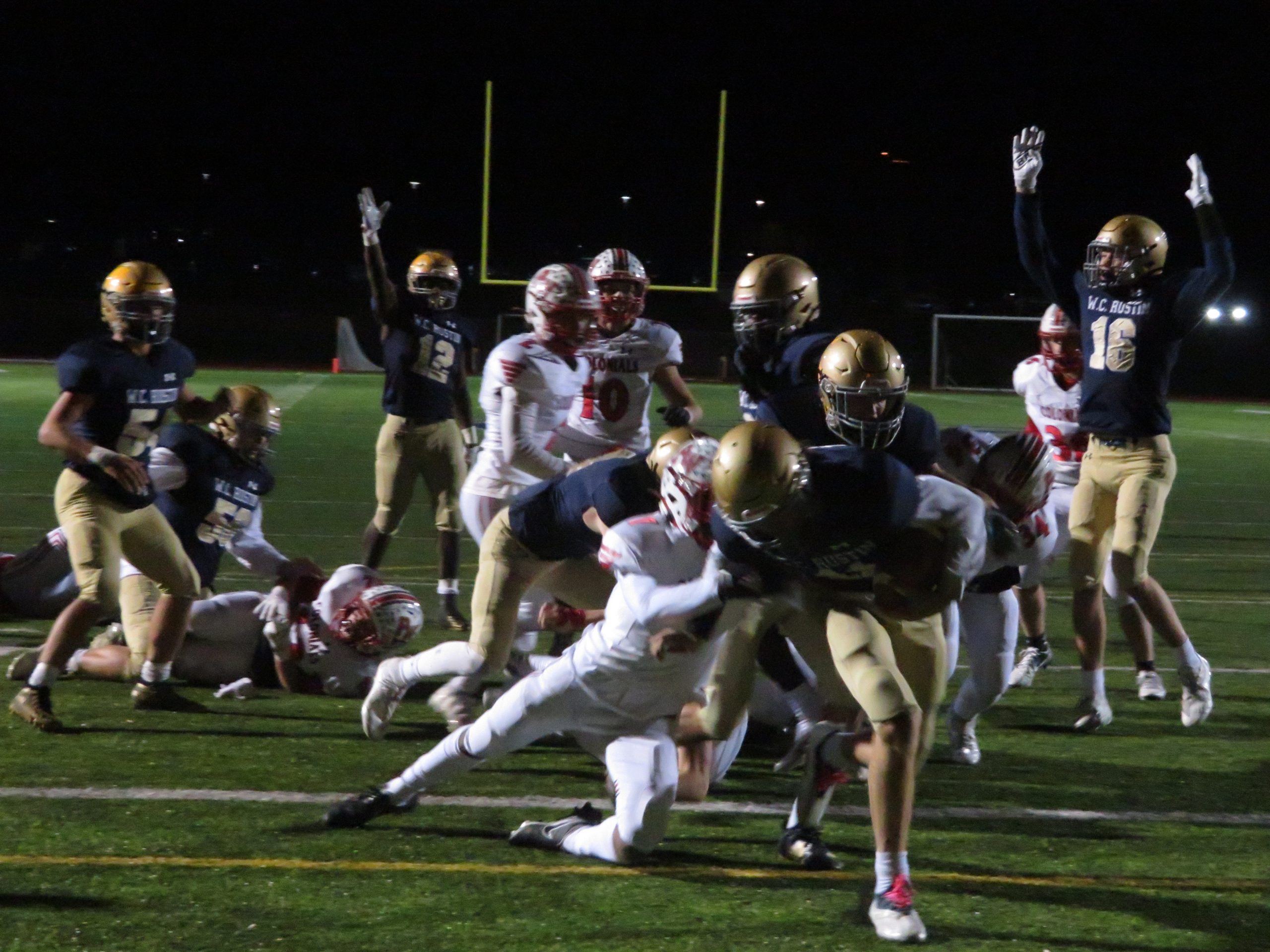 West Chester Rustin celebrates as quarterback Kolbe Freney scores on a 7-yard touchdown run in the fourth quarter against Plymouth Whitemarsh in the District 1-5A semifinals on Friday, Nov. 19, 2021. (Mike Cabrey/MediaNews Group)

WESTTOWN >> Dayshawn Jacobs has done so much for West Chester Rustin this season with his legs. The senior running back entered Friday night’s District 1-5A semifinal with the program record for rushing yards and rushing touchdowns in a single season.

Jacobs did his job on the ground against Plymouth Whitemarsh. He ran for 193 yards and two touchdowns on 24 carries.

But it was what Jacobs did on special teams that may have saved the Golden Knights season. Trailing by one early in the fourth quarter, Rustin faced a 4th-and-4 at their own 47-yard line. Jacobs punted the ball 52 yards, setting up the Colonials at their own 1-yard line.

After forcing a three-and-out, Rustin took over on the plus-side of the field and went 45 yards in seven plays. Quarterback Kolbe Freney capped the drive with a seven-yard touchdown run and the Golden Knights defense held the lead for a 19-14 win at West Chester Rustin High School.

When Jacobs received the snap on the momentum-swinging punt, he looked up for a running lane. The Colonials had all 11 defenders near the line of scrimmage to stop a fake, so the senior sent the ball high and deep into PW territory. When the ball stopped rolling, it was three feet from the goalline.

“If I see an open lane I can run,” Jacobs said. “I just didn’t see any openings. I just had to punt it. I think they expected us to run, and that’s why the punt rolled so far.”

“That was a great punt,” PW coach Dan Chang said. “To get us pinned on the one there, it really limited us in what we were able to do. (Jacobs is) scary as a punter back there. If you watch him, he fakes more than he punts. If you don’t play that fake, it’s hard to tackle him in the open field. He hit a great one, it rolled to the one and we have to be able to get out of there.”

Plymouth Whitemarsh had two runs for a total of three yards before an incomplete pass led to a punt from inside their own five.

The key play on Rustin’s game-winning touchdown drive was a reverse to Chase Hatton. On 2nd-and-17 after a two-yard loss and an illegal shift, Freney pitched the ball to Jacobs going right. Jacobs pitched it to Hatton going left and the freshman was in the open field. He picked up the first down with a 20-yard gain.

Five plays later, Freney ran a quarterback sneak on 3rd-and-2 from the seven. With some help from his linemen, Freney got into the end zone for the game-winning score.

“I think (the punt) was a huge (momentum) swing,” Jacobs said. “We put them deep in their own territory. Our defense held up like the defense did all night. We forced a punt and then we drove back down because we had a short field. Our line is great. Any time you give us a short field it’s going to be a tough one.”

“They are physical,” Chang said. “Their offensive line is good. They come off the ball hard, they finish blocks, they can move. Their lead blockers are tough. Obviously Jacobs is a stud. That kid is as good as advertised. He’s got great speed, power, vision. He breaks tackles. They do things well. They brought some things out they haven’t run in a little bit and credit goes to them. They were tough, physical. Our guys played hard. We were banging around in there. Just didn’t get enough on the scoreboard.”

Plymouth Whitemarsh, facing a similar situation it did against Upper Dublin last week, got the ball back with 4:38 left and a five-point deficit. Quarterback Aiden O’Brien picked up a big 4th-and-15 with an 18-yard run, but the drive ended three plays later when Rustin defensive back Daimon Jacobs intercepted PW running back Chris McLaughlin.

McLaughlin threw a touchdown on a trick play earlier in the game and the Colonials tried a similar play. This time, Daimon Jacobs was there to grab the interception at his own 35-yard line.

“I saw they were coming out on a pitch,” he said. “I was ready to go down and make a hit, but then I was like I know they hit us with it before. I stayed back in coverage and it worked out for me. I saw the ball coming, made a play, helped my team out for the win.”

“Honestly I fell for the fake,” Dayshawn Jacobs said. “I was the corner on that side and I bit up and he ran right behind me. Then I saw my brother pop in with that interception. I was so hype. I was so thankful.”

Dayshawn Jacobs ran for 37 yards on the next play before picking up eight. Freney converted the 2nd-and-2 with a sneak and then the Golden Knights were three kneel downs away from punching their ticket to next week’s District 1-5A championship game against Strath Haven.

“We’re so excited,” Dayshawn Jacobs said. “This is our second year in a row. Every year we set goals. This was one of them – especially this year. We were working hard in the weight room, working hard in the summer and it all led up to this. Now we just have to finish.”

The Colonials took a 14-7 lead midway through the third quarter.

On the first play after a Rustin punt, PW ran what looked like a regular triple-option play. O’Brien faked the handoff up the middle, stepped right and pitched to McLaughlin. McLaughlin, who was the team’s quarterback last season and for most of this offseason, threw down the field to a wide open Phil Taormina. The senior receiver raced 65 yards to the endzone. O’Brien connected with Jared Kolsun for the two-point conversion and seven-point lead.

“It’s a play we’ve worked on regularly,” Chang said. “It’s actually the second time we threw it tonight, we did earlier in the season. Chris can throw the ball. It works out for us there. Phil does a great job of selling it and Chris delivers a nice ball.”

Rustin responded with a seven-play touchdown drive, capped by a five-yard Dayshawn Jacobs run, late in the third quarter, but a wide extra point kept the Colonials ahead, 14-13.

PW went three-and-out on the ensuing possession and Rustin took over at their own 41. A chop block hurt the Golden Knights field position and they faced 3rd-and-11 on the first play of the fourth quarter. Freney ran for seven yards to set up Dayshawn Jacobs’ game-changing punt.

End of the line

The loss ends Plymouth Whitemarsh’s season. The Colonials won 10 straight games, including two in the district playoffs, after losing their season opener. The Suburban One League American Conference champions had one of the program’s best wins in the last 25 years when they beat Upper Dublin, 42-36, in overtime in the district quarterfinals.

“Coming into the year we’re young, we’re a little inexperienced, we’re small and we lose that first one to CB South,” Chang said. “We kind of get written off. I was proud of our guys. We’re battling every game. We’re doing everything well offensively and defensively. They should be proud of what they’ve accomplished. They’re not going to remember the pain of this. There is a lot for us to celebrate this year.”