Informed they had to fight, Strath Haven turns up the heat on Marple Newtown 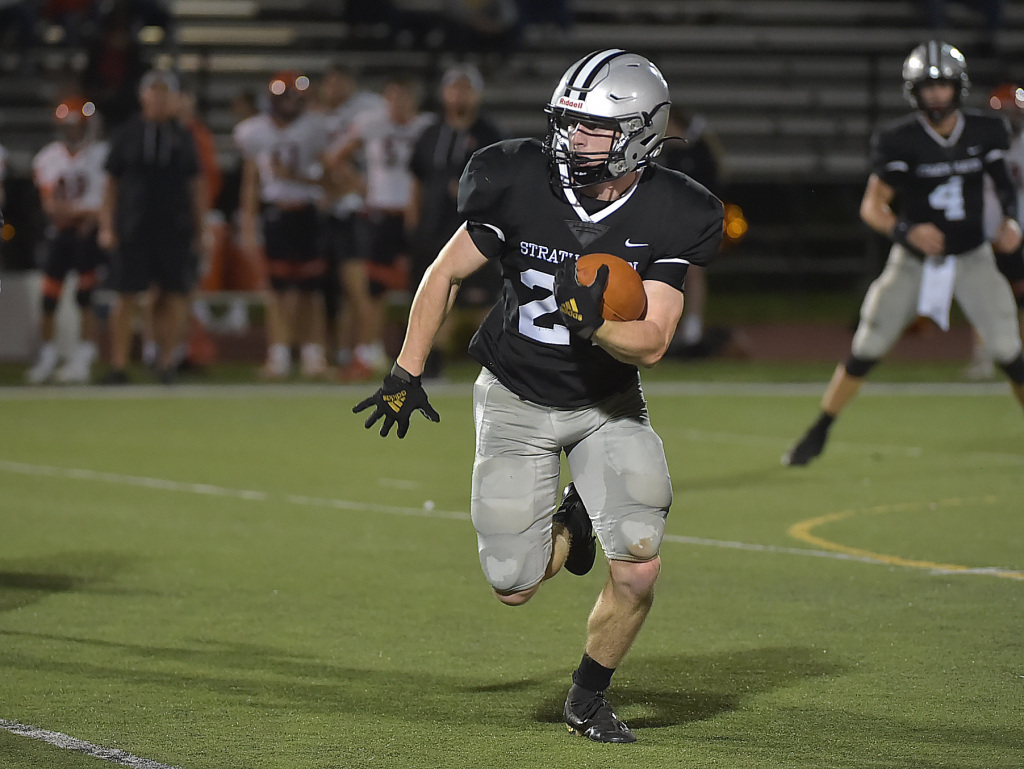 Chase Barlow ran for 164 yards and three touchdowns to lead Strath Haven to a 42-16 victory over Central League rival Marple Newtown in the quarterfinals of the District 1 Class 5A playoffs, (MediaNews Group file).

NETHER PROVIDENCE — Strath Haven had an 11-point lead early in the second half, but Marple Newtown was on the march.

As the Tigers drove into Panthers’ territory, Strath Haven assistant coach Eric Hollingsworth yelled out to the defense, “I hope you guys know you’re in a dogfight.”

Senior defensive end/tight end Nate Perlmman heard Hollingsworth’s words and so did senior defensive back/running back Chase Barlow. Neither had to be told they were indeed in a scrap at George L. King Field.

“We knew,” Perlman said. “Marple’s a great team and we knew they were going to come out and give us everything they had. We knew we had to go out there and give it our best.”

The Panthers (11-1) turned it up a notch on both sides of the ball to earn a trip to the District 1 Class 5A semifinals with a 42-16 victory over the Tigers in a game that was much closer than the final score indicated.

The Tigers (8-4) controlled the ball and the clock in the first half to stay within striking distance of the second-seeded Panthers. Strath Haven only had the ball twice in the first half, for less than eight minutes total, but scored on both of its possessions to take a 14-10 lead into the locker room at halftime.

Marple had the ball for nearly 17 minutes behind the running of Charlie Box and the short precision passing game of sophomore  quarterback Dave Bertoline. Box had 72 of his team-high 86 rushing yards in the first half. Bertoline completed his first five passes for 40 yards. That included a nine-yard scoring strike to Eric McKee.

“We played our butts off but it just wasn’t enough,” McKee said.

Strath Haven turned the heat up on both sides of the ball to pull away and set up a showdown at home next Friday against sixth-seeded Academy Park, a 28-13 winner over No. 3 Unionville. The Panthers held the Tigers to 31 yards rushing in the second half while the offense cranked out 281 of its 398 rushing yards after the break.

Barlow and fullback Anthony Crawford did most of that damage. Barlow ran for 117 of his 164 yards and scored two of his three touchdowns in the second half. Crawford gained 107 of his 158 yards and tallied his only TD after the break.

“We came out and did what we do best,” Barlow said. “Everyone did their jobs and when we do that and get into our rhythm, we don’t stop. We keep going.”

Barlow had touchdown runs of 26, 13 and 75 yards. The last was a killer. He went right up the middle only one play after Bertoline had scored on a nine-yard run with nine seconds to go in the third quarter, which had cut the deficit to 28-16 and gave the Tigers some hope. Barlow took that away in one burst as time expired in the third quarter. Crawford finished it off with a 17-yard run up the gut with 1:43 to play in the game.

“We left everything out there and I couldn’t be more proud of our team,” Box said. “Shout out to Haven. They’re a great team. They stuck to their philosophy of three or four yards at a time and then broke off a couple of big runs. There was nothing we could do about it.”