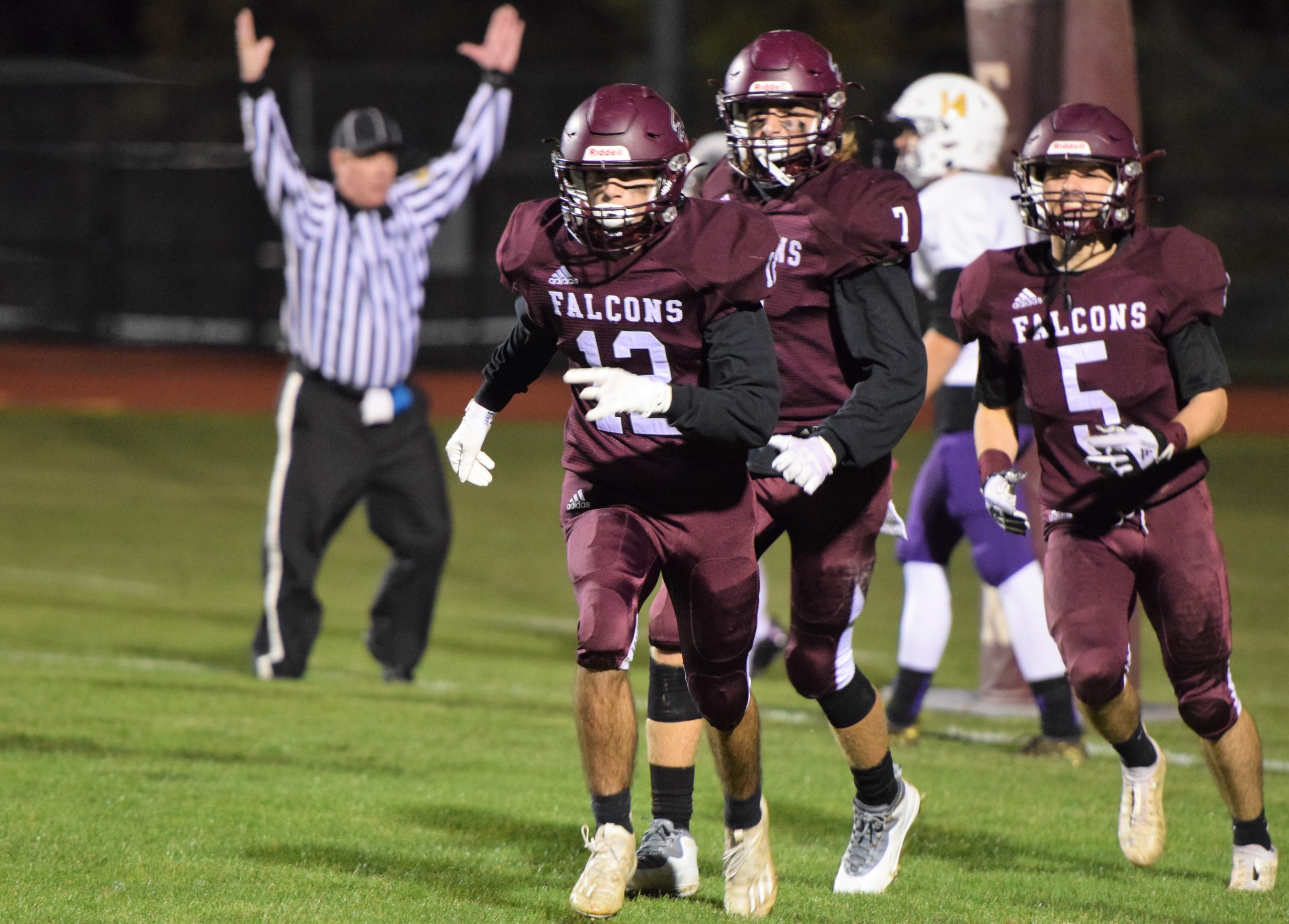 The Pottsgrove football team appeared headed for an unceremonious end to its season just a few weeks ago.

Following a lopsided loss to division rival Pope John Paul II and a matchup with league power Spring-Ford looming, the Falcons were one defeat away from wrapping up a good but — by their program standards — not great 2021 campaign.

Instead, three weeks later the Falcons stare down a chance to take their season where all teams hope to go when they kick off in August: the state playoffs.

Second-seeded Pottsgrove (8-2) travels to top-seeded Bishop Shanahan (8-3) in the District 1 Class 4A championship game at 7 p.m. on Friday with the Falcons hoping to reclaim its spot atop the district for the first time since three consecutive titles in 2018.

“Right after the PJP game is when it really clicked,” junior offensive and defensive lineman Dominic Demeno said. “It was, ‘Listen, we’re not letting our season go out like that.’ We just play with all we got, everything we’ve got for these seniors.”

Pottsgrove quarterback Ryan Sisko rolls out as he gets a big block from Max Neeson (33). (Austin Hertzog – MediaNews Group)

The Falcons’ last postseason trip ended at the hands of Shanahan in 2019 in the District 1-4A semifinals. The Eagles’ 56-24 victory ended the Falcons’ streak of three straight district titles and state playoffs trips.

Shanahan had 26 sophomores on that 2019 squad that are all seniors now, having advanced the school to the district title game for just the second time in program history.

Jordan has completed 114 of 206 passes for 1,519 and 23 touchdowns passes this season, while leading his team in rushing with 896 yards and 11 touchdowns. Senior Colin McGrorry is the Eagles’ leading pass catcher with 34 grabs for 528 yards and 13 touchdowns and also has 312 yards and a score on the ground.

The Falcons only have a much smaller senior class with Neeson, Scarnato, Caffrey, quarterback Ryan Sisko (45-of-101 853 yards, 13 TDs), wide receiver Tyler Kaufman (16 catches, 415 yards, 5 TDs), kicker/punter Landon Shivak (31 XPM, 3 FGs) and offensive/defensive linemen Jacob Spadt and Alex Degler as the only seniors on their roster.

Junior running back Amir Brunson (706 yards, 9 TDs) was also on the field two seasons ago along with Neeson, Caffrey and Scarnato.

That wasn’t the case for the majority of the Falcons’ roster who made their playoff debuts last week with a 34-12 first round win over Upper Moreland.
“It’s playoffs, so you know you gotta kick it into a different gear,” junior offensive/defensive lineman Mark White said. “We all came out and played hard and executed our jobs and it paid off for us.”

“There were a little bit of nerves,” sophomore tight end/defensive end Riley Delp said, “but if you mess up it’s all about the next play mentality. We practice that all year round.”

The Eagles blanked Chichester 21-0 in their playoff opener to reach the title game and have an advantage in size and experience on the Falcons.
Just like the role it relished against Spring-Ford two weeks ago, Pottsgrove will play underdog against a Shanahan team whose three losses came against Ches-Mont Class 6A powers Coatesville, Downingtown East and Downingtown West.

“It’s going to be a lot of discipline,” Neeson said. “We have to stay home on our weak side a lot. We have to make sure we’re all doing our jobs, and we have to be a sound football team for four quarters of a football game.”

“Just go in there, play our game and just do what we do,” junior Bryce Caffrey said.

With their backs up against the wall in their last two games, the Falcons have shown a lot of resiliency to continue their season an extra two weeks. They plan to carry that attitude once again Friday night.

“I do remember we never stopped fighting, which I think is the most important part,” Scarnato said of the playoff loss two years ago. “I think we have carried that mentality out throughout the whole season. Win or lose, we won’t stop fighting no matter what.”

Perkiomen Valley gets another crack at Coatesville in District 1-6A quarterfinal
Jordan, stifling defense propel Shanahan to District 1-4A title over Pottsgrove`
Loading Comments...
Comment
×