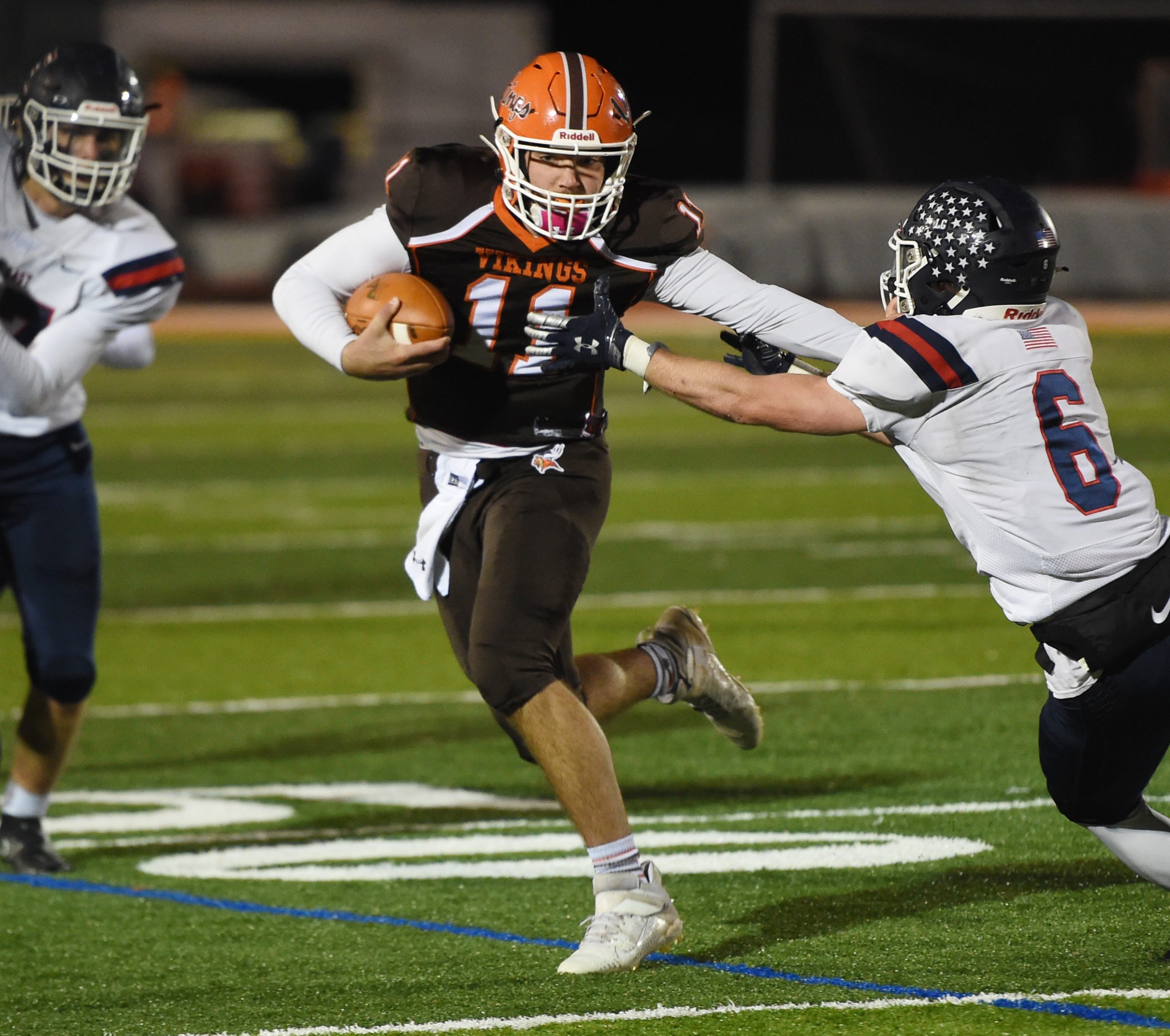 GRATERFORD >> Ethan Kohler was the only Perkiomen Valley player to repeat as Pioneer Athletic Conference champion when the Vikings took down Pope John Paul II last week for their first league title in three years.

The senior quarterback took care of that, totaling five touchdowns as the sixth-seeded Vikings (9-2) dominated the second half in a 42-21 victory over the 11th-seeded Patriots (6-5) for Perk Valley’s first district win since 2017, when this crop of seniors were eighth graders.

“I think everybody did our job,” Kohler said. “Our receivers were getting great separation. Our O-line did a great job up front.”

“It’s definitely a big one for us, but our job’s not finished yet so we’re going to keep it moving,” he added. “It’s just another win.”

The Vikings face third-seeded Coatesville — a 48-10 winner over Owen J. Roberts — next Friday in the quarterfinals. Coatesville beat Perk Valley, 35-27, in Week 2 this season.

“We’re excited, man,” PV senior offensive lineman Jake Jonassen said. “When we found out we had a possibility of getting back at those guys, we were all stoked. But they’re a tough team, we’re a tough team, so it’s going to be a good battle.”

Kohler completed 17 of 20 passes for 218 yards and three touchdowns on Friday, connecting with Ryan Klimek (5 catches, 89 yards, 2 TDs) for touchdowns on PV’s first two drives and Michael Poruban (5 catches, 66 yards, TD) on the third to go up 21-7.

Rasheem Grayson made it 42-14 with a touchdown run on the Vikings’ third drive of the half for 21 unanswered points, effectively sealing the game with 8:41 to play.

“I think that was important for us to get the ball after half and go down and score, just to kind of regain some of the momentum we had lost there in the second quarter,” PV coach Rob Heist said. “CB East is an extremely well-coached team. … They were gonna grit and fight until the very end, so we needed to regain that momentum and go back up two scores where we felt comfortable from that point.”

Perk Valley appeared ready to roll the Patriots early on, going seven plays for 47 yards on its first touchdown drive after the Vikings’ defense forced a CB East three-and-out to start the game.

When the Patriots turned the ball over on downs at the PV 27 on their second drive of the game, Kohler marched the PV offense down the field once again, connecting with Klimek on a 40-yard touchdown with 2:15 left in the first to go up 14-0.

Central Bucks East responded on its next drive when Ethan Shine (31 carries, 153 yards, TD) ran into the end zone from one-yard out. The Patriots’ defense forced a pair of turnovers — a fumble and an interception by senior Connor Callaghan — before junior quarterback Pat Keller (8-for-22, 76 yards, two total TDs) scored on a bootleg run to cut the deficit to 21-14 at half.

“We’ve got a bunch of fighters,” CB East coach John Donnelly said. “We’ve faced adversity throughout the year, and we’ve been able to overcome it. We had a lot of momentum coming into the half and had been running the ball really well. That’s been our M.O. all year. We tied it up, felt good about it at halftime and came out and just had really difficult time. They’re a really high-powered offense.”

Perkiomen Valley’s Zach Schimpf (26) gets congratulated by teammate Jeremy Brewer (8) after making a pass break up on fourth down during Friday’s District 1-6A playoff game against CB East at PV. (Owen McCue – MediaNews Group)

After scoring on their first three drives, Kohler and the Vikings’ offense ended the first half with a fumble, interception and three-and-out.

They didn’t have another non-scoring drive until their final possession of the game when they ran the clock out. PV opened with a nine-play 63-yard touchdown drive and then after a Carson Pascoe blocked field goal, drove 75 yards on eight plays to set up Kohler’s second rushing score of the second half.

“It was just cleaning up mental mistakes,” Kohler said.

Coming off a 1-5 season in 2020, CB East reached the District 1 playoffs for the fourth time since 2015 after a decade absence from the district postseason.

The Patriots are now 0-4 in those postseason opportunities, but Donnelly feels his team’s first playoff win since 2005 is coming soon.

“It’s hard to say goodbye to the seniors, they’ve done so much for us,” Donnelly said. “But since 2015, this is our fourth trip to the playoffs and in 2019 we missed it by like 10 points. We’re earning the right to be here, we just gotta advance. We’re getting closer. I know the score might not reflect it, but our team has a lot of confidence, and we’re going to keep building.”

Perk Valley is a win away from its deepest trip in the postseason since 2016, when it won two games and advanced to the District 1 semifinals.

The Vikings led Coatesville 27-14 at halftime in their meeting earlier this season before watching the Red Raiders score 21 unanswered points in the second half.

“They’re a great team over in Coatesville,” Kohler said. “They’re always a great program. We lost to them earlier in the season, so it will be a great game.”

Starts Up Front >> Friday night was Perk Valley’s seventh consecutive victory after a 2-2 start. Heist pointed at the development of his offensive line, which lacked some experience prior to the season, as one of the major reasons the Vikings are still playing in November.

“I think it’s steady progress,” Jonassen said. “Our relationship has been growing since Week 1. We’re real tight off the field, and I feel like that transitions to on the field. We work together, we pick each other up.”

NOTES >> Dawson Debebe added four catches for 36 yards and Andrew Beck added three catches for 27 yards along with six carries for 37 yards for PV. … Matt LaBouliere was Keller’s top target, catching three passes for 29 yards. Shine also added a 23-yard touchdown catch to end the game’s scoring. … Vance Junker and Bryan Helenski both had sacks for PV. … Klimek was a perfect 7-for-7 on PATs.

Shanahan outlasts Chichester to reach 4A title game
Conestoga gets a taste of ‘Tubby’ time as Ridley moves on
Loading Comments...
Comment
×