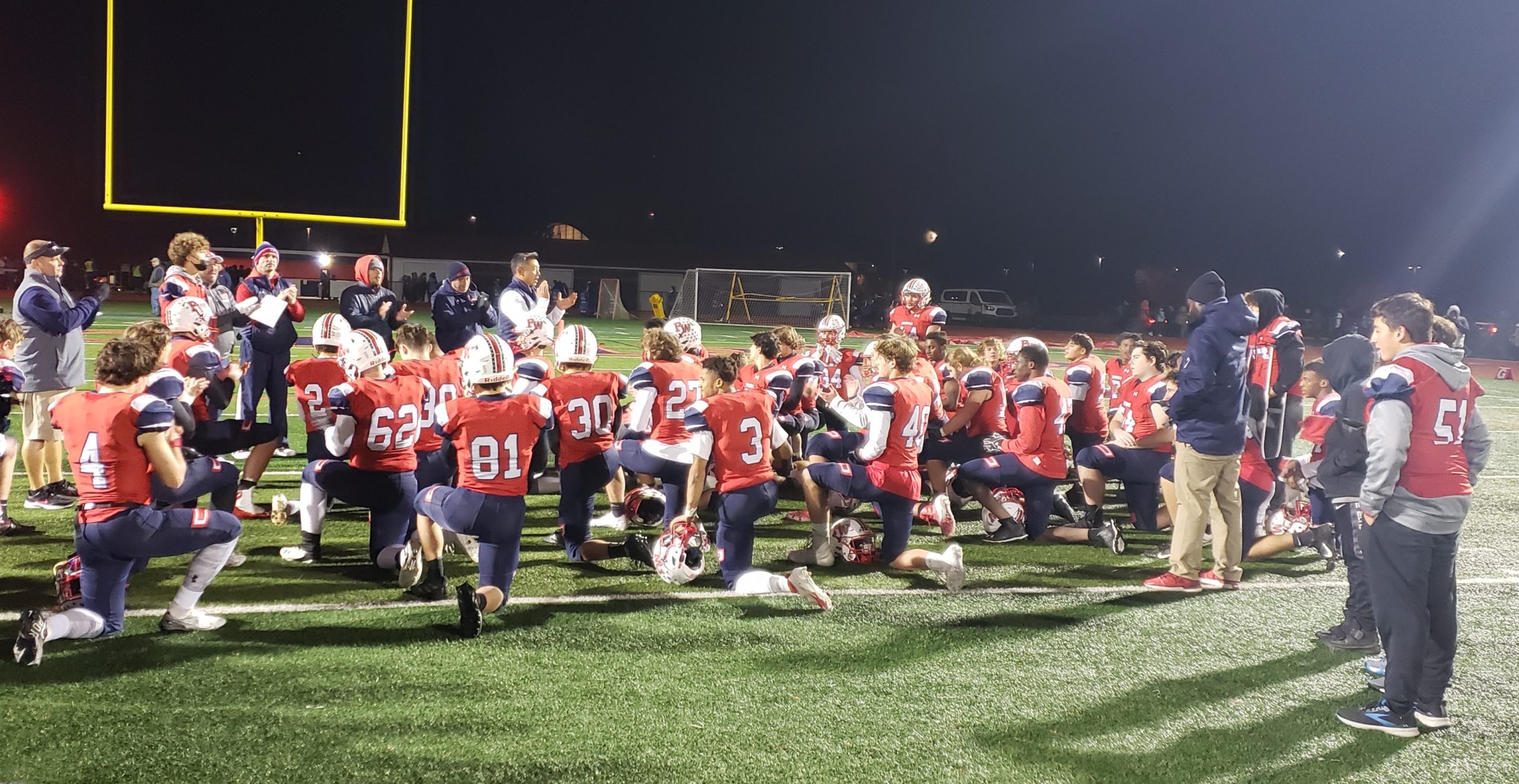 WHITEMARSH >> When Plymouth Whitemarsh and Cheltenham met last month, the Colonials walked away with a hard-fought eight-point win.

In the rematch in the first round of the District 1-5A playoffs, No. 5 PW left no doubt. The Colonials scored 14 points before the 12th-seeded Panthers touched the ball and led by 28 points at the end of the first quarter on their way to a 49-0 win at Plymouth Whitemarsh High School Friday night.

“Our guys came ready to play tonight,” PW coach Dan Chang said. “They had a great week of practice, led by our seniors, and all three phases of those guys were executing well. Our energy was high. I thought we just played tough all around.”

Plymouth Whitemarsh faced a 3rd-and-12 on the third play of the game. Quarterback Aiden O’Brien threw a long pass down the middle to Phil Taormina, who made the catch and ran to the end zone for a 77-yard touchdown.

The Colonials followed with an onsides kick. Kicker Seve Spruill tapped the ball 10 yards along the ground and recovered it himself.

“Seve Spruill is very, very dangerous,” Chang said. “He can put the ball on a lot of places in the field and make it look the same all the time. He kicks a great ball there and he recovers it himself. You saw at the end, he’s an athlete. He’s a running back for us, too, so he can fly and he’s physical. That was a great play by him right there.”

Five plays later, the Suburban One League American Conference champions faced another third down. On 3rd-and-6, O’Brien found Nate Kern, who broke a tackle and raced 16 yards for a touchdown to make it 14-0.

After Cheltenham fumbled on their second play from scrimmage, PW took over 35 yards away from the end zone. It took three plays to get their – with O’Brien rushing for 12 yards to make it 21-0 just 4:21 into the game.

The Panthers returned the ensuing kickoff to PW’s 14-yard line, but failed to convert on a 4th-and-13. The Colonials responded with a seven-play, 83-yard touchdown drive. O’Brien hit Taormina again, this time from 29 yards away, to make it 28-0.

O’Brien finished the first quarter 4-for-5 passing for 148 yards and three touchdowns plus 38 rushing yards and a score on six carries.

“Coach Chang put together some good plays that we knew would work based on what we saw the last time we played them,” O’Brien said. “We were just able to capitalize on that.

“I was feeling great. I wanted to throw the ball a little more. I feel confident throwing the ball even though we’re a triple option team. We can still throw the ball.”

“(Cheltenham was) taking away some things in our running game,” Chang said, “bringing a lot of guys into the box. We saw some things that we thought we could take advantage of and Aiden threw some good balls. Phil caught a couple tough balls, made a great play to score on that first touchdown, Nate Kern makes a great play after catching the ball to get into the end zone, Jared Kolsun makes a great catch over somebody in the middle of the field. Not only is Aiden putting the ball where he needs to, but our guys are going up and getting it.”

The Plymouth Whitemarsh defense posted its second shutout of the season after blanking New Hope-Solebury back in September.

The Colonials held the Panthers to four first downs and 57 total yards.

“All week we studied film and executed in practice,” linebacker Tommy Hannon said. “It was all about coming out here and executing our gameplan, working as a team – same thing every week.”

“We had already seen their offense and their defense,” O’Brien added, referring to the 21-13 win on Oct. 8. “Coaches put together a great gameplan and we knew what to expect. They couldn’t really do much once we put up three touchdowns in a row.”

PW’s defense recovered four fumbles, including one returned for a touchdown by Thomas Montemayor in the third quarter, and Hannon intercepted a pass.

“(Turnovers) are big,” Hannon said. “Helped us keep the momentum. It’s all we could ask for, really.”

In the District 1-5A quarterfinals next weekend, PW will face No. 4 Upper Dublin. The Colonials and Cardinals were long-time SOL American rivals before UD joined the SOL Continental in 2020.