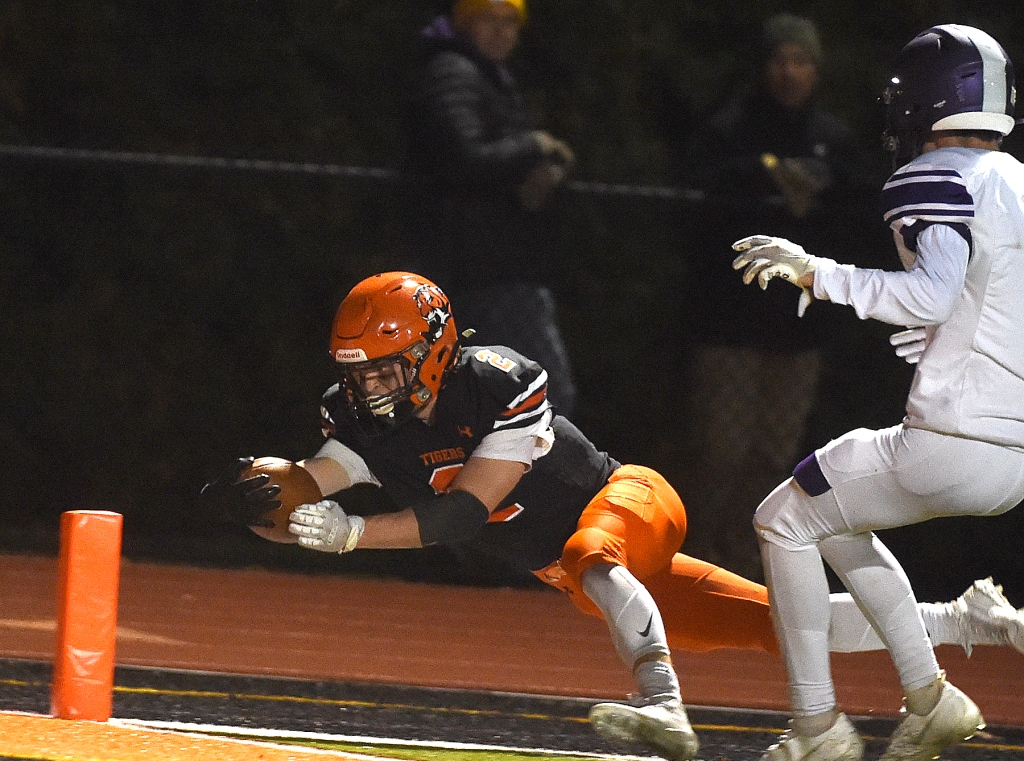 Marple Newtown's Charlie Box, left, dives for the end zone in the first half Friday night against Phoenixville. He was called out of bounds at the 1, but the Tigers would score on the next play en route to a first-round district playoff win. (PETE BANNAN - MEDIANEWS GROUP)

NEWTOWN SQUARE — When Charlie Box hit the turf at the 1-yard line, he wasn’t thinking about the throbbing in his right ankle. The Marple Newtown running back’s first thought was anger that his ankle didn’t get rolled up one yard later.

Once he’d been attended to and limped off, the usual calculus for the Tigers’ workhorse settled in: If everything’s still attached, Box was going back in.

“I was like, I’m going to go,” Box said. “It could be my last game ever, so I’m not missing it for the world. … Not playing didn’t cross my mind. You’d have to cut off my leg for me not to play.”

Box gritted it out, running 32 times for 180 yards and a touchdown to lead the seventh-seeded Tigers to a 21-14 win over No. 10 Phoenixville in the first round of the District 1 Class 5A playoffs.

Though he only got to the end zone once, he did the hard work that set up David Bertoline’s two one-yard TD sneaks. The first came after a 21-yard dash to the four. The second culminated five straight Box runs for 29 yards before he came up gimpy.

“It was super painful,” Box said. “My ankle is killing me right now. But I’m so happy we got the touchdown there. I’m proud of my boys. When I went down, they really took over and held their own.” Marple Newtown’s Paul Defruscio is feeling it after intercepting a Phoenixville pass in the first half of what would be a 21-14 Tigers victory in the first round of a District 1 Class 5A game. (PETE BANNAN – MEDIANEWS GROUP)

As if there was any question that Box would continue, the Cornell lacrosse commit got re-taped and stretched to reduce the swelling at halftime. He took his first two carries for 18 and 11 yards, and the Tigers were off and running.

Box was at the center of the swing that led to Phoenixville’s first score. He’d taken a wildcat snap 54 yards on Marple’s first play to set up first and goal. But on the next down, a shotgun snap eluded him. Sam Moore batted the ball backward, allowing Hayden Tenbroeck to scoop and dash 81 yards for a score.

“It felt great. Sam Moore made a great play, knocked it out,” Tenbroeck said. “I saw the ball, picked it up and got to the end zone as quick as possible.”

The Phantoms entered halftime down just 14-7 despite the Tigers (8-3) starting four drives in plus territory, including a first and goal at the 7 on which they came up empty.

Defruscio made the first big play of the second half, as Phoenixville used 10 plays to reach the 28. The sophomore leapt high for a jump ball in the front corner of the end zone, taking it away from Moore.

“I turned around and the ball was in the air,” Defruscio said. “I just went up and got it. … I feel like it was a big momentum change. I feel like we built a lot of momentum off that.” It would set up the decisive drive, a 13-play, 80-yard march by the Tigers. Box carried nine times, including a recovery of his own fumble at the 30. Bertoline, who went just 2-for-9 through the air, found Eric McKee for 31 yards on third and 11.

Phoenixville would threaten, thanks to a 48-yard field-flipping run by Tre Davis. That set up Tenbroeck’s fantastic over-the-shoulder grab from fellow sophomore Ty Romance on fourth and goal from the 3 with 4:01 left.

“I think just coming here and playing in this playoff game, it really showed us that Phoenixville is a team to worry about,” Tenbroeck said. “It’s not an easy win on the schedule. It’s a team that, you really need to work for.”

That Marple did, with Bertoline’s bootleg for 17 on third and six allowing the clock to run down, setting up a game with No. 2 Strath Haven next week.