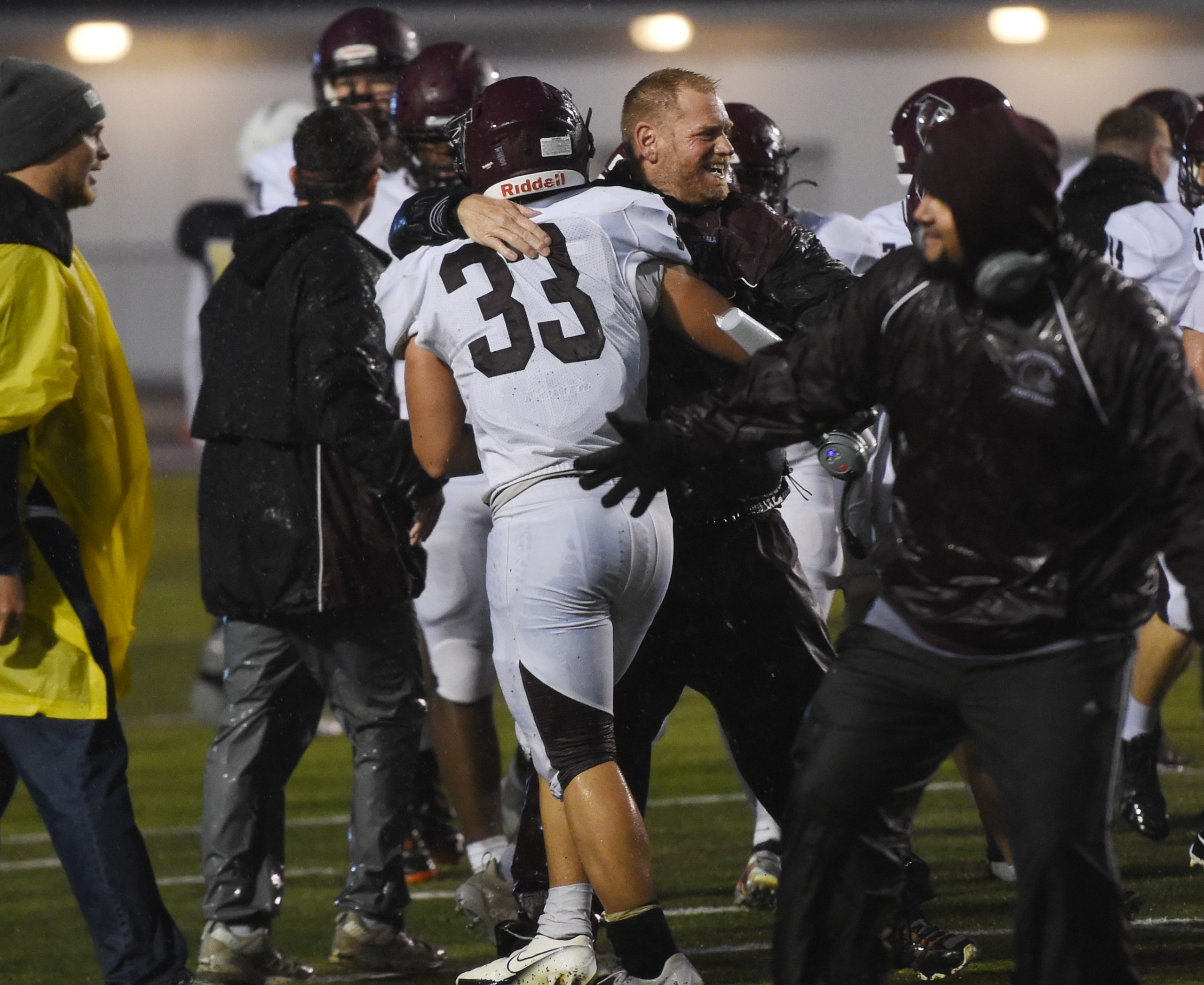 It was just about time to say goodbye.

Down 13-0 and unable to generate much offense all night, Pottsgrove found itself in dire straits midway through the fourth quarter of Friday’s crossover game at Spring-Ford. A loss, they knew, would mean the end of the 2021 season, and for the senior class the culmination of their high school careers.

But after converting a short punt into their first score of the evening, the Falcons traversed 74 yards in just over two minutes and hit pay dirt when quarterback Ryan Sisko hit Tyler Kaufman with a 23-yard pass with only 17 seconds remaining. Landon Shivak’s extra point gave Pottsgrove (7-2, 5-1 PAC) an improbable 14-13 victory, and indeed saved their season, which continues Friday night against Upper Moreland at the Falcons’ Pennypacker Field after earning the No. 2 seed and a home game in the District 1 Class 4A playoffs.

Senior quarterback Ryan Sisko was 3-for-3 passing on the deciding drive for 56 yards, including the scoring strike to Kaufman. The performance demonstrated the moxie and leadership Falcons coach Bill Hawthorne has come to expect from his leader.

“We were having trouble moving the ball,” Hawthorne said. “But Ryan’s decision-making made the difference. He scrambled for first downs, got out of bounds, saved our timeouts – to say Ryan’s a heady football player is a total understatement.”

Sisko didn’t even see the end of the deciding play, withstanding a hit from a Rams defender. But Kaufman was able to tell him all about it in the postgame celebration.

“I know I like him in a (one-on-one) matchup every day,” said Sisko. “I threw it, I got up and I look and he’s in the end zone celebrating. It was nuts.”

That was just the start of the craziness. Results around the area combined to not only move Pottsgrove into the four-team playoff field but allow them to host a first-round game as the No. 2 seed this coming week. But they had to take someone’s spot to do it, and that team was only a few miles away at the time.

Pope John Paul II (7-3, 5-1 PAC) had just finished a nightmarish offensive evening in a 30-0 loss to Perkiomen Valley in the PAC championship game. The performance – impacted considerably by the rain and wind that engulfed the area Friday night – was not at all representative of the Golden Panthers’ capabilities, though the champion Vikings’ defense had plenty to do with it as well.

Nonetheless, a 7-3 record and 136 power ranking – a mark that would’ve had PJP easily into the postseason in either of the two larger classifications – would leave the Golden Panthers short of qualifying in the four-team 4A field, losing out to a Chichester squad that finished with two fewer victories (5-3) but benefitted from victories over schools in larger classifications.

“That’s a great football team, and they 100 percent deserve to be a playoff team,” Hawthorne said of the Golden Panthers team who’d defeated his Falcons for the Frontier Division title just one week ago. “It’s a darn shame to see them out of the playoffs; they certainly deserve to be there.”

Whether on the field on in the record books, it’s hard to dispute that PJP is the best team in District 1 to not qualify for the postseason. They won’t give out any awards for that distinction, but when looking at teams who qualified for the playoffs (in other classifications) with records as low as 3-7, it certainly begs the question of whether there might be a better way.

For Hawthorne and the Falcons, however, it’s onto next week and Upper Moreland. After coming so close to seeing their season end, the Falcons plan to make the most of the opportunity and of every Friday night they have left as a team.

“We have mistakes to correct, we’re focused on ourselves,” said Hawthorne. “But this senior class exemplifies Pottsgrove football – they bring it every day, and I couldn’t be prouder or happier for them.” In the aforementioned PAC championship game, Perkiomen Valley caused four turnovers in limiting PJP’s offense to 67 yards in a 30-0 victory to claim the school’s fourth PAC title in six years. QB Ethan Kohler and RB Andrew Beck each rushed for over 100 yards as the Vikings were able to assert their will on the ground throughout the second half, even with the threat of Kohler’s arm neutralized by the weather.

Despite the disappointing loss to Pottsgrove, Spring-Ford will join the Vikings in the Class 6A field. The 6-4 (4-2 PAC) Rams will travel to Downingtown East for a rematch of an opening-round game from three years ago at Coach McNelly Stadium. The Cougars took that one, 39-12.

The third and final local team in the 6A field will be Owen J. Roberts, who hopes to bounce back from Friday’s 6-2 loss to Phoenixville. The Wildcats (6-4, 3-3 PAC) will travel to perennial power No. 3 Coatesville.

As for their Friday night opponents, the Phantoms (5-4, 4-2 PAC) power into the postseason on a four-game winning streak, good enough for the No. 10 seed in Class 5A. They will take on Marple Newtown of the Central League in Newtown Square Friday.

Boyertown edged Upper Merion, 20-19, in another nail biter Friday. The victorious Bears (4-6, 2-4 PAC) will see their season continue this week in the Eastern Conference championship with Fleetwood, while Upper Merion (4-6, 2-4 PAC) claimed the No. 15 spot in Class 5A, which means a trip to Wallingford and No. 2 seed Strath Haven of the Central League.

Methacton wrapped up the 2021 campaign with a shutout win over Upper Perkiomen, 24-0. Dan Brandi carried for three touchdowns in his final game for the Warriors (5-5, 2-4 PAC) and classmate Brian Dickey set the team’s single-season reception record. Upper Perk ends the season at 2-8 (1-5 PAC).

Norristown took some momentum into 2022, ending the season on a two-game winning streak after a 29-0 victory against Pottstown.

Despite a tumultuous ending to the regular season that saw their final two contests cancelled for COVID protocols, Daniel Boone (5-3) claimed the No. 12 spot in the 14-team field in District 3 Class 5A and will travel to Waynesboro this coming Friday.