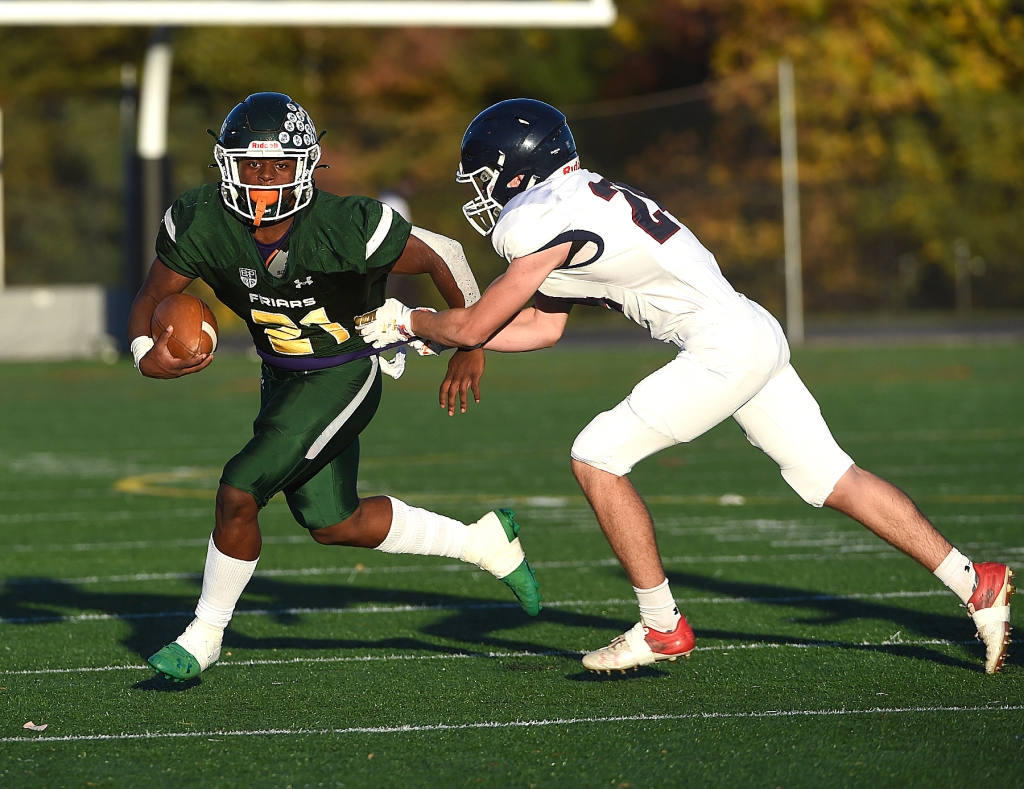 UPPER DARBY — Bonner-Prendergast clinched its spot in the District 12 Class 4A final nine days ago with a victory on the road against Archbishop Ryan.

The real celebration ensued Monday on Lansdowne Ave. On senior day, the Friars capped an eight-win regular season with a 31-12 decision over rival Cardinal O’Hara.

While the visiting Lions entered play on a three-game skid, they were far from pushovers. Coach BJ Hogan had his guys ready to roll three days after the game was postponed due to inclement weather.

“It wasn’t easy,” B-P coach Jack Muldoon said. “O’Hara is obviously a very well-coached team. You watch film on them, they were in every game. They have some good players. I said to (Frank) DiDio, “Man, you have my vote for All-Catholic.’”

DiDio, a senior wide receiver, burned the Friars on two long touchdown catches, one in each half. Quarterback Jacob Carbin connected with DiDio on a deep route for a 78-yard score to tie the game at 6-6. In the third quarter, the pair struck again as DiDio ran a fade and hauled in a catch in the end zone to tie the game 12-12.

“He’s such a big-time kid,” Muldoon said. “That’s a young team over there and they’re going to be better. They played one game last year because of COVID. We didn’t see them last year, which was weird. So, it was good to get this rivalry back going again. I was proud of the way we kind of managed the game a little bit and we were able to battle until the end.”

For the majority of three quarters, it was a defensive slugfest. The Friars had trouble establishing senior running back Mason Peterson, who is closing in on the school’s single-season rushing record. Until the final minute of the third quarter, the electric, bruising back was limited to 47 yards on 16 carries. The O’Hara defensive line of Edmund Wisseh, Brian Stratton, Julius Greene and Xavier Lozowicki consistently caused havoc in the backfield.

But it was only a matter of time before Peterson caught fire. Even the biggest defensive lines — and O’Hara is certainly blessed with plenty of size and strength — have difficulty containing Peterson the entire game.

“Their D-line was very good,” Peterson said. “They were able to get to the backfield and stop me. It was one of my tougher running games. … It was a close game going into the fourth quarter, and I knew what I had to do.”

With the game knotted at 12, the Lions started their final drive of the third quarter at the 1-yard line. Three plays later, Carbin threw a pass on a corner route into coverage. Senior defensive back Isaiah Sessions came away with the interception. Then Peterson finally got rolling, ripping off runs of 16 and 14 yards to score the go-ahead touchdown. On his second run, Peterson barreled straight ahead, juked a defender, and waltzed into the end zone. It was the second of three scoring runs for Peterson, who finished with 92 yards on 22 carries.

On O’Hara’s next possession, Myles Reynolds had a sack of Carbin on third down, forcing a punt. The Lions defense got a stop by stuffing Peterson on a fourth-down run. But the Lions, still down six points in the fourth quarter, were unable to make anything happen with the ball. Sessions recorded a sack to force another punt, then quarterback Shane Mulholland darted 44 yards for a touchdown to give the Friars a 24-12 lead. Peterson sealed the victory with a 12-yard scoring jaunt with two minutes to play.

Carbin, who suffered an injury in the fourth quarter and did not return, completed 8 of 13 passing attempts for 206 yards. DiDio had four catches for 130 yards. But overall, the offense didn’t do nearly enough and committed four turnovers. The Lions have scored more than 14 points only twice this season. They may have a contingency game lined up in two weeks with Springfield, but only if the Cougars lose their first-round district playoff game Friday at Unionville.

“We haven’t been scoring all year and 12 points isn’t going to get it done. But I thought from an effort standpoint, for three quarters, our kids played their tails off,” Hogan said. “We had stupid penalties that really put us behind the sticks and too many turnovers. We’ve been preaching it all year. We’re just too lackadaisical with the ball in our hands … and that reflects in our record. We’re probably second or third in the league in turnovers. If we take care of the ball, maybe it’s a different story.

“For the last three weeks the kids have been practicing and playing really hard, and I’m really happy with it, but we’re just not seeing the results on Friday and Saturday.”

Or, in this case, a late Monday afternoon.

The Friars will prepare to play Bartram for the District 12 Class 4A title at a neutral site in less than two weeks. Last year the program was two wins away from a PIAA championship, but a positive COVID-19 test canceled their season. They were replaced in the state tournament by Archbishop Ryan. This year the Friars had to show every week they were ripped off. The liberation process began in earnest Monday evening.

“It shows our hard work,” Peterson said. “We’re able to prove a lot of doubters (wrong), people saying that our schedule was easy last year with COVID , but we showed that we can play a full schedule. Next week, we have a bye, so hopefully (afterward) we can go out there and show what we’ve got.”