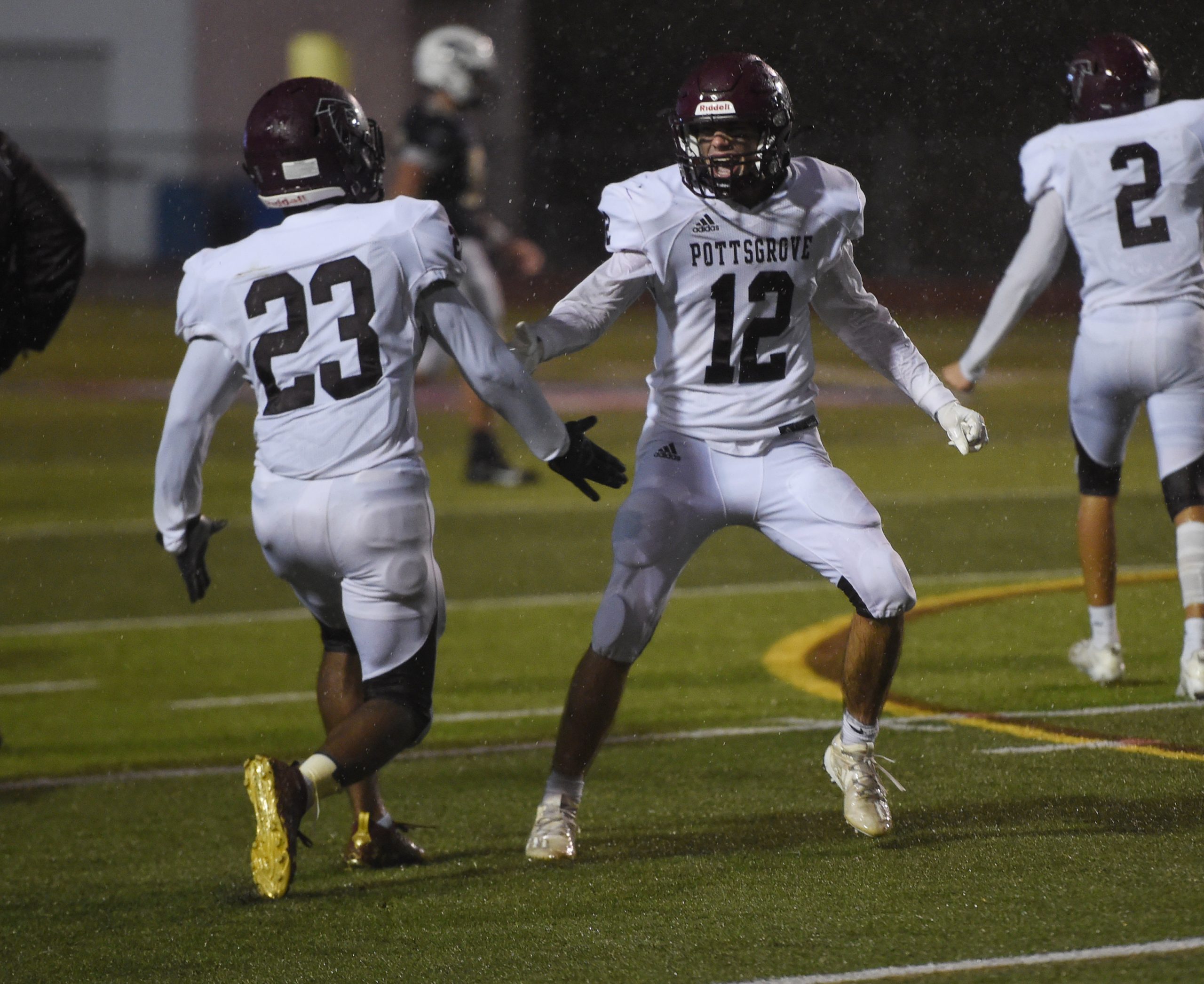 ROYERSFORD >> It looked like somewhat of a Hail Mary, a jackpot toss, more hope than expectation.

But Pottsgrove quarterback Ryan Sisko knew the likely result of his pass even before he threw it.

While taking a hit that knocked him to the ground, Sisko let the ball fly. By the time he got to his feet, teammate Tyler Kaufman had the ball in his hands in the end zone celebrating a game-tying catch.

“I know I like him in a matchup everyday,” Sisko said. “I know if I throw it up, he’ll come down with it most of the time, and I threw it up and then got up and I look up and he’s in the end zone and we’re all celebrating. It was nuts.”

Ryan Sisko’s TD pass to Tyler Kaufman in the final seconds gave Pottsgrove a 14-13 win over Spring-Ford on Friday. pic.twitter.com/rKOfBEgXe7

The Falcons’ came into Friday’s regular-season finale against the Rams needing a victory to secure a spot in the District 1 Class 4A tournament and keep their season alive.

They rallied from 13 points down in the fourth quarter to extend their 2020 campaign and pick up a win over one of the PAC’s big boys during PAC Crossover week (started in 2016) for the first time.

“All these people around here telling us we won’t win, we don’t have a chance, anything like that,” Kaufman said. “We proved them all wrong today.”

Spring-Ford struck first in the game when Ryan Freed tossed a three-yard score to Jseth Owens to go up 7-0 with 3:37 left in the first half.

The Falcons trailed 13-0 early in the fourth quarter after Rams’ running back Harry Adieyefeh — the game’s offensive standout with 131 yards rushing — punched in a one-yard touchdown run.

Pottsgrove went scoreless on its first eight drives of the game, but found a way to put together two touchdown drives to finish it.

“Something my dad always says is, ‘It’s not over until it’s over,’ and that’s something my coaches preach too,” Neeson said. “In the locker room talking to the guys being down 7, being down 13 there was still a lot of football left to play. So as long as we do our jobs and get our jobs done, we can come back from everything.” Pottsgrove’s defense forced a second-straight Rams’ three-and-out to get the ball back following Neeson’s touchdown.

With his team trailing 13-7 with 2:21 to play and the ball at its own 26-yard line, Sisko marched Pottsgrove 74 yards in seven plays on the game winning drive.

A 14-yard pass to Kaufman and 19-yard toss to Riley Delp, who had a 26-yard grab on the team’s first touchdown drive, moved Pottsgrove into Rams’ territory.

After two Sisko scrambles took the Falcons to the Spring-Ford 23 with 20 seconds to play, the quarterback put a deep ball on the money to an open Kaufman in the endzone for what proved to be the game-winner.

“We were just going in the huddle, and coach said all verts with like 18 seconds left,” Kaufman said. “I just looked at Ryan and we both looked at each other. We knew what was going on. We do it in practice every day. He put the ball up there, and I went for it.”

After completing just one his first six pass attempts, he finished 6-for-11 for 98 yards, going 3-for-3 for 56 yards on the game-winning drive

“There’s probably not a quarterback I could be more proud of in my years coaching here,” Pottsgrove coach Bill Hawthorne said. “He had some tough times in the get-go, but all he did was fight through. He has some resiliency like I’ve never seen before, and in the end he got the ‘W’ for us.”

The Rams’ defense held Pottsgrove to a 121 total yards of offense, including 34 in the second half, before the Falcons’ final two drives. Cole Turner and Carson Bogdan both picked off passes and the Rams also recovered a pair of fumbles and blocked a field goal and two punts in the game.

Spring-Ford looked in control up 13-0 in the fourth, but Pottsgrove’s defense forced three consecutive three-and-outs following the Adieyefeh touchdown and the Falcons’ offense clicked at the right time against a Rams’ defensive unit that allowed a total of 17 points in its previous four games.

“They threw and we didn’t and that’s on me,” Spring-Ford coach Chad Brubaker said. “The game’s on me.”

“The defense played great,” he added. After allowing the Rams to gain 145 yards of offense, including 116 on the ground, in the first half, Pottsgrove’s defense tightened up after the break.

Outside the 10-play, 67-yard touchdown drive, the Falcons held the Rams to a combined 14 total yards on their other six second-half drives.

“We don’t have big star players, but we know how to play,” Pottsgrove senior Shane Caffrey said. “We came to play in the second half, and that’s what happened.”

“It means everything, This is what we play for all season. Just try to keep pushing, keep winning so we can keep playing.”

Spring-Ford was uncertain of the status of its season as it exited the field Friday night, but the Rams appear to be locked into the postseason despite Friday’s loss, ranking No. 13 in a 16-team District 1-6A playoff field.

Pottsgrove leapfrogged to No. 2 in the Class 4A field to go from the outside looking in to a potential district playoff host after Friday night’s win, which keeps the season alive for seniors like Sisko, Caffrey, Neeson, Kaufman and Vinny Scarnato.

NOTES >> Freed went 3-for-6 for 29 yards and Matt Zollers went 4-for-9 for nine yards, which included a negative 13-yard reception after catching a pass from himself deflected behind the line of scrimmage. … Will Fish ran seven times for 58 yards and Zach Zollers caught two passes for 37 yards for Spring-Ford. … Neeson ran 12 times for 32 yards, Caffrey ran 10 times for 29 yards and Shivak added 33 yards on a not-by-design fake punt.