Methacton breaks even with 24-0 win over Upper Perkiomen 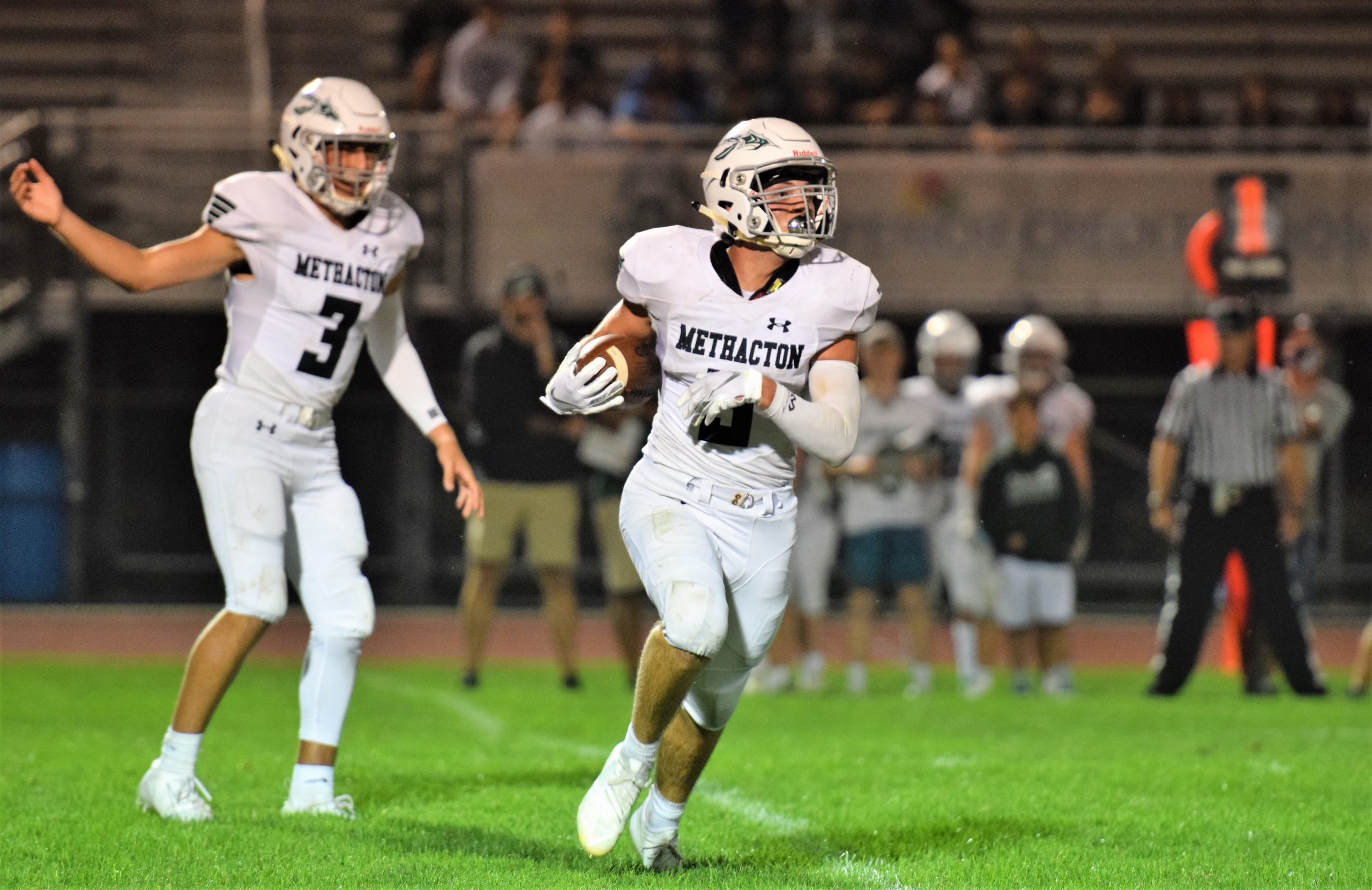 FAIRVIEW VILLAGE >> It had several business matters to address before calling it a season Friday.

Methacton checked the items off one by one during its Pioneer Athletic Conference divisional crossover game with Upper Perkiomen. They all factored in a 24-0 victory over the Indians that sends the Warriors into the off-season with a strong feeling of accomplishment.

One priority was securing the season’s fifth victory for the first time in recent memory, and subsequently finishing with a .500 record or better a second straight year. Another was to get Brian Dickey, already the program’s all-time reception leader, its single-season mark.

Both tasks were accomplished under terrible weather conditions: A heavy rain and driving wind that started before gametime and continued past the final whistle. While the old truism “both teams have to play in it” was very much applicable, Methacton fared better overall.

“The kids had a heck of a time,” Brian Kennedy said upon the completion of his first season as Methacton’s head coach. “They came out excited.”

With the weather prompting both teams to go primarily with a running game, the Warriors rode a three-touchdown outing by quarterback Dan Brandi to a final 5-5 record. It complemented a COVID-19 impacted 2020 campaign of 4-3, continuing their reversal of recent years of losing records.

“The last two weeks, we were disappointed in how we played,” Dickey said, a reference to Methacton’s losses to Liberty Division foes Spring-Ford (39-0) and Perkiomen Valley (41-0). “This was a big win for us.”

It was an even bigger game for Dickey, who came into it needing three receptions to claim the school’s single-season record. Though the weather conditions made throwing the ball an adventure — a risky one, at that — Dickey, with help from Brandi, completed that task … and then some.

Dickey was on the receiving end of all four of Brandi’s completions. The record-tying pass was a 24-yarder that was part of the drive toward the Warriors’ third score; the record-breaker was a 10-yard pass late in the third quarter, part of Methacton’s extensive drive to the UP end zone early in the fourth.

For added measure, Dickey and Brandi added a 30-yard completion to the UP six, from where Anthony Perillo ran for the Warriors’ capping touchdown at the 9:29 mark.

“It was surreal,” Dickey said. “I was worried it wouldn’t happen. But Coach (Steve) Jones, the offensive line and Brandi tried. It surprised me.”

With much of the action taking place in its half of the field, Upper Perk (2-8) found itself unable to sustain any of its possessions. Like Methacton, the Indians went primarily with a ground game in which Logan Simmons (12 carries, 22 yards) was the main producer.

“It’s disappointing,” head coach Tom Hontz said. “We had no traction, and injuries this year. We had a 145-pound freshman playing center because we had nobody else left.

“But I give overall credit to the kids for working hard, and to our coaches for persevering.”

Brandi, who was 4-for-7 passing for 69 yards, cashed in with the Warriors’ ground game. He had touchdown runs of three, one and 17 yards as Methacton took advantage of its favorable field position to pull away from UP in a game marked by a total 11 fumbles — three lost by the Indians, two by the Warriors — six of them in the first quarter.

Perillo finished as Methacton’s leading rusher with 53 yards on 12 totes. Tyler Weil-Kasper and Dean Sapalidis had their team’s longest runs of 22 and 19 yards, respectively.

“We’ll be heavily into rebuilding,” Hontz said. “We have a good freshman class, and our middle school team went undefeated.

NOTES >> In a soggy halftime ceremony, Methacton presented its 2021 Warrior Legacy Award — it’s given each year to a former student/athlete for contribution to high-school sports — to 1981 graduate Gwen Cressman. She earned 12 varsity letters from her participation with the cross country, field hockey, swimming and girls lacrosse teams, most notably a member of Methacton’s undefeated 1981 Suburban One League championship swim team.