Football: Ugly weather night for Sun Valley, then Rustin did the rest 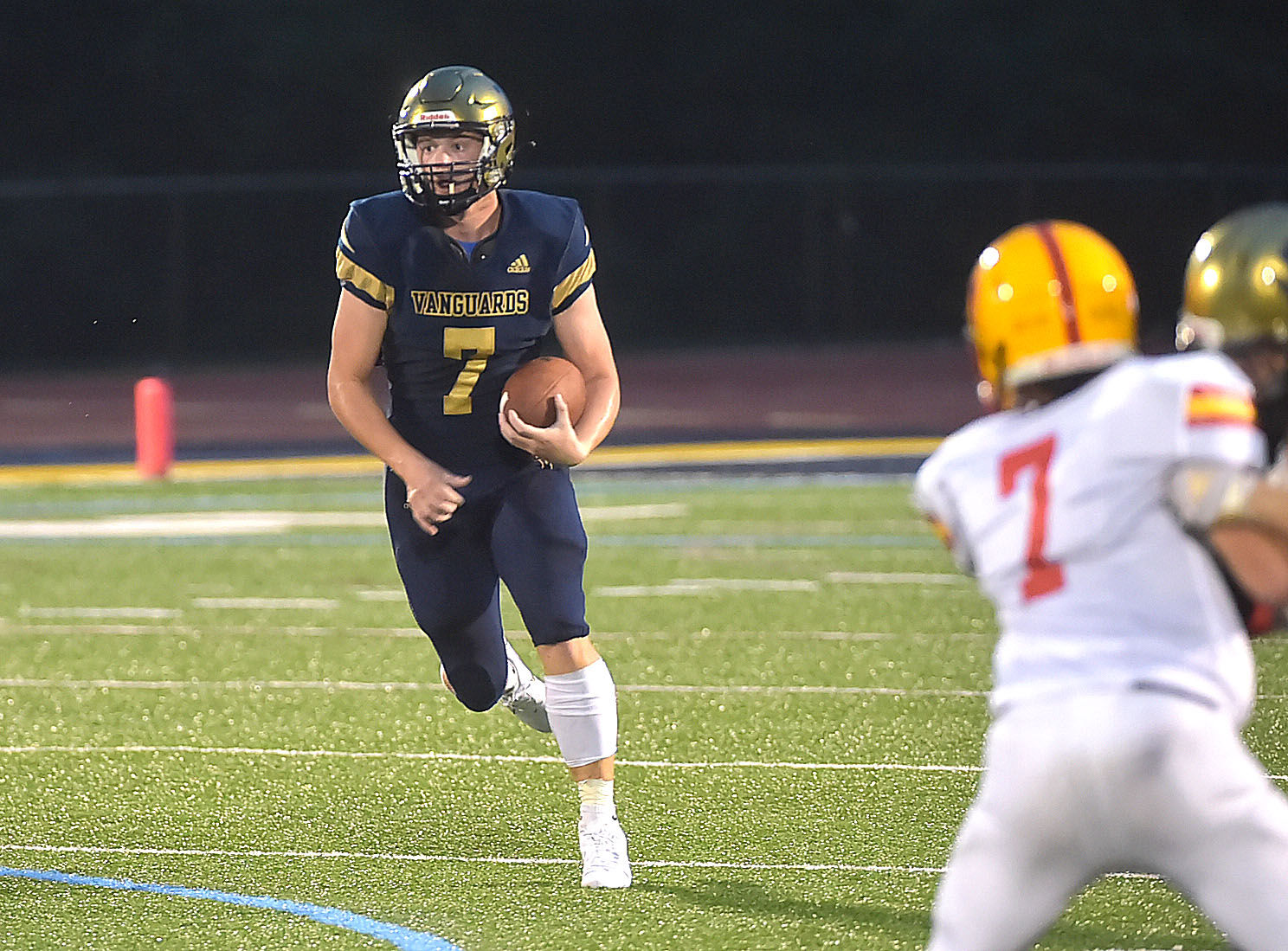 Kevin Mayoros, seen in a game against Penncrest, scored a pair of touchdowns in Friday's loss to W.C. Rustin. (Pete Bannan/MediaNews Group)

WESTTOWN — Unforgettable, that’s what it was.

Not because of the score, powerhouse West Chester Rustin rolling to a 55-24 Ches-Mont American Division win over Sun Valley Friday night.

It was the driving rain, the gusting wind and the survival instincts that took over for both teams while temperatures dropped and all but a few handfuls of fans hustled to the safety of their automobiles after 22 Rustin football players and the cheerleaders were honored on Senior Night. By halftime the ridge overlooking the stadium was jammed with vehicles with their lights on.

“Honestly, we’ll probably remember this the rest of our lives just because of the weather and how crazy the game was,” said Vanguards running back Kevin Mayoros, who scored two touchdowns, including an 83-yarder on his way 130 yards on the night. “It felt like everything was happening in slow motion because of the rain. Everything was like, really slow. It was easier to run but everything was sluggish out there just because it was so wet.”

Truth be told, even the artificial surface was no match for the wet stuff that pooled around the hashes. The rain falling against the lights added to the spooky ambiance.

There were double-digit fumbles, four resulting in changes of possession, including a safety on the Vanguards. There was a holy roller type of touchdown with both teams fumbling the ball around on one play, Jaden Emery scooping and scoring for Sun Valley to complete the scoring with 4:20 left. Rocco Radico also tallied for the Vanguards (2-8, 0-6) in the fourth quarter, but it obviously was too little, too late.

“Bad weather, a lot of people out, a lot of people missing,” Mayoros said. “We kept at it. People had to step up and be big. But the big problem is we were missing like eight starters. We kept fighting to the end.”

The Golden Knights (8-1, 4-1) were formidable from the start in spite of the weather. They rolled to a 33-0 lead so quickly behind Dayshawn Jacobs and his brother Daimon, the only real question was whether the hosts would be a No. 1 or a two seed in the upcoming District 1 Class 5A playoffs.

Dayshawn Jacobs had 11 rushes for 257 yards and four touchdowns. Daimon scored on a 70-yard kickoff return and a 19-yard run.

After Skyler Butcher added a 17-yard run in the second quarter, Dayshawn Jackson lifted off for a 61-yard score to provide Rustin with a 55-6 lead with 3:57 left before the intermission. The subs filled out the game for the Golden Knights and coach Mike St. Clair.

“It was a quagmire, man,” St. Clair said. “It was ugly. It was tough to handle the ball and the game got slow. It felt like everything was loaded with water. But the kids overcame that. We handled it pretty well in the first half. With the weather conditions the way they were tonight I don’t think you’re going to get much out of this game just because of how hard it was to play.”

For Rustin, the next step is the postseason. The Knights likely will host at least one home game and are on a roll with eight straight victories.

“We should have pretty good seeding but once you get in the playoffs, it’s anybody’s game,” St. Clair said. “One or 16 (seed), it’s all the same.”