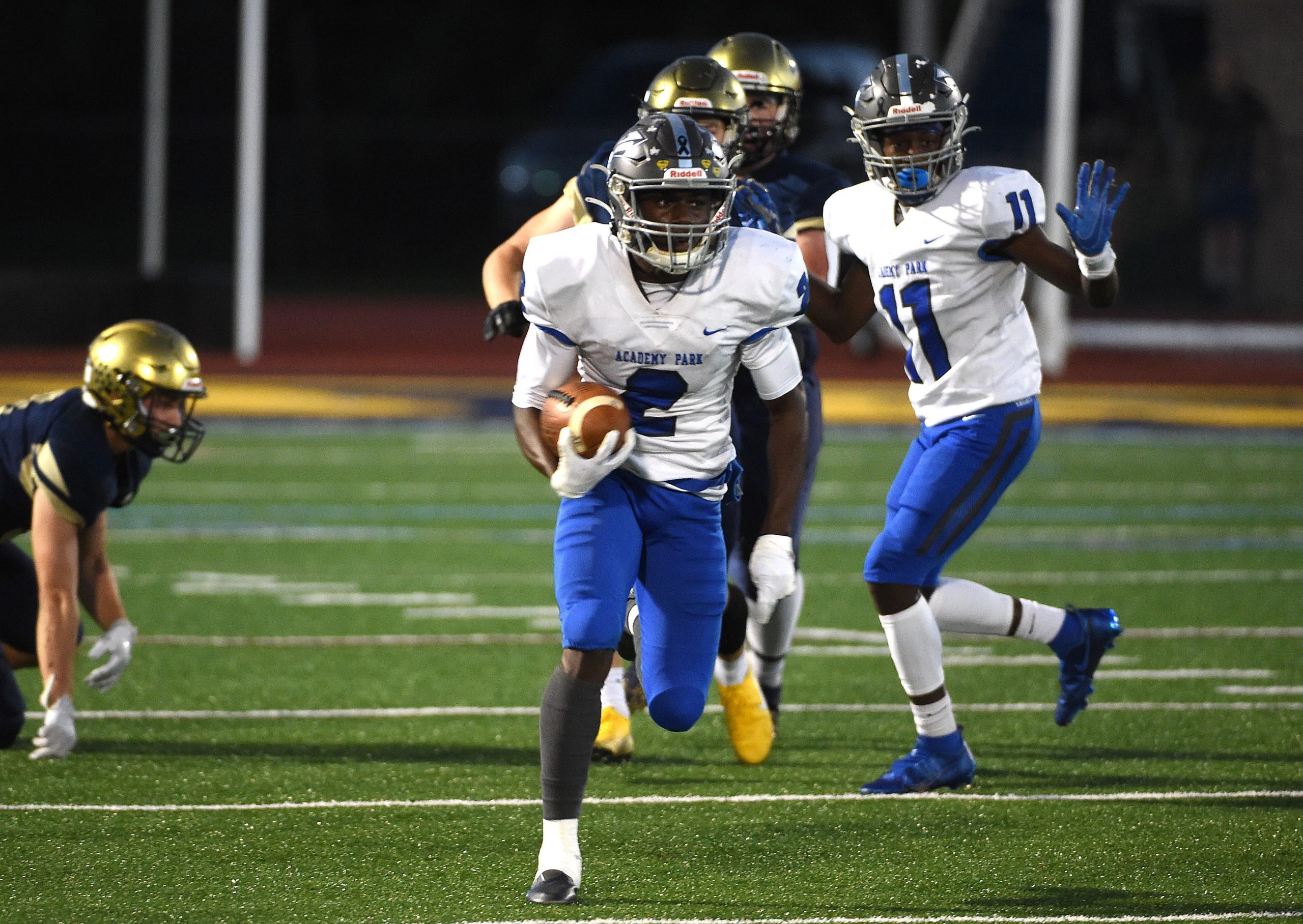 Academy Park's Eric Willis, seen in a game against Sun Valley, ran for a touchdown in a 14-8 win over Chester on Saturday. (Pete Bannan/MediaNews Group).

SHARON HILL — Ibrahim Sanogo’s 8-year-old cousin Fanta Billity was at Knight Park on Aug. 27 to cheer on her big cuz. She should have been in attendance Saturday to watch Sanogo lead Academy Park to victory on senior day.

It was AP’s first home game since Billity lost her life by gunfire moments after the AP’s season-opening win. Sanogo, a 6-2, 215-pound linebacker and running back, has had Fanta’s name written in marker on his wrist tape, and often on his mind, ever since. It’s his way of honoring his lost loved one.

“A lot of pressure was on me, losing my little cousin and coming out here today,” Sanogo said. “It was definitely a little emotional, but at the same time, I’m playing for her.”

Sanogo scored the tie-breaking touchdown in the fourth quarter, diving across the goal line to put the Knights ahead. He also recovered a Chester fumble on a punt return on the final play of the game as the Knights wrapped up a 14-8 victory.

Academy Park (7-2, 3-0) claimed its third consecutive Del Val League title and clinched a home playoff game in next week’s District 1 Class 5A tournament. The Knights will split the league championship with Chichester. Sharing a championship is never ideal, especially in a league consisting of just five schools, but the Knights have bigger goals in mind. AP and Chi were unable to agree on a make-up date for their game, which had been scheduled for Sept. 17.

“Our first goal was to win the Del Val again,” Sanogo said. “Now we are coming for districts, and we believe we can go all the way.”

Saturday’s game with Chester wasn’t pretty. Neither offense could find a groove due to 27 combined penalties. However, Academy Park’s defense was effective in stopping the run and hurrying Chester quarterback Isaiah Freeman (12-for-21, 88 yards), who turned the ball over twice. Sanogo led the way with a sack and a handful of tackles for loss. Junior linebacker Tristan Hodges and senior defensive tackle Jayvon Robinson also flourished.

“Our defense was great,” AP coach Jason Vosheski said. “Any time that either team’s offense got anything going, there ended up being a flag thrown at some point, so that destroys any kind of momentum you have going. … With us, we bank on our defense for always being constant.”

Chester (7-3, 2-2) suffered its third consecutive loss and likely will drop to the No. 8 seed in the District 1 Class 5A tournament. They were the No. 1 as recently as three weeks ago.

The Clippers have struggled on offense during their slide. They haven’t scored an offensive touchdown since a heartbreaking loss to Coatesville Oct. 16. Linebacker Noble Thompson recovered a fumble in the second quarter and sprinted 30 yards untouched to the end zone for Chester’s only score of the day. Last week, the Clippers were shut out by Chichester, 14-0.

AP’s defense had four takeaways and limited Chester to 123 yards of total offense.

“If we come out with energy every time on defense, we’re going to win all the time,” Sanogo said. “Our defense, we can be great and we can stop anybody we go up against.”

Academy Park senior athlete Eric Willis ran 10 yards to pay-dirt in the first quarter for the game’s first touchdown. Willis took the snap out of the wildcat, headed toward the Chester sideline, then made a slick cutback to evade several would-be tacklers. It was one of the best runs you’ll see at the high school level.

“Eric is really fast, really athletic and he’s a smart player,” Vosheski said. “Any time we can get him the ball, he can take off and score.”

“Once I feel the adrenaline, I just want to keep getting the ball,” Davis said.

After the Knights played their previous eight games on the road, it sure was good to be home. And they’ll have another game at Knight Park next Saturday afternoon.

“I know that some of our kids would rather play away on Friday nights because they look forward to it, but that’s hard,” Vosheski said. “With our schedule, because of other leagues being the way they are, we are playing all over the place. We were at (William) Tennent, at Downingtown East and at Avon Grove. Every week. These are not close trips and after a while that starts to wear on you a bit.

“It was nice that our guys were able to come back and play at home.”