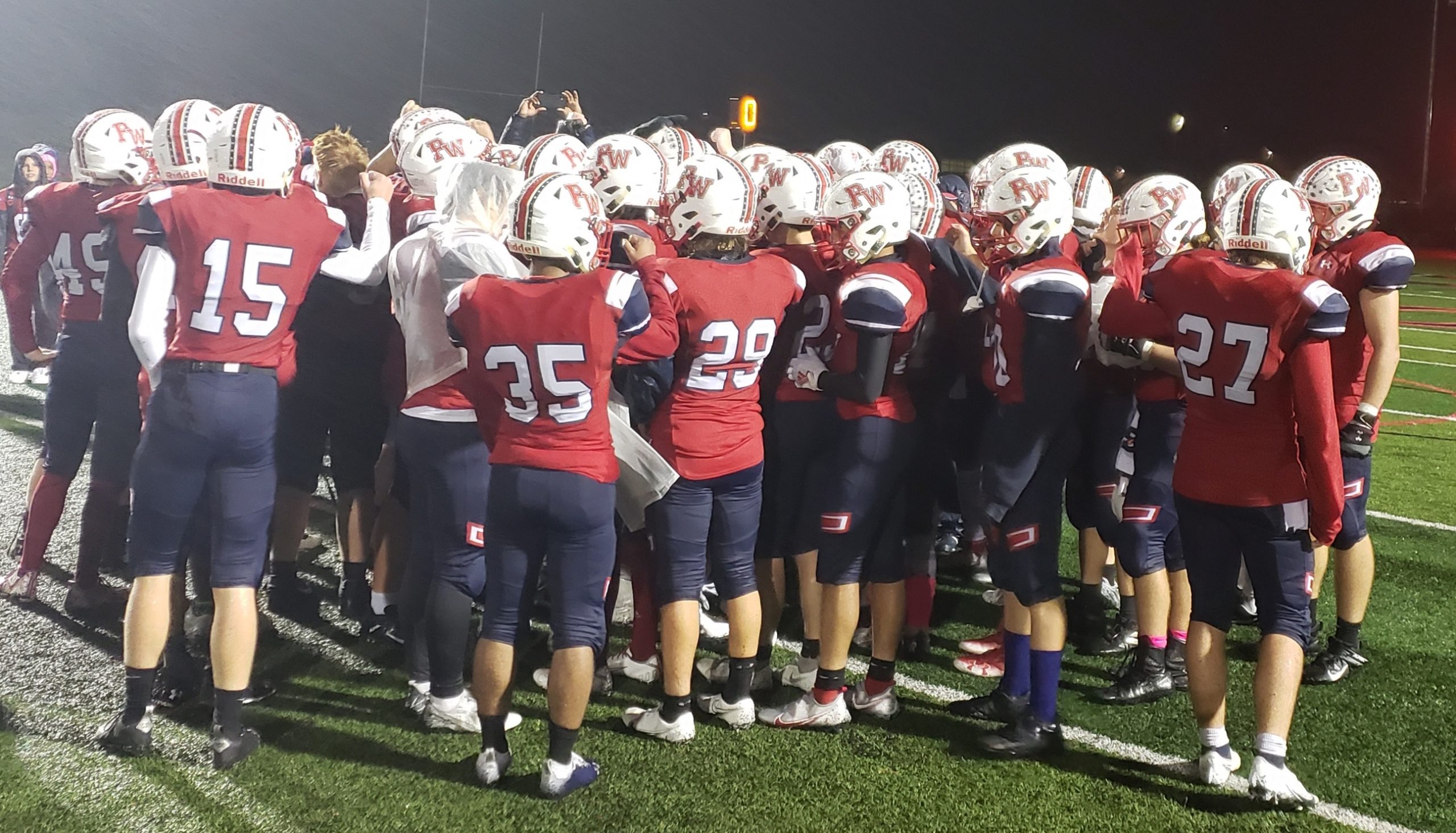 WHITEMARSH >> Plymouth Whitemarsh entered Friday night’s game against Wissahickon knowing it would be hanging a Suburban One League American Conference championship banner for the 2021 season. The only question remaining was whether the Colonials would be outright champions or have to share the league crown.

“It was big for us,” PW coach Dan Chang said. “We talked all week about how we’re happy with the share, but we absolutely want the outright league title. We wanted to go out strong for our seniors on Senior Night. Knowing the weather was going to be like this, not a big crowd or anything, we wanted to make sure we came out and showed up for our seniors.

“Wissahickon definitely throws the ball more than we do,” Chang said, “so the weather was obviously tough for them. We did a good job of minimizing our mistakes with the exchanges and the wet balls. I was pretty happy about that. It came down to our guys up front. We’re coming off the ball, we’re running the ball tough and making some good decisions.”

“We were just doing our normal stuff, running our thing,” PW quarterback Aiden O’Brien said. “They couldn’t stop our o-line. Defense was flying around, making plays. Shoutout to my tight end Jared Kolsun, always making great blocks for me. That’s really all it was. We were just the better team.”

O’Brien totaled three touchdowns in the first half. He scored on the ground from nine and 26 yards away while also throwing a 16-yard touchdown to Dominic Konieczka.

“I was surprised they called it in as a pass play,” O’Brien said of his one attempt on a windy and rainy night, “but it ended up working out.”

Konieczka also scored on the ground with a five-yard run to make it 7-0 early in the first quarter.

Greg Feinberg ran for two first-half touchdowns – 27 and seven-yard scores – while Anthony Iannozzi ran 29 yards to the endzone to give PW a 47-0 halftime lead.

On the first play of the second half, Thomas Montemayor closed out the Colonials scoring with a 57-yard touchdown run to make it 54-0.

None of Plymouth Whitemarsh’s starters played in the second half. The Colonials entered the game ranked No. 5 in District 1-5A and will see where they land when the teams ahead of them finish their regular season games Saturday. Regardless of whether they finish fifth or better they will host a playoff game next weekend.

“We are banged up, definitely, for sure,” Chang said. “We’re going to take this weekend to recover as much as possible and try to get ready. You know whoever we’re matched up with is going to be a great team. We have to get everybody ready to go.”

Wissahickon entered the game ranked No. 17 in District 1-5A, where the top 16 teams qualify for playoffs. The Trojans were still No. 17 after Friday’s slate of games, but some teams ahead of them were scheduled to play Saturday.

Oxford shuts out Henderson in rain-soaked contest
Ragni thrives in the slop, powers Vikings to upset over Kennett