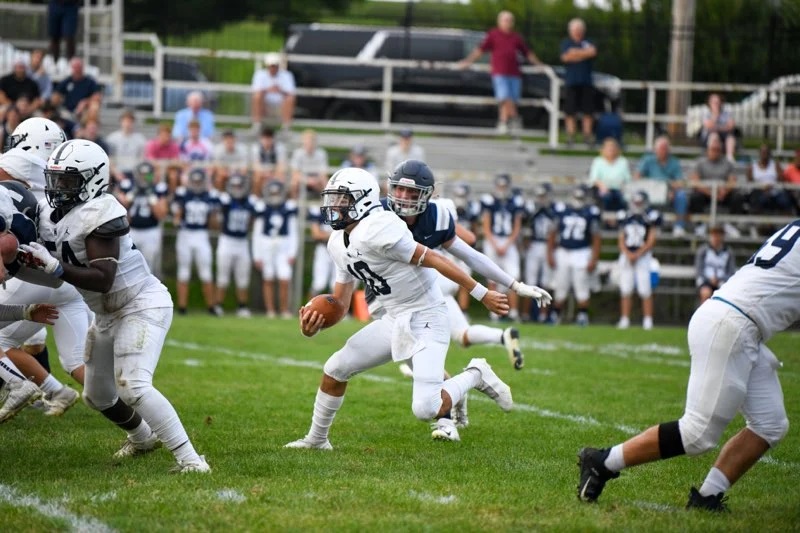 Jake Fant knew something was wrong, but he didn’t stop playing. That’s the competitor in him.

Episcopal Academy’s senior quarterback can recall every detail of the play that led to him being tackled in the first half of a game with Inter-Ac League rival Germantown Academy on Oct. 15.

“It was a broken play, it was a late snap, and I caught the ball and just kind of ran toward where the play was supposed to go,” Fant said by phone on Sunday. “The blocks got kind of blown up and I got met at the line by like, three or four guys on GA, who just started dragging me left and then I got tackled straight on my shoulder, and then this guy on GA kind of finished it off and dove on top of me. That’s when I felt my shoulder go.

“I felt at that second it was kind of bad and if I came out and got evaluated by the trainers that they would know right away that was something was up and I would be taking the chance of missing the rest of my senior season. But at the very second it happened, it’s not like it hurt that bad, I just knew that it was messed up. I’m thinking that I can play through it for as long as possible, so I did.”

The 6-2, 190-pound co-captain of the Churchmen continued playing. Fant knew in the moment that was the wrong choice, but he was effective, rushing for two touchdowns on Episcopal’s next two possessions. It was on the third drive that Fant realized he had to remove himself from the game and make his health the top priority.

“(O)n the third drive we went three-and-out because we started to throw the ball more. I just thought that I could throw it because it was my left shoulder that got hurt and I’m a righty,” he said. “As time went on, my arm would be in excruciating pain, so I put my pride aside and I pulled myself from the game.”

Fant met with the team training staff. He took off his pads, revealing a hideous protuberance on his left shoulder. That was his clavicle bone popping out. Fant’s heart dropped. He thought about the final four games that he would be forced to miss. In 2020, Fant was a first-year varsity starter at QB, but due to the pandemic Episcopal played only three games. One year later Fant was now staring down at the real possibility of missing the remainder of his senior year due to an injury to his non-throwing shoulder.

“It’s a Grade 3 AC joint separation, which basically means I tore all the ligaments in between my AC joint and my clavicle bone. It’s good enough where I don’t have to get surgery, but it’s going to take a good amount of PT (physical therapy) to try and get back for the Haverford School game (Nov. 13),” Fant said. “I’ve already started with this doctor named Mike Quintans at (Physical Therapy & Wellness) in Newtown Square and he’s really good at what he does. He’s already got me on the right track. After nine days I already had my full range of motion back, I don’t need the sling anymore, and I feel I am on the right track to get back for Haverford.”

One day after recording his interview with the Daily Times, Fant received good news. His orthopedist cleared him Monday morning to resume a throwing program, “and I’m working my back to practice right now,” he said.

Over the past two weeks, Fant has acted as a mentor for sophomore Narome Rayborn, who has filled in admirably for Fants. On the night Fant suffered the injury, Rayborn rallied Episcopal to a 29-28 win over GA. Rayborn threw a 16-yard TD pass to Bryce Cooper to get the Churchmen within a point, then connected with TJ Cadden in the end zone for the winning two-point conversion. In last Saturday’s 26-20 win at Penn Charter, Rayborn engineered another comeback, throwing the game-winning TD pass to Cadden in the fourth quarter. Episcopal is 5-2 overall and 2-0 in the league, with an away game against Springside Chestnut Hill Academy on tap Saturday.

Fant realizes that his injury has given him a new perspective on life. The time away from playing has allowed him to strengthen his other personal character traits and fully grasp what it takes to lead off the field. He remains in contact with several colleges about playing football at the next level, while proving he has intangibles that make a great leader.

“Obviously it’s not easy to stay positive after you’ve had a potentially season-ending injury, but I realize that my role on the team kind of changed. I’m a senior captain and I have a really big leadership role on the team,” Fant said. “If I want our team to be successful and win the championship, I can’t just sit back and not really be involved anymore. So, I’ve been helpful during practice, I’ve been Narome’s go-to guy for advice. I had the headset on the sideline during games. So I’m right there, listening to the playcalls and just helping out any way I can. I tell Narome what I see, I tell Coach (Todd) Fairlie what I see, and I think the only way my role has changed is that I’m not on the field.”