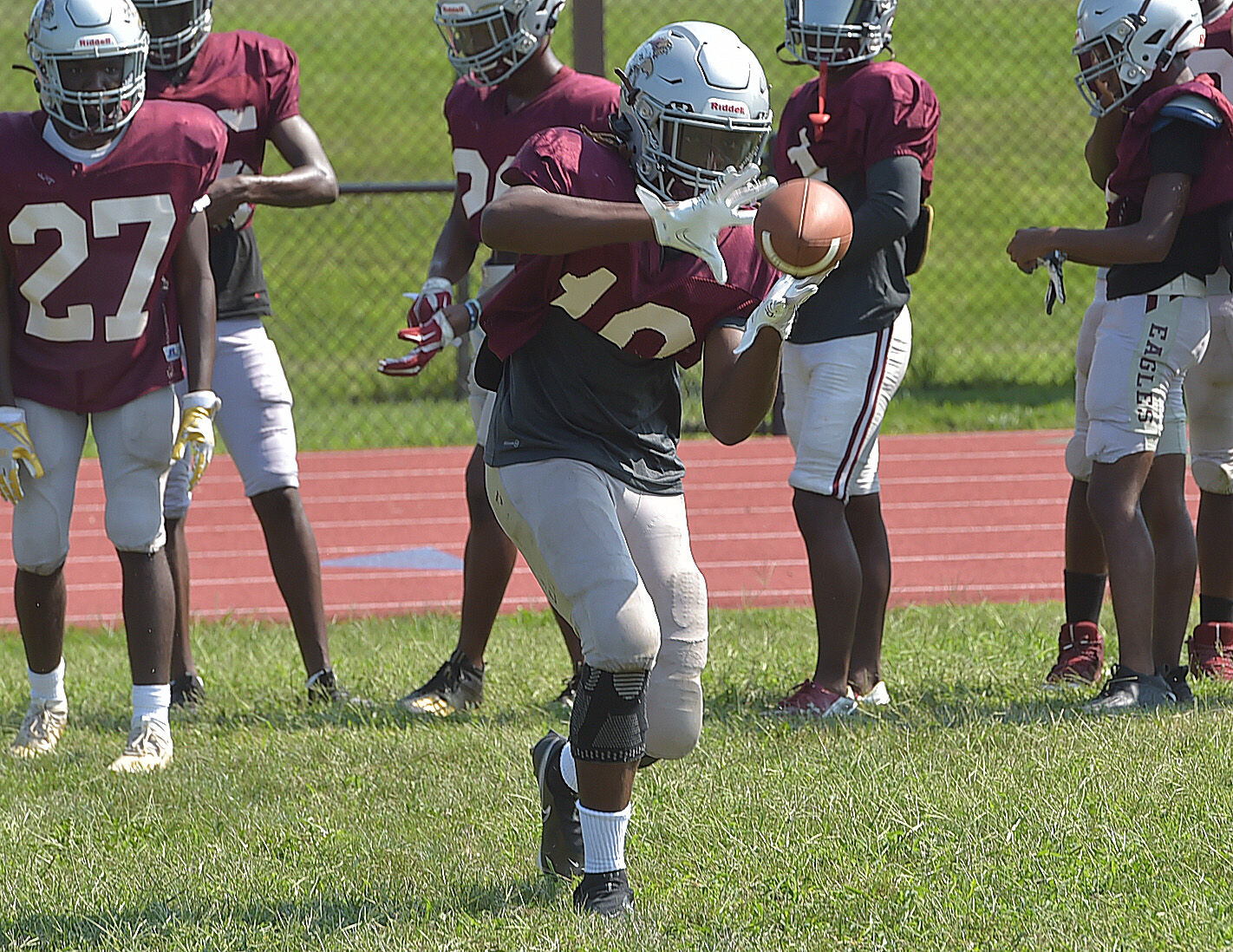 Walter Jones has been a big part of a Chichester's defense, which has allowed only 14 points during the team's current four-game winning streak. (Pete Bannan/MediaNews Group)

Nobody saw Chichester coming this year.

The only team which hadn’t earned at least a share of the Del Val League title since the turn of the century, the Eagles were hoping to challenge for league bragging rights in 2021, but many figured they would be the third-best team behind favorites Academy Park and Chester. Instead, the Eagles ran the table, going 3-0.

The fourth league game, which was supposed to be at Academy Park, will not take place. After the contest was postponed last month, the schools were unable to agree on a make-up date and location. That’s a crying shame for both teams.

Today, Chi can pump its collective chest and declare itself the Del Val champions. If Academy Park can beat Chester Saturday, the Knights and Eagles will be co-champions. That just doesn’t seem right. If ever a season AP and Chi deserved to battle it out, it’s this year. It would be a fantastic game between two very good teams.

Chi has turned its fortunes around under first-year head coach Ed Buck, who was hired weeks after the conclusion of the pandemic-shortened spring season, replacing Bob Brice, who left after two seasons at the helm. Buck, a first-time varsity boss, has Chi in a great spot going into the final weekend of the regular season. Winners of four in a row, the Eagles have allowed only 14 points over that span and have notched back-to-back shutout wins over Penn Wood and Chester.

While the Eagles, who haven’t posted a winning season since 2005, are the No. 1 seed in the District 1 Class 4A playoff rankings, they are not a lock to make the tournament. They take on 4A compatriot Bishop Shanahan (6-3) Friday night in a game that should determine the top seed, according to District 1 points tabulator Kyle Berger. In essence, six teams are fighting for four spots in the 4A tourney.

Win or lose, playoffs or no playoffs, it’s been a successful year in Upper Chichester. Junior athlete Staring Reaves mentioned following last Saturday’s 14-0 upset over Chester that everyone on the team bought in to the process.

“Ever since Coach Buck got hired, he’s been telling us that we’re going to change the program,” Reaves said. “So that’s what we are doing right now. We changed the program, we won the Del Val and we want to make district playoffs.”

For years the Delaware County wins leader, Clancy has 327 victories on his résumé. Clancy had previously won a record 94 consecutive District 1 games at Strath Haven. Prior to coaching the Panthers, Clancy was the head coach of Archbishop Carroll.

“Congratulations to my dad who became the winningest coach in District 1 and the Philadelphia area last night,” Kevin Clancy Jr wrote on Twitter over the weekend. Clancy Jr. is the offensive coordinator at Springfield (Montco).

Clancy the elder’s coaching brethren offered their best wishes to the old ball coach, including legendary West Chester University coach Bill Zwaan, who tweeted: “One of the great coaches in High School Football and the finest person ever involved in the coaching profession!!”

Clancy looks to build on his illustrious won-loss record this week when his 8-1 Panthers play Radnor at Conestoga High School. Haven is No. 2 in the District 1 Class 5A power rankings.

Kamara was electrifying in leading the Bucs to a 42-14 rout of Avon Grove last Friday. He ran for 237 yards and three touchdowns, but that’s not all. Kamara also had a 44-yard touchdown reception and returned an interception 60 yards to the end zone.

Kamara’s 237-yard rushing performance was the second greatest single-game output in school history. He trails only Larry Cox, who ran for 260 yards against Ridley Park in 1960. It’s because of Kamara that the Bucs (2-7) remain alive for a District 1 Class 5A tournament berth. With Penn Wood coming to town Saturday afternoon, the Bucs occupy the 16th and final spot in the district standings.

Instead of scoreboard watching Friday night, hoping for other teams to win or lose, the Fords will be active. According to Berger’s tabulations, Haverford (4-5) can clinch the No. 16 seed with a victory over Palumbo (4-2).

Last week it was reported that junior wide receiver Ethan Mahan had broken Haverford’s single-season record for most touchdowns in a season with 10. After further research it appears Mahan is three shy of the milestone. In 2005, All-Delco Tom Durkin registered 12 touchdown receptions, according to Daily Times records.

Jimmy Cage has been a consistent performer for Penncrest.

Quietly one of the top receivers in Delco, Cage may not get the recognition because he plays for the Lions (1-9), who have struggled to find success during his four years. Cage saw reps at quarterback his freshman, sophomore and junior years before transitioning to wide receiver on a full-time basis this year. It’s believed he is the only player in Penncrest history to have a 100-yard passing game, a 100-yard rushing game, a 100-yard receiving game, and a 100-yard return game in his career. In Delco history, Cage is in rare company. We can recall that Trey Blair, the 2018 Daily Times Player of the Year, accomplished the rare 4×100 feat during his career at Haverford, but few others, if any, have done so.

This season Cage has produced 24 receptions for 478 yards and four TDs for the Lions, who end the regular season at home Friday against Springfield.