Upper Merion gets going in second half, upends Upper Perkiomen 28-13 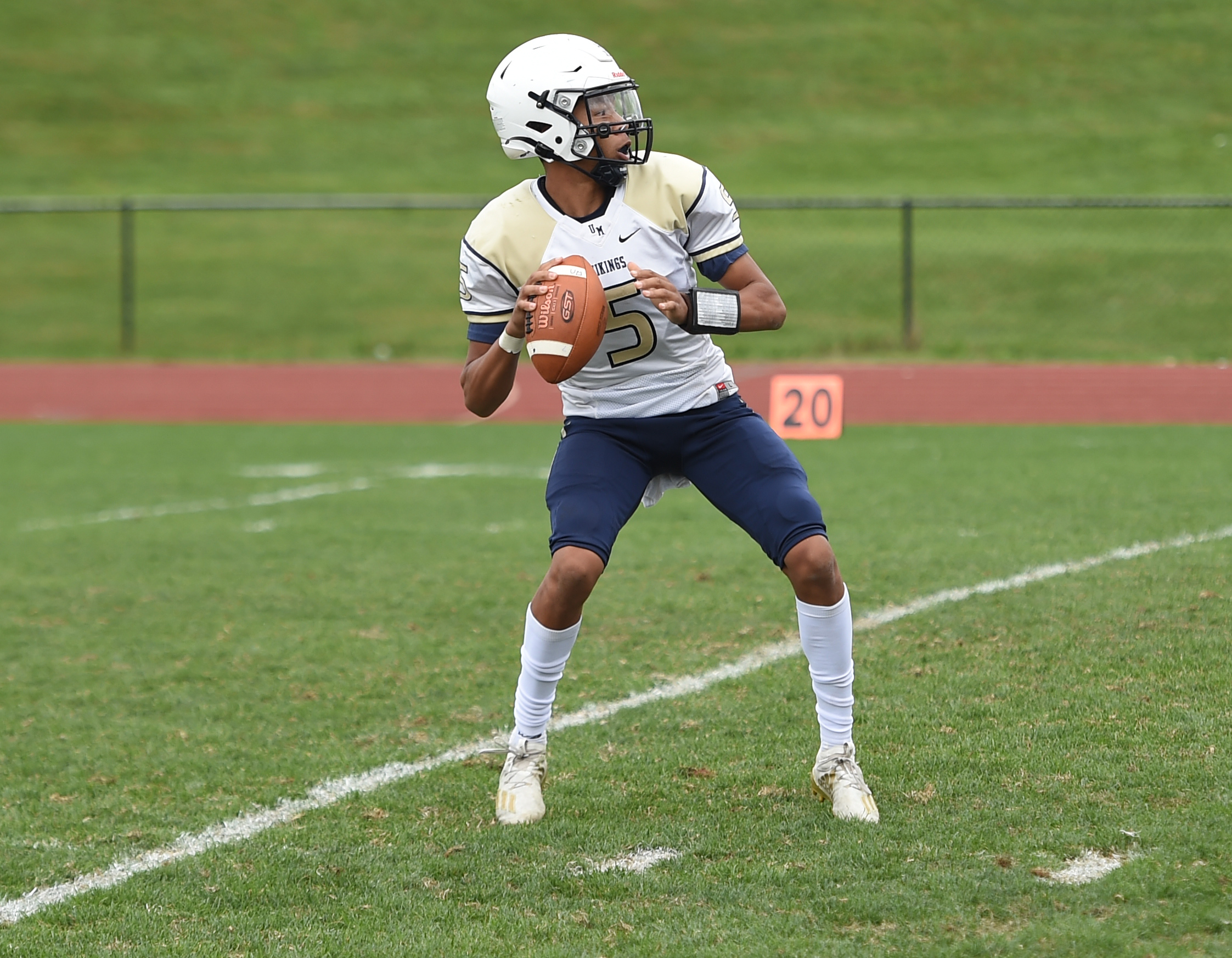 RED HILL — Upper Merion got its offense rolling in the second half on Friday night and pulled away from Upper Perkiomen for a 28-13 win at Bill Keeny Stadium.

Alzere Thomas caught a 53-yard touchdown pass from Zayd Etheridge to give the Vikings a 14-7 lead late in the third quarter and Brayden Marino added four- and 50-yard touchdown runs in the final quarter for the Vikings (2-3, 4-4) in the Pioneer Athletic Conference Frontier Division contest. Gorge Navarrete threw for 151 yards for the Indians (1-4, 2-7).

Upper Merion scored only once in the first half, on a 5-yard TD run 32 seconds into the second quarter by Marino (12 carries for 117 yards and 3 TDs) that completed a 35-yard drive.

“I really believe it just came down to execution in the first half,” said Viking coach Davis Chubb, whose team held just a 7-0 advantage at the intermission after out-gaining the Indians 184 yards to 54. “We had to get our minds right. And then it took off. It was contagious. It was good to see our return to form in the second half.”

Upper Perk tied the score midway through the third quarter on a 7-play, 56-yard drive, with Brady Thompson catching a quick pass over the middle from Navarrete (17-for-30) and breaking away from several defenders and into the end zone to complete a 17-yard TD play.

But the Vikings quickly went back on top when Etheridge (15 for 24 for 239 yards) hit Thomas in the open and the junior wide receiver sped through the defense to put the visitors up for good.

“Pretty much get him the ball in space and let him go to work,” said Chubb. “All the performers we have, so many skill guys. We can spread the ball out.”

The Indians responded with a 10-play, 63-yard drive that included a quick hitter by Dylan Hank, who dragged a pile of defenders for a 21-yard gain, and a 1-yard sneak by Navarrete with 9:48 remaining in the contest.

“All year,we’ve been preaching team effort,” said Chubb, whose team gained 215 yards in the second half for a total of 399.

For Upper Perk, Hank ran for 44 yards on seven carries, Thompson caught four passes for 45 yards and Logan Simmon ran for 30 yards and had six receptions for 41 yards.

The Indian defense racked up four sacks and an interception by Nevan Smith.

“We were trying all different types of packages, with Brady (Thompson) and Dylan (Hank), trying to get our best players in there at the same time,” said Upper Perk coach Tom Hontz. “We were looking for whatever we could find. Brady’s slant was nice and Dylan had some quick pops. But we shot ourselves in the foot. You can’t start 1st-and-20. You can’t make those kinds of mistakes.”

The Indians will finish their season with a crossover game at a Liberty Division opponent next week.

“I’m really proud of the effort tonight,” Hontz added. “That’s all you can ask for. Week 9 and we haven’t had the season we wanted, but we’re proud of this group. They keep plugging. We’ll try to get a win to end the season. It would be awesome.”