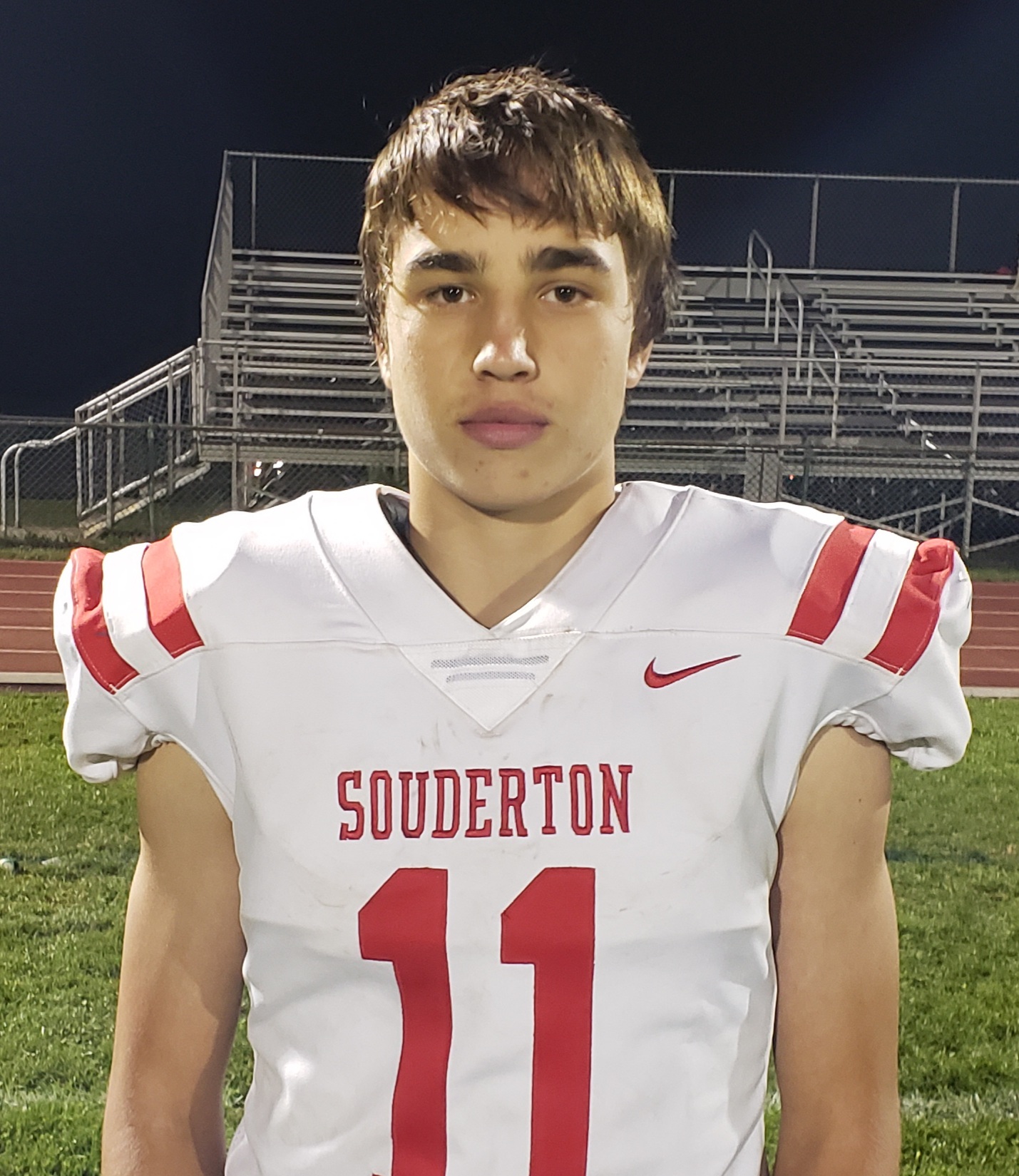 CHELTENHAM >> Jared Zimmerman made his first varsity start Friday night against Cheltenham and only needed to play a half. The junior signal-caller led Big Red’s offense to six touchdowns on seven possessions before resting the entire second half of a 42-27 nonleague win at Cheltenham High School.

“I was a little nervous coming into the game,” Zimmerman said. “Then we started to slow it down a little, got our act together. We were running the right plays and everything.”

“I was very impressed for his first varsity start,” Big Red coach Ed Gallagher said. “I know he was a little bit nervous… but he played with poise and he made plays. I know the kid’s a really good athlete and he’s been a good quarterback his whole life. It was his first varsity start and he really made the most of it.”

His first completion of the game went for a 37-yard score. On the second play of the second quarter, Zimmerman rolled left after a playaction fake and found Aidan Scott all alone inside the 15-yard line. Scott made the catch and ran the rest of the way for the touchdown to give Big Red (5-4) a 14-0 lead.

Later in the second quarter he made Cheltenham pay for a fumble in their own territory. On the first play after the turnover, he hit Elijah Goods in the front corner of the end zone from 26 yards out for a 28-0 advantage.

Zimmerman added both of his rushing touchdowns in the final minute of the first half.

His first score came after he nearly fumbled the ball. He lost control, gained it back and went up the middle for 19 yards to put Souderton ahead, 35-7.

“I hit our running back and it just popped up,” Zimmerman, who also golfs and plays basketball, said. “I was like, ‘Oh no!’ Then I just got the ball and started running.”

After Cheltenham fumbled the kickoff and Big Red recovered, Zimmerman targeted Goods down the field and earned a defensive pass interference penalty. After a few runs set up 1st-and-goal at the six with eight seconds left, Zimmerman rolled right before cutting up field and getting in for a 42-7 lead.

“We sprinted him out,” Gallagher said. “We had an out-route with our wide receiver and then I told Elijah Goods to run a little option route inside to get into the end zone. I said, ‘Jared these are your two options. If it’s not there run the ball.’ He went to one read and then ran. A good decision — he got into the end zone. He’s an athlete making plays. I’m happy for the kid.”

Zimmerman’s only hiccup came on the opening possession of the game. Souderton faced a 2nd-and-goal at the three-yard line on the 10th play of the drive. There was a miscommunication between Zimmerman and Chris Kerns, which resulted in a lost fumble in the end zone.

“(My teammates) just told me to keep my head in the game,” Zimmerman said after taking the blame for the fumble. “That’s what I did for the rest of the game.”

Kamden Wyatt was a bright spot for the Panthers (4-5).

The 5-foot-11 senior setup Cheltenham’s first touchdown of the game by returning a kickoff to Souderton’s 35-yard line. He converted a first down on 3rd-and-6 before scoring a touchdown on 4th-and-4 at the five-yard line.

On the third play of the second half, quarterback TJ Taylor hit Wyatt in stride deep over the middle for a 68-yard touchdown.

In the fourth quarter, Wyatt took a direct snap on 3rd-and-12 and raced 67 yards for his third score of the night.

Wyatt, who was honored before the game along with Cheltenham’s other seniors for Senior Night, finished with 152 yards of offense – 76 rushing and 76 receiving – and three touchdowns.