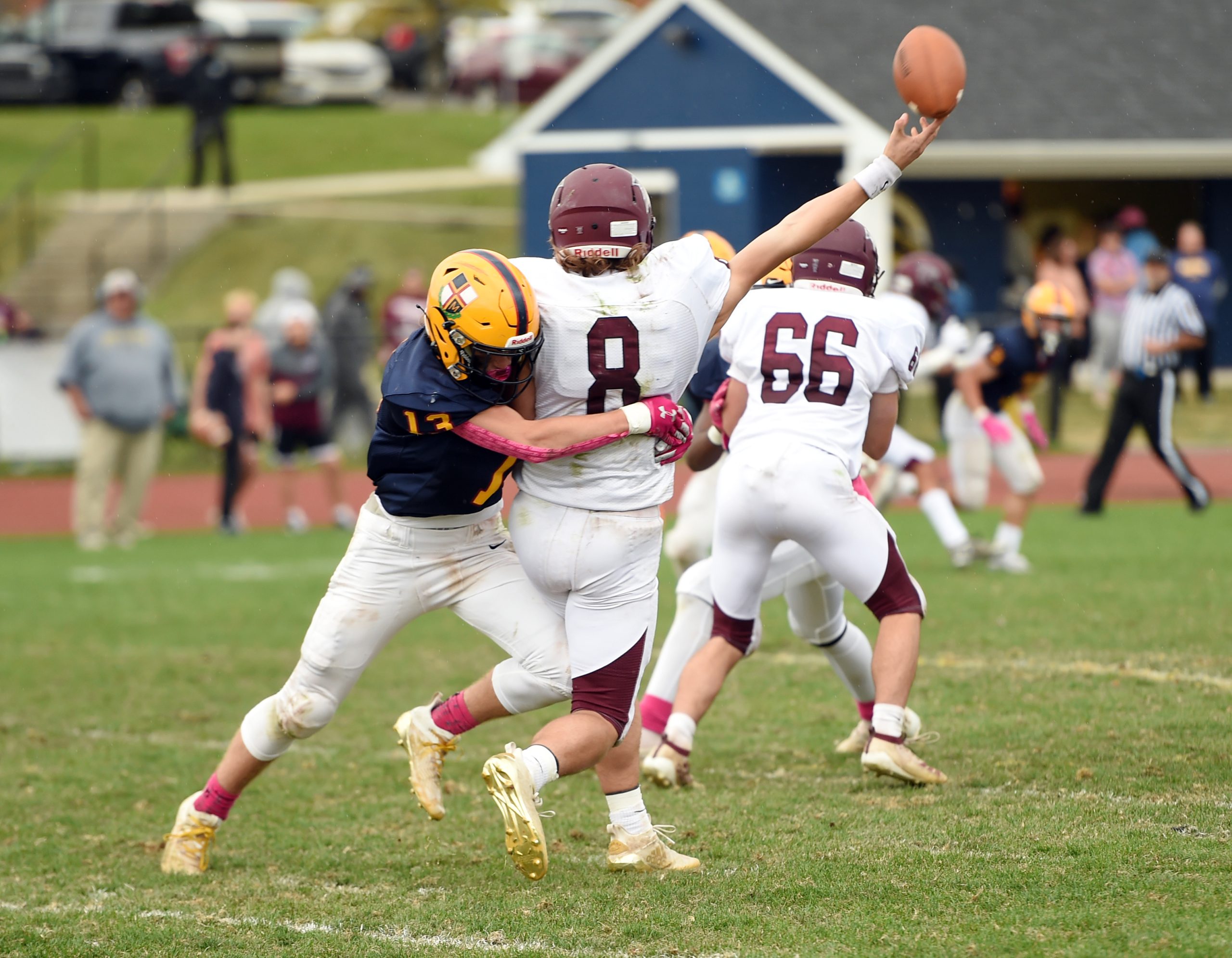 UPPER PROVIDENCE >> Part of the core of Pope John Paul II’s last Frontier Division title team was in attendance for the Golden Panthers’ Homecoming game with Pottsgrove on Saturday afternoon.

The group — which won the school’s first division title in 2019 — saw the current PJP squad follow in their footsteps with a dominating 42-6 win to win the Frontier and earn a spot in next week’s Pioneer Athletic Conference championship.

Saturday’s victory booked the Golden Panthers a matchup with Liberty Division winner Perkiomen Valley at PV next Friday, which will be PJP’s second title game appearance.

With another division title in hand, the Golden Panthers focus on Saturday afternoon swiftly switched to one-upping their predecessors.

“We’re really excited,” senior running back and linebacker Josh Little said. “We’ve been working for this the past four years since we were freshmen. Our school has never won the PAC championship, so we’re looking to be the first to win it.”

Senior quarterback D.J. Clarke completed 12-of-18 passes for 234 yards and three touchdowns, all three coming in the first half to spot the Golden Panthers (7-2, 5-0 Frontier) a 28-0 halftime lead.

Little was a dual-threat, running 14 times for 89 yards and a pair of scores as well as catching four passes for 41 yards and a touchdown. He broke the school’s career record for rushing yards.

Junior wideout and defensive back Derek Skarbek also had a big game, catching two passes for 116 yards and a touchdown — a 77-yarder from Clarke on PJP’s first offensive possession. He also had an interception.

The Golden Panthers defense put together a dominant effort, holding the Falcons (6-2, 4-1 Frontier) scoreless until a 66-yard touchdown pass from Pottsgrove quarterback Ryan Sisko to Tyler Kaufman late in the fourth.

“It felt great,” PJP senior offensive and defensive lineman Jacob Dobrowolski said. “There was a lot coming into the game of just excitement. We came out and executed.”

In the secondary, Joe Pickell, Derek Skarbek and Brent Mitala all picked off Sisko, who came into the game with just one interception on the season. Mitala took his interception to the house to cap PJP’s scoring in the fourth.

Lake recovered a fumble to make it four takeaways for the Golden Panthers’ defense in the game.

“Mostly stopping the run, make them pass the ball because we know their receivers aren’t as good as our defenders,” senior linebacker Steele Depetrillo said of PJP’s defensive game plan. “As long as we made them pass, we knew we’d be successful, and that’s what we did.”

PJP’s offense started with a bang when Clarke connected with Skarbek for the long touchdown pass on the Golden Panthers’ first offensive drive.

The Golden Panthers went three-and-out on their second drive of the game before scoring touchdowns on their next three drives to end the first half.

PJP’s only other offensive blemish was a red zone pick by Pottsgrove’s Gabe Rinda on the Golden Panthers’ first drive of the second half.

Clarke tossed to Depetrillo for a 10-yard score on PJP’s third drive, then Little ran from 35 yards out before he caught a 13-yard pass from Clarke to end the first half.

“We just tried to go wherever they weren’t,” Clarke said. “If they load the box, we spread it out. If they spread it out, we run the ball.”

PJP had a 230-74 advantage in total yards by halftime. The Golden Panthers out gained the Falcons 388-176 in the game, and converted 16 first downs compared to seven for Pottsgrove.

“We missed a couple assignments and they made some big plays on us,” Pottsgrove coach Bill Hawthorne said. “That takes us out of our game plan a little bit, but the fact of the matter is PJP came out and they were by far and away the better team today.”

DJ Clarke fakes the handoff to Steele Depetrillo then finds him open in end zone. 14-0 PJP with 10:41 left in Q2 pic.twitter.com/3b6of6uFFh

A contingent of Perkiomen Valley players attended Saturday’s game, watching from along the fence behind one of the end zones.

Little gave a point toward the Vikings as he scored on his touchdown catch late in the first half.

“I saw the team watching us, just letting them know we’re coming next Friday,” Little said.

The Golden Panthers picked up a 34-22 victory over the Vikings last year, but Little and his teammates know that won’t mean anything at all when they face a Perkiomen Valley team looking for its first league title in three years on Friday night.

“We’re focused on what we need to do this Friday,” Little said.. “We know we beat them last year, but that’s all in the past, so we’ve gotta focus on the future.”

Pottsgrove will play at Liberty Division runner-up Spring-Ford next Friday in PAC crossover action after finishing as the Frontier runner-up for the second time in three seasons.

“We’re going to go back an reevaluate a lot of things,” Hawthorne said. “We’ll go back to the ol’ drawing board and go from there.”