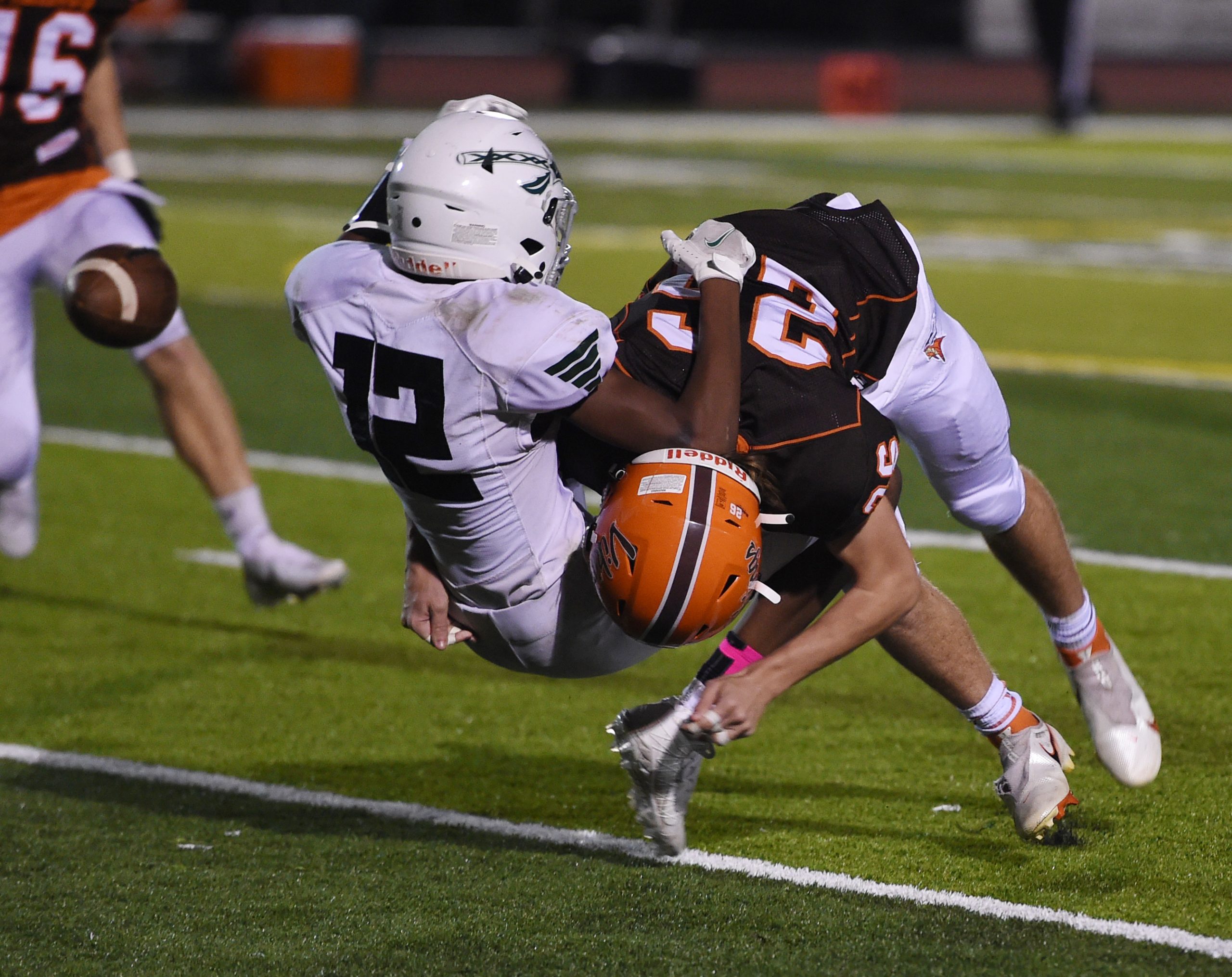 And it couldn’t come at a better time.

A week after pitching its first shutout of the season against Boyertown, the Vikings’ defense blanked Methacton for a 41-0 victory in the Battle Ax rivalry game Friday to finish off an unbeaten Pioneer Athletic Conference Liberty Division run.

Perk Valley will bring a streak of 10 scoreless quarters into next week’s league title game, last allowing points on a second-quarter touchdown by Owen J. Roberts in a 49-7 win Oct. 8.

“It’s just a momentum swinger for us going into next week,” defensive back Jeremy Brewer said of a second straight shutout. “It’s pretty nice that the defense played as well as it did today.”

The Vikings recovered a pair of fumbles, Jake Beaudoin picked off a pass and Carson Pascoe tallied a sack, but the highlight of the night for PV’s defense was Brewer’s interception returned 65 yards for a touchdown.

“I was ecstatic,” said Brewer, who had a pick six come up one yard short earlier this season. “It was really fun. It was a really cool experience.” Ryan Klimek (11 carries, 62 yards) added a short third-quarter score, and Rasheem Grayson ran in a 12-yard touchdown in the fourth to complete the game’s scoring.

Kohler completed 14-of-21 passes for 164 yards in addition to one rushing scoring, and Dawson Debebe caught three passes for 53 yards, including a 33-yard reception, to lead the PV offense.

“They’re the backbone,” he added on the PV offensive line.

Typically one of the lead blockers for Klimek and the rest of the Vikings’ rushing attack on their way into the end zone, Beck was excited to find pay dirt himself for just the second and third times this season.

“It was a really great experience,” Beck said. “I’ve been itching to get into the end zone the past few weeks and it finally worked out.” QB Dan Brandi completed 10-of-26 passes for 136 yards for Methacton. Jake Chapman hauled in four of those passes for 55 yards to lead a Warriors offense that rarely saw the other side of midfield.

The four turnovers proved costly for the Warriors as PV scored touchdowns off three of them.

“They set us up so many times tonight,” Beck said of his team’s defensive takeaways. “They do that every week. We’re really grateful for what they do.”

The Vikings now shift their focus to next Friday’s PAC championship game where they face the winner of Saturday’s Pottsgrove-Pope John Paul II game.

It will be the first title game appearance for PV since 2018. Kohler, a freshman on the 2018 PAC championship squad, is the only holdover from PV’s last title team.

“We’re so excited,” Brewer said. “It’s been three years. Our seniors have never won a championship. It’s a great opportunity for us to go out and show our skills, and hopefully bring a championship back to PV.”

“Like Jeremy said, we haven’t had this experience in the three years we’ve been playing here,” Beck added. “It should be awesome to get an opportunity. We’re going to come in ready to play.”