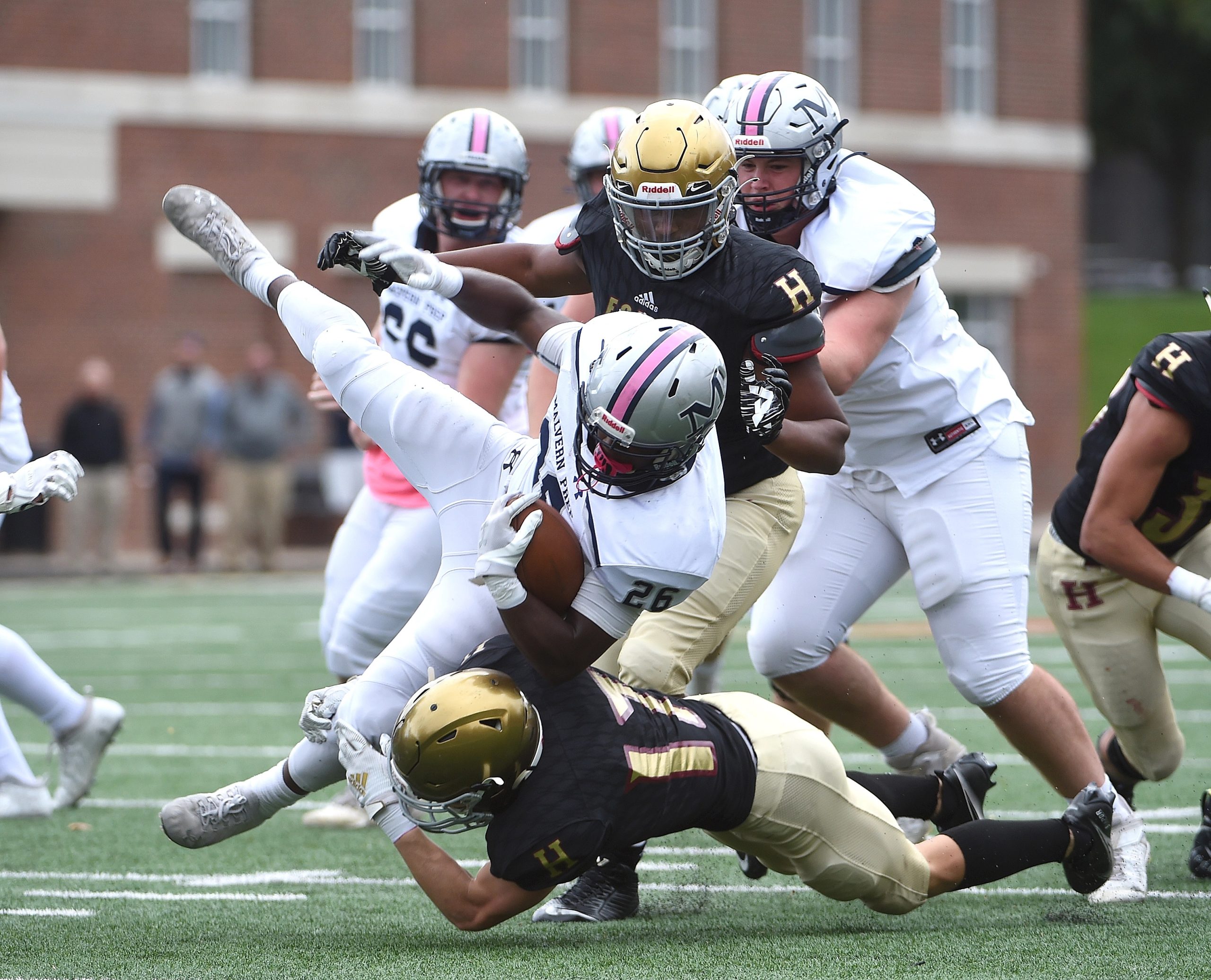 HAVERFORD — Isaiah Wright’s day appeared to be done when he went down with an ankle injury with less than five minutes to go in the first half of Malvern Prep’s 24-13 Inter-Ac League victory over the Haverford School Friday afternoon.

The 5-8, 185-pound senior running back/free safety was slow to get up and limped off the field in obvious pain.

For an offense that struggled to move the ball efficiently in the first half against the Fords with Wright in the lineup, losing him would have been a devastating blow. As it turned out, though, the injury wasn’t as severe as it initially appeared.

“I just rolled my ankle under the pile,” Wright said. “I knew it was a little minor injury that I could shake off. I definitely felt I could come back in the second half.”

Wright did return and was instrumental as the Friars (5-2 overall, 2-0 Inter-Ac) turned to the running game to thwart a comeback bid by the Fords. Wright finished with 164 yards and one touchdown on 25 carries, but he did most of his damage in the fourth quarter after the Fords (3-3, 1-1) took advantage of an interception by defensive end Isaiah Boyd to get on the board. Five plays later, on fourth-and-five from the Malvern 26-yard line, Sam Gerber hauled in a TD pass from quarterback Michael Benincasa to cut Malvern’s lead to 17-7 with 58 seconds to go in the third quarter.

At that point, Malvern Prep coach Dave Gueriera did not take any chances. He put the ball, and the game, in Wright’s hands and Wright delivered.

“Hats off to Haverford School for playing us tough all game,” Gueriera said. “Defensively, I thought we did a good job keeping them in check. We just had to get our offense going.”

The Friars needed a blocked punt by D’Angelo Stocker and an interception by Andrew Connolly to set up its first two scores, a 32-yard Jake Reid field goal and a one-yard plunge by quarterback Jack Capaldi. The only real sustained drive came at the end of the first half when Capaldi found Stocker for an 18-yard touchdown.

It wasn’t until the final two possessions that the Friars moved the ball effectively, and much of that work was done by Wright. Capaldi threw one pass on Malvern’s last two drives, and that came on the first play of the next-to-last possession. The rest was all Wright. Running behind a mammoth offensive line, he carried the ball 17 times for 108 yards and a touchdown.

“All the credit goes to them,” Wright said of his line. “They put in the work and give me the holes to run through. They do a great job.”

After the Fords got within 10, Wright carried the ball seven straight times and capped an eight-play, 67-yard march with a two-yard TD run to push the lead to 24-7 with 8:58 to play.

“Isaiah Wright is a good running back,” Haverford School defensive tackle Bill Brosko said. “And with their line, with Coltin (Deery) in the middle, they’re tough. It was a hard fight. They got up on us in the first half and it was hard to come back from.”

The Fords did come back, though, on the next possession. Benincasa found Derrick Knox for 74 yards and then hit Matthew Brosko with a 21-yard scoring pass to cut the deficit to 24-13 with 7:14 to play in the game.

It was as close as the Fords would get, even though a fumble by Stocker on the ensuing kickoff meant the Friars had to start at their 5-yard line. That wasn’t a problem. Behind Wright, and two Haverford School penalties, the Friars drove to the Haverford School 29 before the Fords’ defense stiffened and forced a punt.

By that time, though, there were just 58.2 seconds left on the clock.

“That last drive was a championship drive,” Gueriera said. “To start at the 5-yard line and take it all the way down to the opposing 30, that’s what championship teams do. They find a way and we found a way.”