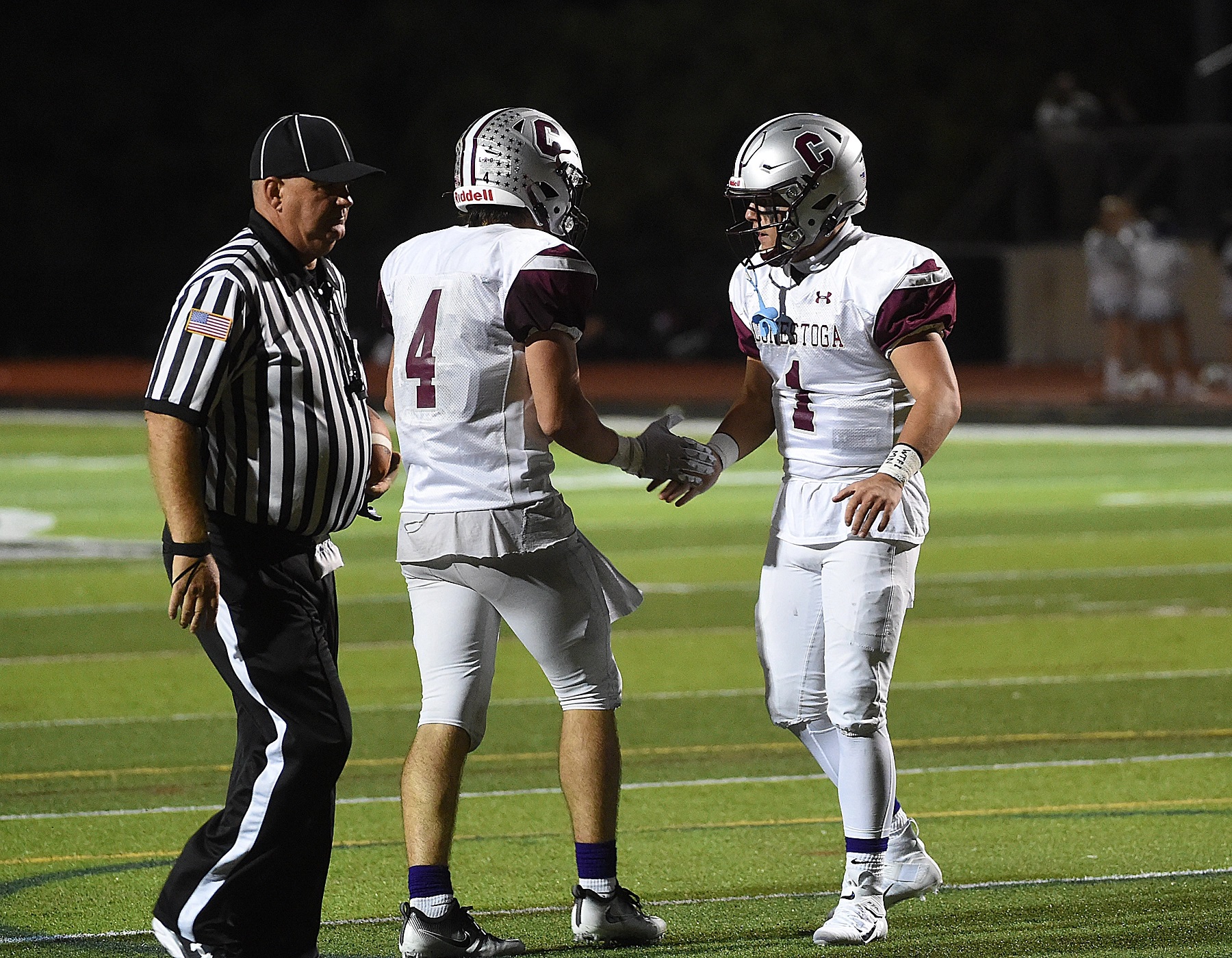 Conestoga's Peter Detwiler, left, is congratulated by quarterback Calvin Shirly after the two hooked up on the second of three touchdowns in Friday's 36-14 win over Marple Newtown. (PETE BANNAN - DAILY TIMES)

NEWTOWN SQUARE — Peter Detwiler has been catching passes from Calvin Shirley for somewhere around a decade. The bond that receiver and quarterback have forged, through myriad practice sessions and in games that might not have gone Conestoga’s way, has blossomed as seniors.

But Friday night at Marple Newtown, it wasn’t just how – or how often, or for how many yards – Detwiler and Shirley hooked up. It was when they made the connection that showed how special their pairing has become.

Shirley found Detwiler for three touchdowns Friday, for 17, 19 and 20 yards, to lead Conestoga to a 34-16 win over Marple Newtown in a cross-class clash of playoff teams. The fact that the win sealed the first playoff berth in seven years for Conestoga (7-2, 6-2 Central League) makes it all the more massive.

“On different calls, me and Cal are on the same page the whole game,” Detwiler said. “Sometimes he doesn’t even have to call the audible; I know he’s going to say it. It’s that kind of relationship that we’ve built. We’ve been playing together our whole life, and it’s awesome.”

All three TDs were spectacular. First was a jump ball to Detwiler in the corner of the end zone with 32 seconds left in the first half to put Conestoga up for good at 14-10.

Then came a sideline route on fourth-and-1 at the 20 early that Detwiler wrestled away from a cornerback that was originally called incomplete, but overruled when the refs conferred. Detwiler appeared to take the ball to the ground, only to have it pop out as he got up to celebrate.

“It’s awesome placement,” Detwiler said. “Two of the best balls I’ve ever caught in my life.”

Then came a fourth-and-six strike, with the game likely out of reach, when Detwiler broke off his route and ran back toward an under-pressure Shirley, caught a jump pass, twirled out of a tackle and dove over the pylon to extinguish all hope of a Marple Newtown comeback with 2:10 left.

Controversy!!
Peter Detwiler goes up and gets it on fourth down. Refs rule incomplete then change it to TD. pic.twitter.com/U7u61e1jp7

Fourth downs decided this contest. Conestoga, which entered as the 10th seed in District 1 Class 6A, went 5-for-5 on conversions. That included Shirley finding Detwiler for 12 yards on fourth-and-1 to set up Jon Quici’s first of two running scores in the second quarter. That drive was prolonged by Peter Costigan taking a fake punt five yards on fourth-and-four at midfield.

“It’s definitely tough,” Marple Newtown running back/defensive back Charlie Box said of not getting stops. “We just have to have a short memory about that and get back to work.”

A fourth down also stopped the Tigers (6-3, 5-3) in their tracks. They answered Quici’s first score within four plays, Box rushing 54 yards, then finishing off a five-yard TD to make it 10-7. They looked primed to reply to Detwiler’s late touchdown in the second thanks to a 32-yard connection between David Bertoline and Box to get the ball down to the 3 with three seconds left in the first half.

Drew Merschel hits and drops Box for a loss on 4th and 3. Stoga takes over on downs. Big BIG stop pic.twitter.com/AukDTSTOPH

But Ty Can, who hit a 22-yard field goal in the first quarter, pulling a 20-yarder wide at the horn, sending Conestoga into half up 14-10.

The Tigers got the ball out of the break, but Box was thrown for a loss on fourth-and-two at the Conestoga 44, interior lineman Drew Merschel stacking him up in the backfield.

“My guy pulled, I swam the center as he tried to get down, and I just made the tackle,” Merschel said. “… If they had scored, they would’ve been back in the game. I feel like when we did that, that changed things.”

Instead of going in to take the lead, Marple next touched the ball down two scores. With just one first down on their first three series of the second half, the Tigers let Conestoga open up a cushion.

Shirley finished 11-for-15 for 171 yards. He needed just Detwiler (six catches for 126 yards) and Patrick Reilly (five for 45) to get there. Starting running back Chase Kelly was banged up in the first half but returned, though he was needed only on defense since Quici ran 18 times for 96 yards, including a 23-yard score in the third.

The only letup by the Pioneers came in the fourth when a botched punt snap sailed for a 35-yard loss. Bertoline capitalized, finding Eric McKee for a 21-yard score. The left-handed sophomore shook off some struggles in the third to finish 12-for-23 with a touchdown and an interception, the latter in the final minute on a deflected ball that Bryce Beltrante snagged. Box ran 12 times for 102 yards and caught two passes for 44. McKee hauled in three for 62 yards.

The loss ends a five-game winning streak for Marple, which entered safely in the playoffs as the No. 6 seed in Class 5A with Harriton to wrap up the regular season.

Peter Detwiler goes up and gets it! 17 yard TD
Conestoga 14, Marple Newtown 10 just before half. pic.twitter.com/synsVBju0H

“I think this is good for us,” Box said. “I think we needed some humbling. I think we needed this loss to start focusing more in practice and the film room, and we’ll bounce back next week at Harriton and then it’s time for playoffs.”

Conestoga is already in that mindset. A meeting with Ridley next week could be a playoff preview. And the way Detwiler and company took care of business Friday show how well they respond to challenges.

“We kind of kept it out of our mind,” he said. “We didn’t want to look past this game. We could’ve thought, hey we could easily lose this game and win the next. No, we wanted to win this game, have that established we are making playoffs, and we came out and executed that.”