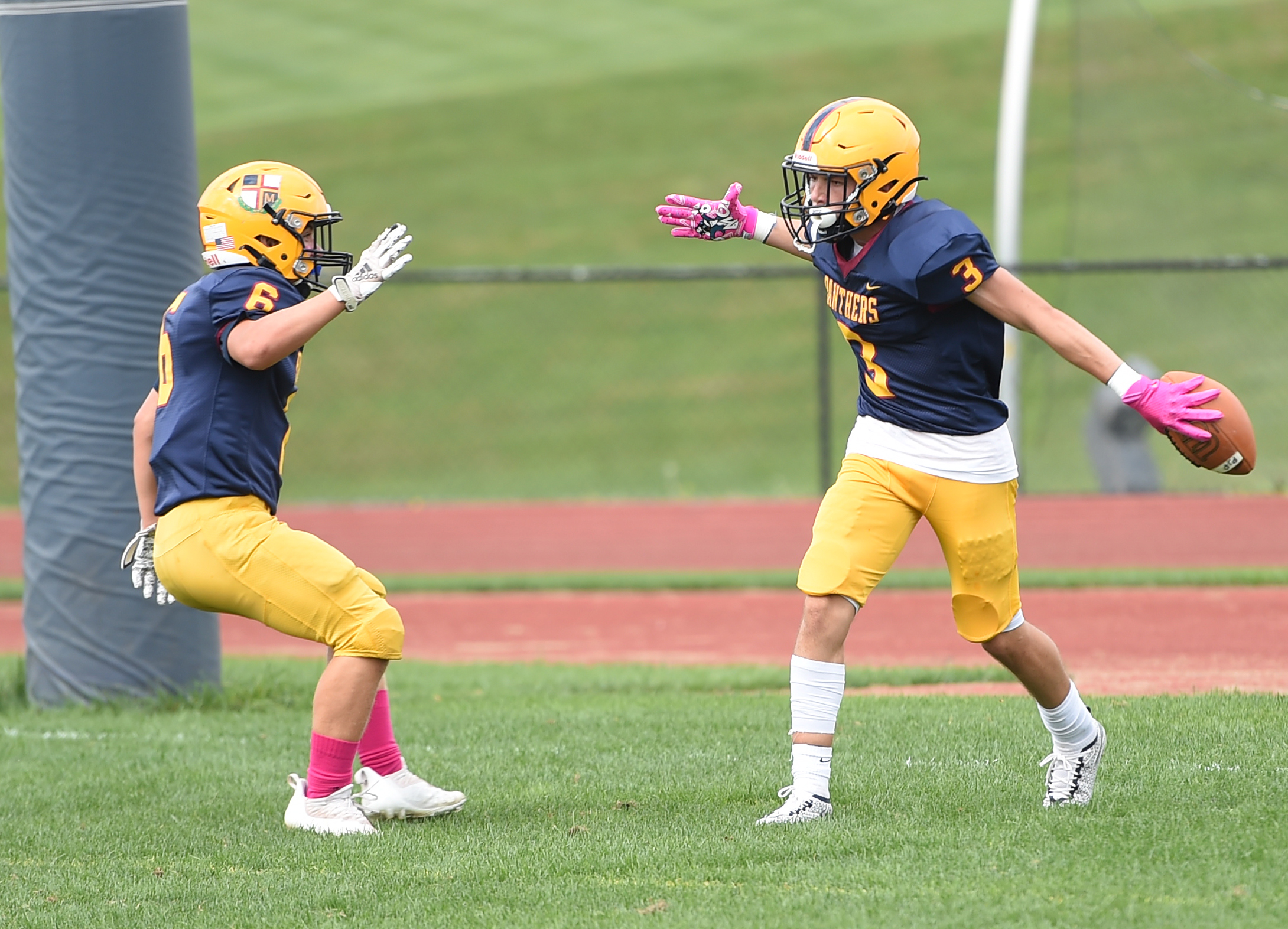 It’s been two years since Pottsgrove and Pope John Paul II battled things out on the football field.

With the implications that come with Saturday’s matchup, it’s likely neither team were bothered too much they had to wait until the final week of the regular season to meet again.

After two cancelled contests a season ago and both teams navigating the first four weeks of their Frontier Division schedules unscathed, the Falcons and Golden Panthers will play Saturday (1 p.m.) for a division title and spot in the Pioneer Athletic Conference championship game.

“Our guys are pretty excited about it for sure to play against a great team like Pottsgrove,” PJP coach Rory Graver said. “They’re a really talented team; they’ve had a great season so far. It’s exciting. Not having the opportunity to play them last year or play in any kind of big meaningful games last year in terms of playoff implications and Frontier Division, our guys are just excited for it.”

The two Frontier powers finished first and second in the division in 2018 and 2019, when the Golden Panthers ended the Falcons’ run of three straight Frontier titles.

“It’s going to be a monumental task. PJP is extremely good, but this is what it’s all about,” Pottsgrove coach Bill Hawthorne said. “This is why we coach, this is why we play football. This week’s fun and the atmosphere on Saturday is going to be great.”

Pottsgrove (6-1, 4-0 Frontier) and Pope John Paul II (6-2, 4-0 Frontier) distinguished themselves from the rest of the division during each of their tests in conference play.

The Falcons didn’t allow a point in two of their Frontier games, pitching shutouts against Phoenixville (31-0) and Pottstown (35-0), while also picking up decisive wins over Upper Merion (36-20) and Upper Perkiomen (42-14) last week.

“They’re extremely, extremely well coached,” Hawthorne said of the Golden Panthers. “They have athletes. They have so many good athletes on the football field it’s amazing. On offense, they present a lot of formations with different kinds of motions with alignment and assignment that will present problems. … Looking at their defense, they’re as stout as they can be. They’re big and they’re athletic.” PJP’s D.J. Clarke has completed 101-of-128 passes for 1,230 yards and 16 touchdowns compared to four interceptions. He ranks second in the league in passing yards and touchdowns. Ryan Sisko (25-of-60, 578, 9 TDs, INT) commands the offense for the Falcons.

“Up front, they’re big and they’re strong and they’re physical on both sides of the ball and they have playmakers,” Graver said of Pottsgrove.

The Falcons’ special teams unit, now with touchdowns in four consecutive games, could be an X-factor in the game. Vinny Scarnato, Bryce Caffrey and Brunson all have return touchdowns.

“We’ve gotta be great on our coverage,” Graver said. “That’s probably the most important thing. On our kickoff coverage, we’ve gotta be great there. Our kicker has to be great in terms of putting the ball where it needs to go, and we need to get down there cover and tackle really well.”

Graver noted the emergence of Pickell and the two-way play of lineman senior captain Jacob Dobrowolski and junior Nzyir Lake as some of the highlights for the Golden Panthers as of late.

Hawthorne made sure to emphasize the importance of seniors Neeson and Shane Caffrey in guiding his group throughout the season.

Seniors like Dobrowolski, Neeson and Caffrey will be looked upon as steadying presences on the field for two teams who don’t have much big-game experience due to their shortened seasons a year ago.

Neither coach is too worried the moment will be too big.

“It’s going to be a new experience for those guys for sure,” Graver said. “But our mindset the entire year — especially after last year getting games canceled and only getting to play three games — is we’re just going to enjoy every moment, enjoy every opportunity and we’re just excited about this opportunity.”

Hawthorne reiterated that games likes Saturday are the reason those involved on both sides love the sport.

“This is what it’s all about,” Pottsgrove coach Bill Hawthorne said. “These guys while they experienced it a little bit as freshmen and sophomores, this will be a big game atmosphere for the first time that they’ll have to get acquainted to. But they’re ready. They know how to play football.” Preview: Boyertown (1-3, 3-5) is in position to put a damper on Norristown’s Homecoming celebration while getting itself back on a winning track. But head coach T.J. Miller doesn’t see that being a sure thing.

“We cannot be fooled by Norristown’s record,” he said. “Coach Milligan does a great job with his team. Norristown (0-4, 0-8) is extremely talented, and they are only a few plays away from having a couple wins under their belt. We can’t take them lightly.

“Number 7 (John DiNolfi) is a great athlete. Their linebacking corps is strong. They are big up front on both sides of the ball. We need to play a full 48 minutes. Norristown’s big play ability keeps me up at night.”

In that vein, the Bears are looking for Gavin Chamberlain and Roman Marinello to remain steady forces on defense. Offensively, Leo Egbe (685 yards, 8 TDs) has led the rushing game while Colin Eisenhard and Zach Foskey have been stabilizing forces on the Bears’ special teams.

“Our kickers have been pretty steady all year,” Miller said. “Colin Eisenhard flips the field for us as a punter, and Zach Foskey is automatic as our placekicker. Norristown is an extremely good team, Colin needs to be ready not to put the ball in the hands of their returners.”

Norristown’s offense got a boost from quarterback Chris Carter and wide receiver Julian Arthur as they scored twice in the second half of last weekend’s game with Owen J. Roberts. Carter was 6-for-11 for 55 yards and had a 26-yard scoring pass to Arthur late in the fourth quarter.

Preview: While Ethan Kohler solidifies his status as the area’s top quarterback (100-for-151, 1,670 yards, 21 TDs), players like Gage Young and Ryan Boozer  are standing out on defense, and Jake Jonassen on both sides of the ball for PV (4-0, 6-2).  Dawson Debebe (605 yards, eight TDs) is the area’s leading receiver.

All those players will be looked to as the seventh-ranked Vikings look to complete an unbeaten run through the Liberty Division ranks while maintaining their hold on the Battle Axe Trophy given to the school that wins this longtime rivalry between neighbors. PV will also be hosting its Homecoming game that night.

“Methacton is improving steadily this season,” PV head coach Rob Heist noted. “They have nice size on their offensive and defensive lines. The quarterback is a dual threat running and passing the ball with efficiency. We think their defense plays physical and that they have some playmakers who are concerning.”

The Phantoms (2-2, 3-4) look to upgrade their 11th-place standing in the district’s 5A ranks, in a bracket where 16 teams qualify for the playoffs. Their leading rusher, Owen Koch (901 yards, 9 TDs), is closing on the 1,000-yard plateau as the area’s number-two runner behind OJR’s Avrey Grimm.

“I was pleased that the team was able to come out after halftime and put together a complete half of football,” head coach Anthony Ciarlello said of last Friday’s win over UM. “The offense and defensive lines really put in a full day’s work to get ready for Upper Merion’s very impressive line.”

Its results this fall notwithstanding, the Trojans have Ciarlello’s full focus heading into today’s game.

“Pottstown’s record (0-4, 0-8) does not indicate the type of team they are,” he said. “Every game I have watched, I have seen long explosive runs, bug plays and the ability to score at any moment. We need to play above their excitement and ability to go deep fast”

Rashean Bostic, who last week stepped in as at quarterback in a time of need and did very well, was one of several Trojans head coach Jeff Delaney singled out for their contributions. Chris Thomas, Izaiyah Wilkerson and Aaron Winfield also stepped up to play key positions offensively and defensively.

“We need them to continue this week as permanent players on both sides of the ball,” Delaney said. “We need to stick together and continue to battle hard each game and strive to improve and stay together as a group.”

Preview: Upper Perkiomen (1-3, 2-6) continues to rely on Brady Thompson’s rushing skills (512 yards on 86 carries) and the defensive efforts of  Nevan Smith, whose three interceptions list him among the area’s leaders.

Upper Merion (1-3, 3-4) is on the cusp of District 1’s 5A rankings, standing 15th with 16 teams qualifying for the playoffs. The Vikes need to regroup and rebound from their successive losses to Pottsgrove, Pope John Paul II and Phoenixville with key play from quarterback Zayd Etheridge (57-for-104, 840 yards) and Brayden Marino, who gave the team a solid rushing effort.

“We need to play a full four quarters this week to be successful,” head coach Davis Chubb said. “I’m looking for a big defensive bounceback this week.”

“I was most pleased with our young men playing with a lot of emotion, as opposed to playing emotional,” head coach Rob Flowers said. “Friday was a big game for our program, as we won game 5 and that was my former school. Our young men rose to the challenge and played a complete game.”

Ayden Martin is GM’s leading receiver, with three catches for 93 yards and four TDs. Delsin McNeil (6-for-6, 122 yards, 1 TD) and Eden Johnson (3-for-8, 84 yards, 2 TDs) have played behind center in an offense that has outscored opponents in the first quarter, 125-0.

“We have to play within ourselves and stick together,” Flowers said. “No negative talk and no finger pointing. When we do this, we can put ourselves in a situation to be successful each play.”

Preview: Storylines abound in the latest installment of this gridiron tilt between the neighboring PAC Liberty rivals. Both are looking to claim sole possession of second place in the division and improve their positions in the District 1-6A rankings: Roberts (3-1, 6-2) is currently 11th, the Rams (3-1, 5-3) 14th. The game will also be part of Spring-Ford’s Homecoming celebration.

“Grimm is a shifty running back who has the ability to make people miss in space,” SF head coach Chad Brubaker noted. “We will have to take good pursuit angles and get multiple people to the ball.”

The Rams will look for quarterback Ryan Freed (104-for-144, 1,211 yards, 14 TDs) to keep their potent air offense going to the likes of Kolten Kqira (38-476) and Zach Zollers (33-429), both of whom have scored eight touchdowns. Harry Adifeyeh is out to record another 100-yard rushing game, having topped that mark three times already, and on defense Cole Turner remains the area’s leader in interceptions (five).

“We continue to play very well on defense and are continuing to get healthier on that side of the ball,” Brubaker added.

Preview: The Hill (0-2 Mid-Atlantic Prep League, 2-4 overall) has been in a scoring slump since its 35-0 win over Pennington Prep. The Rams have a combined 15 points in their last two outings.

The Hill is known to get a large number of players involved on the offensive side, as was the case in its game with Pennington Prep where a dozen Rams got touches. The defense has been sparked by the play of performers like Jake Voynar, who had a two-interception game against Pennington.

Last meeting: The Panthers lost to the Blue Storm three weeks ago, 38-24.

The teams are in position to be the KSFL’s top seeds for 2021 playoffs by virtue of season records.  Should host first-round games against Valley Forge MA and Delco Christian.