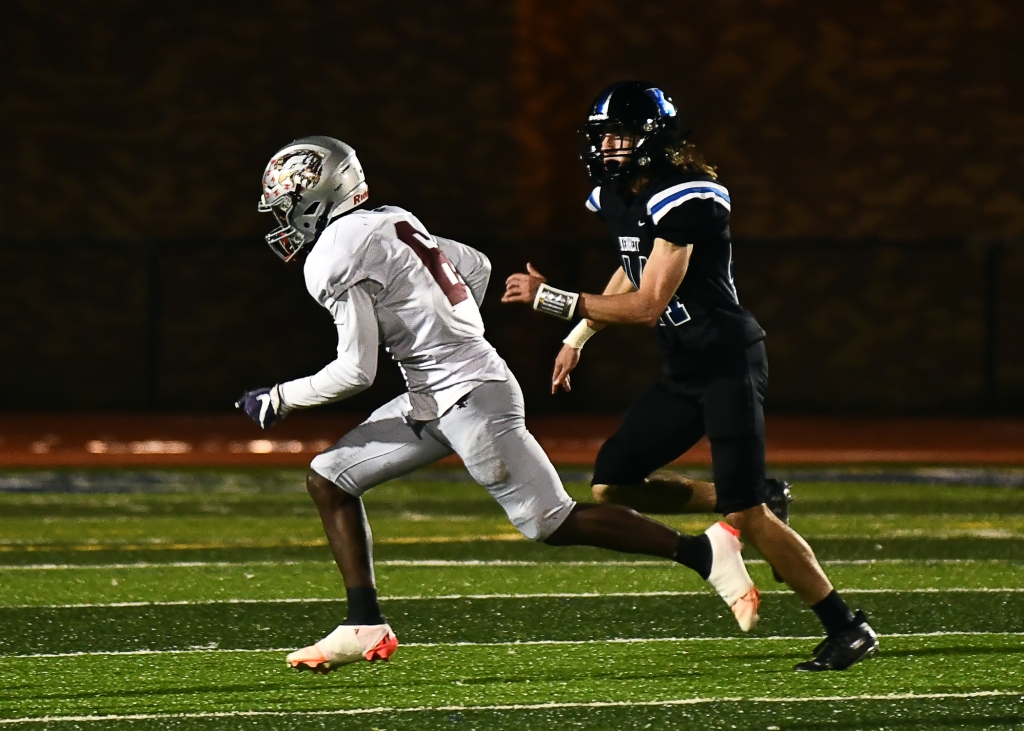 Chichester's Staring Reaves, running past a Kennett defender on a kick return in a game last month, scored two touchdowns Saturday in a 27-8 win over Interboro. (Bill Rudick/For MediaNews Group)

Chichester is putting the Del Val League on notice. The Eagles are coming for the title.

Zyair Bush had a big first half running the ball as Chi trounced Penn Wood, 37-0, for its third  straight win. Bush sprinted 27 yards for Chi’s first touchdown in the opening quarter. He also had an 80-yard run in the period as part of a 100-plus-yard performance.

The second quarter belonged to Quadir Blackwell, who scored on an end-around from 29 yards out to give Chi a 13-0 cushion. In the final seconds before the half, Blackwell found the end zone again on a three-yard run. Chi’s Staring Reaves also had a scoring rush.

Chichester continued its dominance of the winless Patriots (0-7, 0-3) after halftime. Eddie Swinton intercepted a pass and returned it to the 1-yard line. Reaves crossed the goal line for the second time to put Chi ahead by five TDs.

With two weeks left in the regular season, the Eagles (4-2) have a good chance at their first winning season since 2005. Next week they travel to Chester for a game for first place in the Del Val League. Chi is fighting for a district playoff spot in the Class 4A division.

In other football action Saturday:

Haverford School 31, Springside Chestnut Hill Academy 28 >> The Fords pulled off an amazing comeback to take their Inter-Ac League opener against the Blue Devils.

Trailing 28-7 at halftime, Haverford scored the game’s final 24 points. The win upped their overall record to 3-2.

The hero was kicker Ivan Harlamov, who drilled a 38-yard field goal as time expired for the win.

Haverford School is home Friday afternoon against Malvern Prep (4-2), which rolled to a 41-21 victory over Penn Charter.

Peterson scored on a pass from Shane Mulholland in the second quarter, then returned a punt 48 yards all the way early in the third to give B-P a 27-0 lead. In the fourth quarter, the senior running back snapped off a 20-yard rushing TD.

Mulholland’s quarterback keeper for 12 yards gave B-P a 6-0 lead in the first quarter. The Friars also scored off a blocked punt and a four-yard run by Answer Saie.

Neumann-Goretti 54, Archbishop Carroll 0 >> The Patriots (0-8) were shut out for the second straight week, this time to the Catholic League Blue Division-leading Saints (7-1).