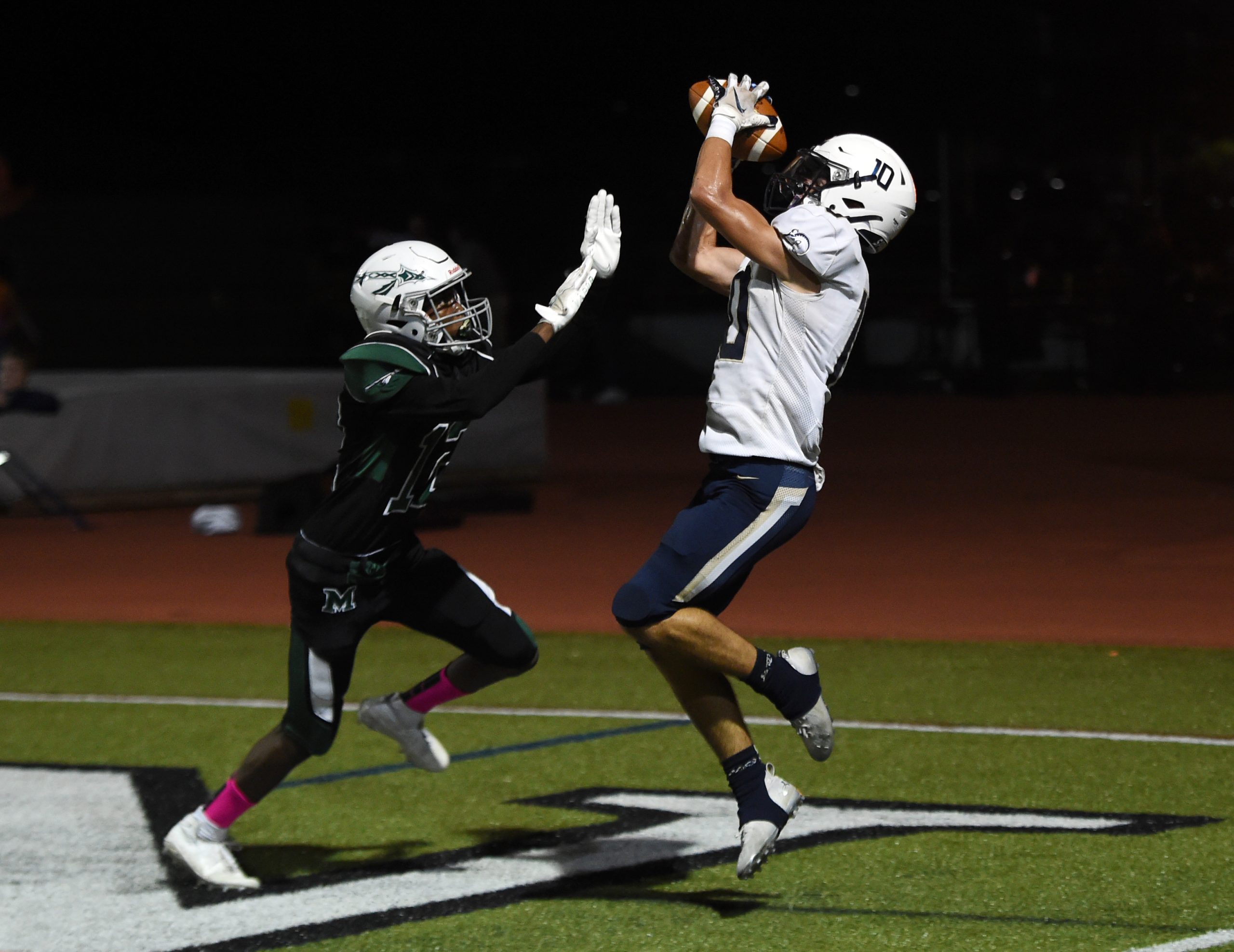 Senior quarterback Ryan Freed accounted for three touchdowns and the Rams’ defense put together a shutout performance that included two takeaways and a blocked punt to earn a 39-0 win over the Warriors — the 100th for 12th-year head coach Chad Brubaker.

Though Brubaker was unhappy with his team’s penalties and had not one but two coolers poured on him in the postgame celebration, he felt excited about the accomplishment — not just for himself but a program he’s spent building for more than a decade.

“It’s not something I honestly actively think about, but it was really special,” said Brubaker, who passed Marry Moore’s 99 wins for most all-time at Spring-Ford. “These kids made it special tonight, and they had a lot of nice things to say and that’s really what it’s all about.

“That number is not representative of me, that is a program. It’s coaches, kids, alums, Touchdown Club, parents. It’s all that. It’s important from that standpoint. It takes a lot of work, certainly on my part, but there’s people helping from all different angles.”

.@SFRamsFB’s Will Fish and Kolten Kqira had big nights in the Rams’ win over Methacton on Friday. pic.twitter.com/ntqknAoSyR

Freed completed 13 of 17 passes for 133 yards and a pair of scores in the Pioneer Athletic Conference Liberty Division victory. He also kept one himself for a touchdown run.

Senior Harry Adieyefeh carried 16 times for 133 yards, including a 71-yard touchdown run. Junior Will Fish added a short touchdown run to go with his blocked punt and sack.

“That’s awesome for Coach Bru,” Kqira said. “That’s really good for him. He’s done a lot for our program for sure.” The Rams jumped out to a 6-0 lead over Methacton (4-4, 1-3 PAC Liberty) when Freed connected with Zach Zollers on a five-yard touchdown pass with 8:27 left in the first quarter.

Methacton marched down the field on its third offensive possession, getting inside the red zone before Swanger intercepted a deflected pass.

Spring-Ford took advantage of the takeaway, marching 93 yards in 12 plays as Freed dove into the end zone on a rushing attempt to make the score 12-0 with 6:57 left in the second quarter.

Fish blocked a punt on Methacton’s ensuing offensive drive, and Zach Zollers tossed a 16-yard strike to Kqira on the next play to make it 18-0, a score that stood at halftime.

“I think those big plays, they shift the momentum to us and give us something to get our drives started off,” Fish said of the interception and blocked punt. “Obviously it gave us good field position and it just gets the offense going.”

Ryan Freed rolls out and reaches the pylon despite taking a hard hit. 12-0 Spring-Ford 6:57 left in Q2 pic.twitter.com/rzZ2OIkgT1

The Warriors tried to surprise Spring-Ford with an onside kick to start the second half, but instead the Rams took advantage of the good field position and took complete control of the game, 25-0, on Fish’s one-yard score with 7:02 left in the third quarter.

Adieyefeh broke off his 71-yard touchdown run on the Rams’ next drive to make it 32-0 after three quarters, and Freed tossed a short score to Swanger in the fourth to finish off the game’s scoring.

“There were two big plays in that first half, and then we thought we’d go for an onside kick in the second half, and it was close,” Methacton coach Brian Kennedy said. “We get that, who knows, we maybe get a little momentum going. Football’s a game of momentum and we never got momentum.” Methacton senior Dan Brandi completed 13 passes for 138 yards to lead the Warriors’ offense, which couldn’t get anything going on the ground against a stout Rams’ front. Senior Dean Sapalidis caught five passes for 37 yards, and senior Brian Dickey made three catches for 36 yards.

Dickey’s third grab of the game in the second quarter gave him the school’s record for career receptions. He can set the single-season mark with three more grabs in the team’s next two games.

Senior Giancarlo DeFilippis blocked a field goal, and senior Khaydon Smith intercepted a pass to add to the Warriors highlights on the day.

Sophomore Mike Bendowski added a late interception for the Rams, who recorded their second consecutive shutout and fourth overall this season.

“We were blitzing a lot, bringing a lot of pressure,” Fish said. “They were having a lot of trouble picking up our blitzes, but that was all in our preparation, film watching and our game plan.”

The Warriors travel to Perkiomen Valley next Friday for the Battle Ax rivalry, while the Rams take on Owen J. Roberts at home for their Senior Day.

Both Spring-Ford (No. 14) and OJR (No. 11) are District 1 Class 6A hopefuls. Brubaker noted each game down the stretch is a playoff game for the Rams, who likely need to win out in order to make another district playoff appearance.

“That’s our homecoming game, and just like tonight they’re going to give us our best game and we have to show up,” Kqira said. “We have to show up. It’s just showing up and doing our job. That’s Coach Brubaker’s biggest thing he’ll tell us is, ’Just do our job.’”

NOTES >> Friday was Methacton’s Senior Night. The Class of 2022, which is led by three-year starters Dickey, Matt Blakemore and Chris Augustine, helped turned a program around that went winless the year before they arrived and won just one game when they were freshmen. Former coach Dave Lotier returned Friday night to celebrate the group. “They’re a bunch of good football players, a bunch of good kids,” Kennedy said. “Hopefully they’ll excel at the next level.”