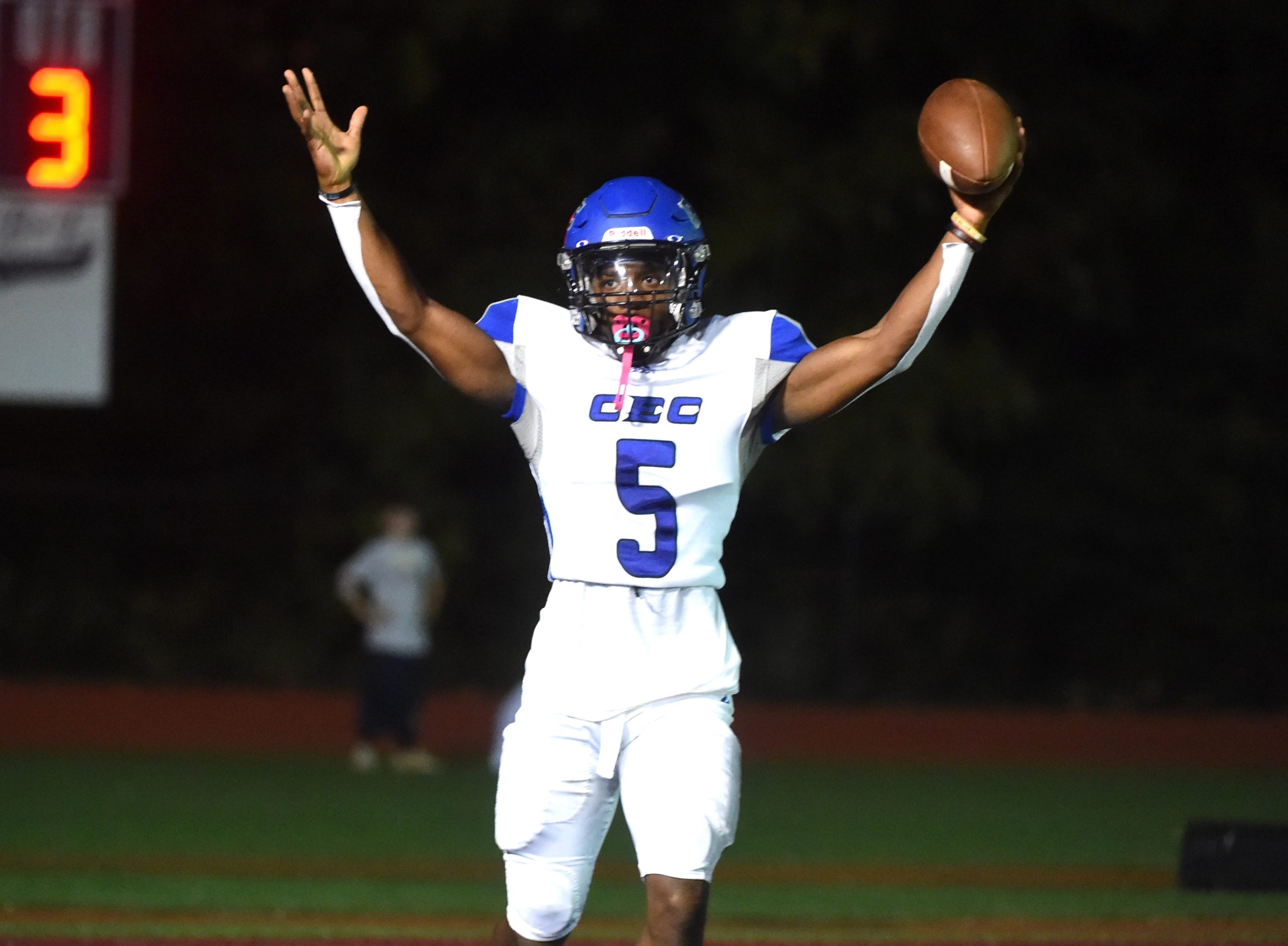 Conwell-Egan's Sam Cooper celebrates his second half touchdown reception against Cardinal O'Hara. The Eagles went on to a 32-14 victory. (PETE BANNAN - DAILY TIMES)

MARPLE — At the end of the offensive portion of just about every Conwell-Egan practice, Dante Morris and the first team would rehearse one last play.

One day, Morris figured, that hook-and-lateral would come in handy. When that day came, the Eagles wanted to have it down. Down 14 points to Cardinal O’Hara and backed up to their own 8-yard-line late in the second quarter, Friday became that day. And the Eagles were ready.

Conwell-Egan quarterback Dante Morris, left, broke the game open against Cardinal O’Hara in the second half with multiple long runs. CE went on to a 32-14 victory. (PETE BANNAN – DAILY TIMES)

A 92-yard hookup from Morris to Mekhi Harper, and lateraled to Sam Cooper, represented the first six of 32 unanswered points in a 32-14 win for Conwell-Egan.

The momentum flipped so quickly that O’Hara’s defense didn’t know quite what hit it. That stunner wouldn’t fade, even after the halftime reset, with the Eagles (6-2, 3-2 Catholic League Blue) scoring all four times they touched the ball after the break.

Morris hit Harper on an innocuous-looking eight-yard comeback route. As Harper was falling, in the grips of an O’Hara tackler, he offloaded to Cooper, looping past him at speed. Ball secured, Cooper dashed down the Egan sideline the final 83 yards to the house.

“The corner was playing deep off, so I knew Mekhi, I could get him the ball,” Morris said. “It was a great play by those two. Mekhi and Sam, they did a great job.”

The Eagles had tried to run a similar play in a loss to Bonner-Prendergast in Week 4. That time, Morris, then splitting snaps under center, couldn’t get the ball to Harper.

Friday, once the left signal-caller made the connection, the hard part was over.

“When Sam caught it and I saw him take off,” Morris said, “with his speed, I’m just back there like, yeah it’s a touchdown.”

To that point, Conwell-Egan had just 49 yards of total offense. It was staring at a 14-0 deficit with O’Hara (3-3, 3-2) looking to force a third punt in as many first-half series, and with consecutive deadball penalties having backed the Eagles up to the 8.

Jake Carbin to Xavier Tran in the end zone and he gets the foot down on third and goal. Beauty of a catch
14-0 O’Hara, 9:03 to half pic.twitter.com/4qEqBKzCPY

But once Cooper turned on the jets, the game completely flipped.

The first 20 minutes when about as well as O’Hara could’ve wanted. Off a three-point performance last week at Archbishop Ryan, quarterback Jake Carbin stitched together two composed drives to start the game. The first ended with Makaih Crawford, in place of the injured Danny McPhillips, twisting into the end zone from the two.

“We definitely had a burst in the running game,” Carbin said. “I think that was a struggle last week; I think on the whole offensive side of the ball last week, we struggled. So I think it was refreshing to come out and see something different, and I think that’s because we put the work in.”

The first drive covered 75 yards in nine plays. The second took 10 plays to get 66 yards, capped by Carbin throwing a perfect sideline route to Xavier Tran, who hauled it in and got a foot down on an eight-yard score on third and goal.

Donte Morris sets it up with a 61 yard run then finds Sam Cooper for a 3 yard TD om third and goal. Kick blocked though.
Ohara 14, Conwell-Egan 13, 8:33 left 3Q pic.twitter.com/YQ6NhcOjJt

O’Hara went into half still up 14-7. But any momentum had evaporated, and while Carbin took responsibility, there were many more who could’ve stepped up but didn’t.

“That can be deflating,” he said. “I think it’s my job as a quarterback and as a leader to make sure we’re staying on task and staying focused on doing what we have to do to put the ball in the end zone.”

Carbin finished 8-for-16 for 91 yards, with four completions to Frank DiDio for 54 yards. Crawford (17 carries, 50 yards) had just two yards after half, while Dante Paoletti rushed 10 times for 46 yards.

Cardinal O’Hara quarterback Jacob Carbin throws in the second half against Conwell-Egan. CE went on to a 32-14 victory. (PETE BANNAN – DAILY TIMES)

Conwell-Egan never relinquished the momentum. Morris busted a 61-yard run on the first series of the second half, executing a read option to perfection and using the aggressiveness of O’Hara’s stout defensive front against it. Three plays later, he found Cooper for a three-yard TD. With a blocked extra point, O’Hara still clung to a 14-13 lead.

The next time, Morris handled matters himself, sprinting 70 yards after pulling back a handoff off right end.  That put Conwell-Egan up for good at 19-14.

The Eagles also proved they can pound the rock, with a 13-play drive covering 74 yards and eating up 6:13 of the fourth quarter. It ended in a five-yard touchdown by Luke Trunell, to which he’d add a 15-yard score, and was set up by Morris finding Tim Gipli for 20 yards on third-and-10 at the 25. Morris ran 13 times for 167 yards. He was 3-for-6 through the air for 115. Trunell churned out 43 yards on the ground.

Against Bonner-Prendergast, with the game all but over, Morris helped the Eagles score late and threaten again in the final minute. That day, it didn’t make a difference. But in the three wins since, that fight has made all the difference.

“I said that if we keep playing like that, we’re going to win games,” Morris said. “That was one of these games, we were down 14-0, we came out in the second half and we shut everyone up.”