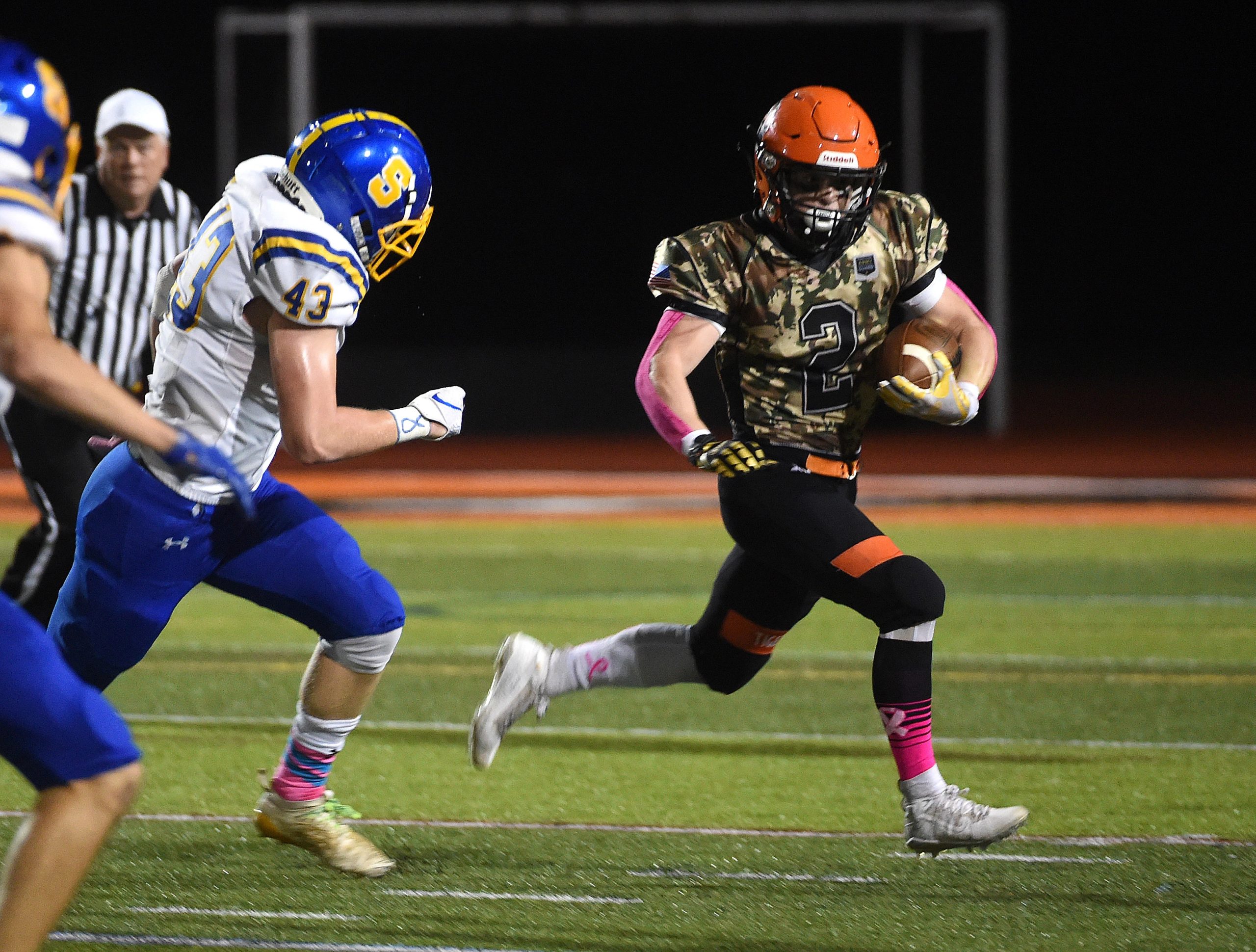 To Tigers senior Charlie Box, the number of touchdowns he scored – one – was far short of the number of linemen he wanted to thank for helping him gain 145 yards rushing.

When all of the announcements were finished and the final numbers had been crunched, Marple Newtown had earned an 18-7 decision over visiting Springfield, the Tigers’ fifth consecutive victory.

Box picked up his ground gains on 27 carries. He electrified the crowd when he grabbed the kickoff after Springfield’s third-quarter touchdown, broke through a pile of Cougars and didn’t stop until he had reached the end zone at the conclusion of a 76-yard play.

“He’s just insane,” Tigers head coach Chris Gicking said of the 5-9, 180-pound senior. “Our coaches had the line ready to play, and the kids followed the game plan and really executed tonight.”

Seniors Brian Foley, Bogsch and Gavin Garbutt and sophomores Andrew Kirlin and Jake McGowan did the work in the trenches for Marple Newtown (6-2, 5-2 Central League), with help from tight ends Matthew Cantwell and Owen Mathes.

“Those guys have gotten better every week,” Box said. “It’s fun running behind them.”

)Box, a Cornell lacrosse commit, also enjoyed himself on the kickoff return on which he scored.

“I just found a crease, broke a tackle and everyone on that unit did their job,” Box said.

While Box was trying to catch his breath on the sideline, the Springfield defensive line jumped into the neutral zone early as the teams lined up for the extra point. The call of “Charlie, Charlie” went out, and Box managed to get himself back to the field then got into the end zone with some extra effort on the two-point conversion run.

A missed field goal and a fumble had stopped Springfield (3-4, 3-3 Central) on its first two possessions. Sophomore Ty Can scored the only points of the first quarter with a 40-yard field goal for the Tigers.

A 57-yard Box run to the Cougars’ 5 late in the first half set the stage for sophomore quarterback David Bertoline’s short scoring run, making the halftime score 10-0.

The Cougars, who were hurt by 91 penalty yards and a pair of fumbles, got a 20-yard punt return from Matt Dickinson and a 31-yard completion from Jake Rama to Nate Cain before scoring their touchdown on receiver Robby Longo’s 14-yard run.

“It was a reverse,” Longo said. “The quarterback pitched the ball to me and I just took off.”

When Springfield kicked off, Box was waiting to take the momentum away from the visitors with his scoring sprint.

Rama, who attempted 42 passes and picked up 283 yards on 31 completions, went to the air a dozen times in the final four minutes but could not get his team past the Marple 20-yard line.

“This was a great team win for us,” Gicking said. “It was our defense that won the game for us. We held a good, well-coached team to seven points. We knew they had lost some tough games and that we’d have our work cut out for us.”

Bogsch had a sack in each half, two more tackles for losses and batted down a Rama pass attempt.

“I just come out here and try to keep all our players together,” said Bogsch, a former Vineland, N.J., resident who played football for the first time as a ninth grader. “The important thing isn’t what I do. It’s what we do.

“It got a little tough out there near the end with all of those passes. We’re happy we could hold that team to one touchdown. Now we have to get ready for our game against Conestoga. Then we play Harriton, and after that should be the playoffs.”