Phoenixville dominates 2nd half in win over Upper Merion 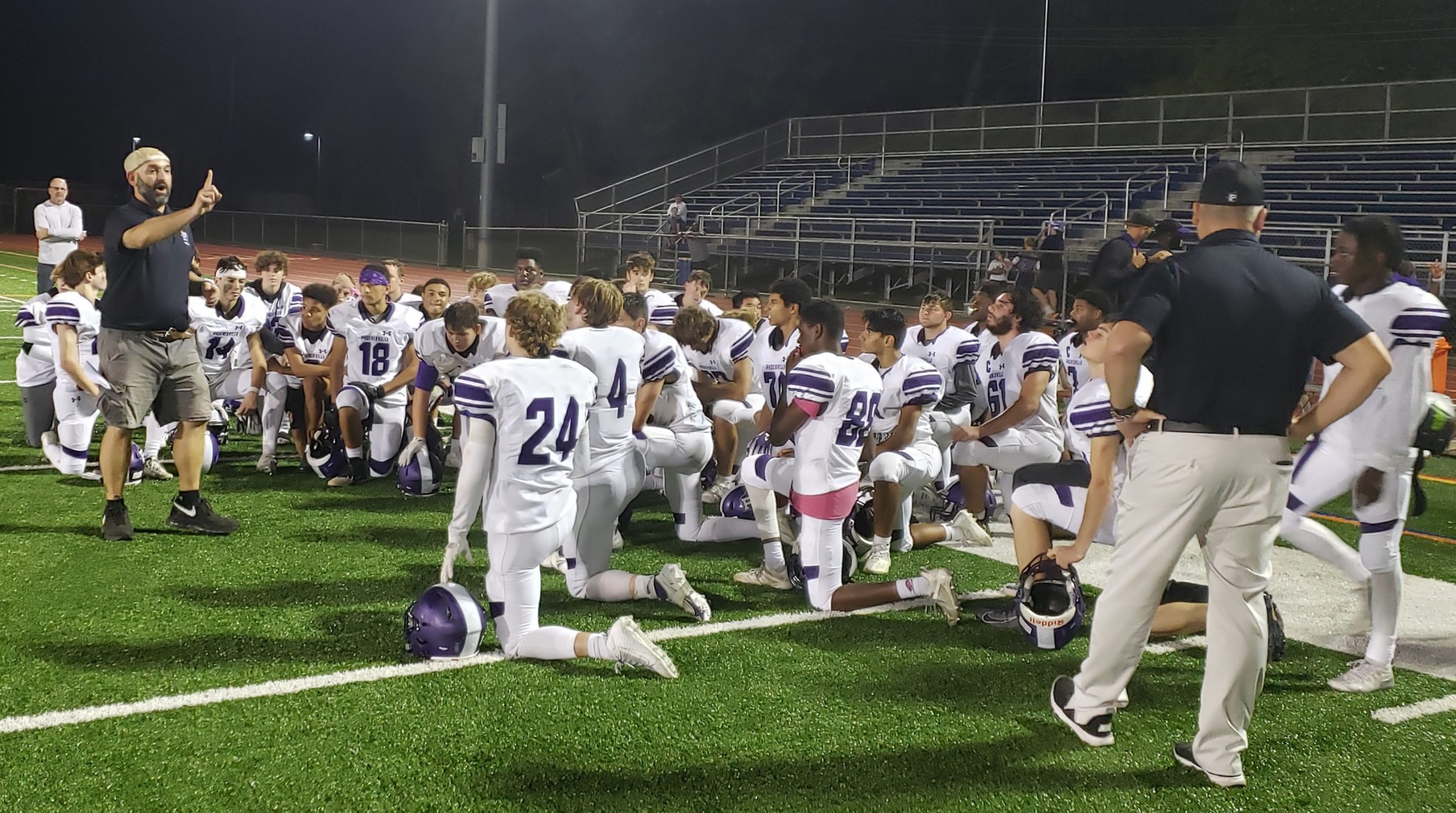 UPPER MERION >> Phoenixville left the halftime locker room like a team on a mission against Upper Merion Friday night.

The Phantoms defense forced a punt after five plays on the first possession of the third quarter and Owen Koch raced 71 yards for the go-ahead touchdown on the first play of the ensuing drive.

Koch and the Phoenixville defense dominated the entire second half and the Phantoms mission was accomplished. They picked up their first win over Upper Merion since the Vikings joined the PAC – a 41-24 Frontier Division victory – and improved their chances of making the District 1-5A playoffs.

“The seniors were freshmen last time we went (to district playoffs),” Phoenixville coach Anthony Ciarlello said. “We were yet to have beaten Upper Merion since they joined the PAC. This was a lot of other things other than just winning – it was beating a demon, it was conquering some fears, it was being down at half and coming back and actually winning a game this year.”

Phoenixville entered Friday night No. 14 in District 1-5A, where the top 16 teams qualify for playoffs.

“I haven’t been to playoffs in three years since my freshman year,” Koch said. “I never really got to play.Now I’m getting to bring my team to the playoffs. It’s unreal. I didn’t think I would make it this far, to be honest. We’re just a little school from Phoenixville.”

“I wanted to be patient,” Koch, who finished with what he believes to be a school record 273 rushing yards, said. “I knew if I was patient they were going to open up the outside. I knew my guys on the outside were going to get me blocks. I was just trying to stay patient in the backfield, make a move, maybe go in and then cut out. If I’m on the outside I’m pretty sure I’m gone. That’s my mantra.”

“(Koch’s) everything you want as a player,” Ciarlello said. “He’s coachable. He understands the game. His field IQ is huge. His motor doesn’t stop. He’s hateful – when he runs hateful, he was hateful tonight. You can’t be happy. Beginning of the year we didn’t get a lot of 4th-and-inches. I don’t think we were hateful then. We didn’t have any rage. I think he’s starting to become hateful. He’s running angry like he hates the ground.”

While Koch’s numbers standout from the second half, it was quarterback Ty Romance who had maybe the play of the game. On the third play of the fourth quarter with a 20-17 lead, the Phantoms faced 4th-and-17 from the Upper Merion 24-yard line. Romance evaded a sack, rolled left and threw a strike to Sam Moore for 19 yards and a first down. Koch’s five-yard score made it a 10-point lead on the following play.

“Ty – we talked about how we have to stop letting other dogs push us around in the park,” Ciarlello said. “I talked to Ty before the game – I talked to all of them – I said it’s time you be the dog. You guys bite. No more barking. Little dogs bark. Be a big dog and bite.”

While the Phantoms offense was humming, its defense was forcing punts. They made Upper Merion punt on its first four possessions of the second half before getting a turnover on downs on the fifth possession.The Vikings (3-4, 1-3 PAC Frontier) put together a 10-play, 67-yard touchdown drive with 17 seconds remaining to make it 41-24.

“We changed our scheme,” Koch said. “We started doing blitzes on the outside to keep (Upper Merion QB Zayd Etheridge) contained. He’s a really good quarterback, he can get out of a lot of things. We were trying to keep him contained. It didn’t work a lot of times, but we tried to keep him hemmed in and we were guarding the receivers downfield pretty well.”

Upper Merion didn’t do itself any favors in the second half, committing seven penalties for 45 yards.

“I wish I knew (how the game got away),” Upper Merion coach Davis Chubb said. “I’ve never wanted to look at a film more than I want to look at this one. Penalties absolutely killed us. We shot ourselves in the foot. Had momentum, little things – you have to take care of the little things to be successful. We had control going into the second half, we felt good about it, we had a lead, but we didn’t take care of the little things. Phoenixville did. Kudos to them. That’s a well-coached group. They’re a tough football team.”

The game started with both offenses putting together long drives but coming up with no points. Phoenixville drove to the Upper Merion 16-yard line on the opening possession, but a bad snap on a field goal attempt led to an empty trip. The Vikings responded by driving to the Phantoms 14-yard line, but Phoenixville’s Ahmid Spivey grabbed on interception to keep it a scoreless game.

Upper Merion got on the board first early in the second quarter. After a blocked punt, Brayden Marino got three straight carries inside the 10, punching the third one in for a touchdown from two yards out.

Phoenixville responded with a five-play, 73-yard touchdown drive. Romance capped it off with a 26-yard strike to Hayden Tenbroeck to tie the game, 7-7.

After an Upper Merion punt, Romance and Tenbroeck connected again for a touchdown – this one from 22 yards away. A missed extra point made it 13-7 Phoenixville.

Etheridge put the Vikings back on top, 14-13, when he found Nolan Clayton for a 38-yard touchdown on 4th-and-8. After Marino grabbed an interception on the ensuing possession, UM kicker Cyrus Palladino hit a 34-yard field goal as time expired to send his side to the locker room ahead, 17-13.

While the win helps Phoenixville’s District 1-5A playoff chances, the loss hurts Upper Merion. The Vikings entered Friday No. 12 in the rankings.

“I think we need to win and then win again Week 10,” Chubb said of the Vikings playoff hopes. “Now, who knows who we’ll match up with (in Week 10). Any of those teams – Owen J., Boyertown – they’re all good teams. We control our own destiny still, luckily, but it’s not the way we thought this was going to go. We’re on a slide and we have to correct it. We preach staying together, we preach loving each other. This adversity is testing our character.”