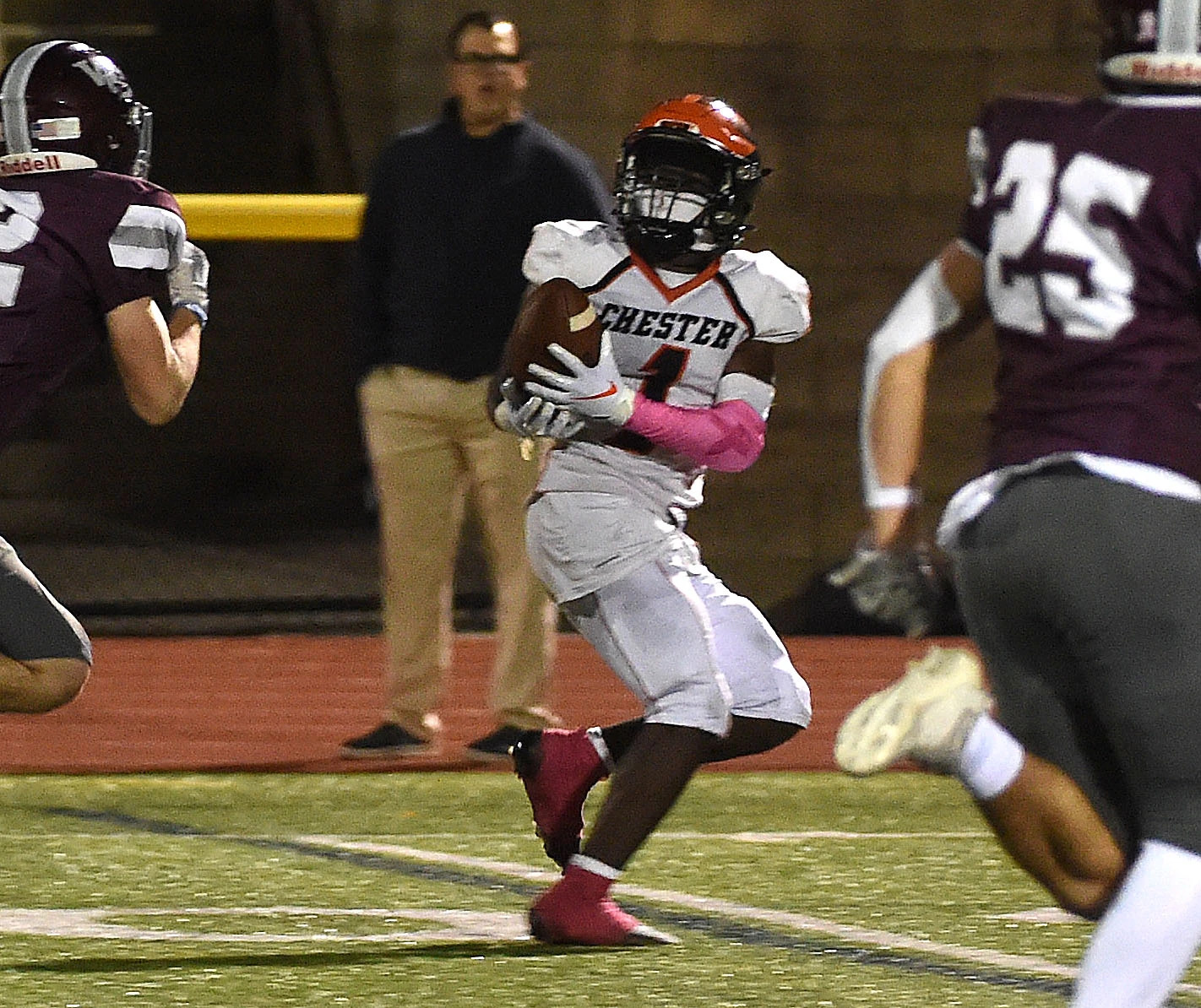 CHESTER — Homecoming at Chester is so much more than a school event to crown a king and queen. It’s a party unlike any other in Delaware County.

Ninety minutes before the Clippers trounced Penn Wood, 39-6, the savory smells of pork BBQ were in the air on 10th and Lamokin Streets. Alumni tents were pitched in the parking lot, and the music was blaring. Saturday was all about celebrating a city via a team that is having a historic season.

The Clippers arrived by foot from the high school, marching together in a parade-like formation. They were greeted by loud cheers in a special moment for the players.

“You feel the energy and you feel the love and the support,” said senior quarterback Isaiah Freeman, who passed for 155 yards with a touchdown. He also ran for 75 yards and two TDs,  a decent encore from last week’s five-touchdown performance. “Everybody is behind you and it’s a great experience.”

Chester is 7-0 for the first time since at least 1939. With three games left in the regular season, the Clippers own the No. 1 spot in the District 1 Class 5A playoff standings, and they’re 2-0 in the Del Val.

“We’re giving the city what we want, what we need,” wide receiver Will Smith. “That’s to win every week.”

While the Clippers were sizable favorites against the rebuilding Patriots (0-6, 0-1), the final score was a bit deceptive. At halftime, the hosts clung to a 14-6 lead after Penn Wood sophomore quarterback Kivaleon Clarke connected with Jayon Hailey for a 53-yard touchdown pass late in the second quarter. The atmosphere was incredible for the Clippers, and they certainly fed off the crowd’s energy, but coach Ladontay Bell had expected more from his group.

Sure enough, once the second half got under way, the Clippers put on a show. They closed the game with 26 unanswered points.

“Offense is all about rhythm and what we didn’t do early on was find our rhythm. So, at halftime, we did make adjustments,” Bell said. “We wanted to make sure we kept the ball on the ground and let the run game open up the pass game. That’s what we did and we had success.”

The Patriots didn’t resemble a winless team Saturday, at least in the first half. They weren’t expected to hang around with the undefeated Clippers, but coach Ato Troop had his crew ready to play.

“I was disappointed, to be honest. We had too many malfunctions,” Bell said. “And we wanted to capitalize on some things today as we get ready to go up against a great team in Coatesville next week. This upcoming week of practice is going to be very detailed and very intense, and today I wanted our guys to be locked. In practice this week, there’s going to be a lot of hard work and a lot of detail and focus. We’ve got to be a different team and play better together.”

For a few hours, at least, Bell and the Clippers were able to celebrate their win before thinking too much about District 1 Class 6A superpower Coatesville (6-1), which handed Downingtown West a 31-28 loss Friday night. The team that showed up after halftime was more to Bell’s expectations.

The Clippers opened the third quarter with a 16-play drive that resulted in zero points. After Chester’s defense forced a quick three-and-out, Freeman scrambled 20 yards to the end zone to give the Clippers a 20-6 lead.

The Clippers pulled away with three touchdowns in the fourth quarter. First, Smith (seven catches, 109 yards) hauled in a 24-yard pass from Freeman for an easy score, Jab’ree Davis rumbled across the goal line from three yards out, then sophomore linebacker Ed Toy intercepted Clarke from behind the line of scrimmage and scampered 40 yards untouched to the end zone.

What had been an uncomfortable lead at intermission turned into a laugher in a hurry.

Noble Thompson, a junior linebacker/running back, had another strong game on defense. He brought down Hailey in the end zone for a safety on the first play from scrimmage and finished with seven tackles.

E’shone Nickens ran for a game-high 101 yards, and Cymeer Brown had a 40-yard touchdown run in the first quarter.  The Clippers totaled 323 yards rushing on only 33 carries and racked up 21 first downs.