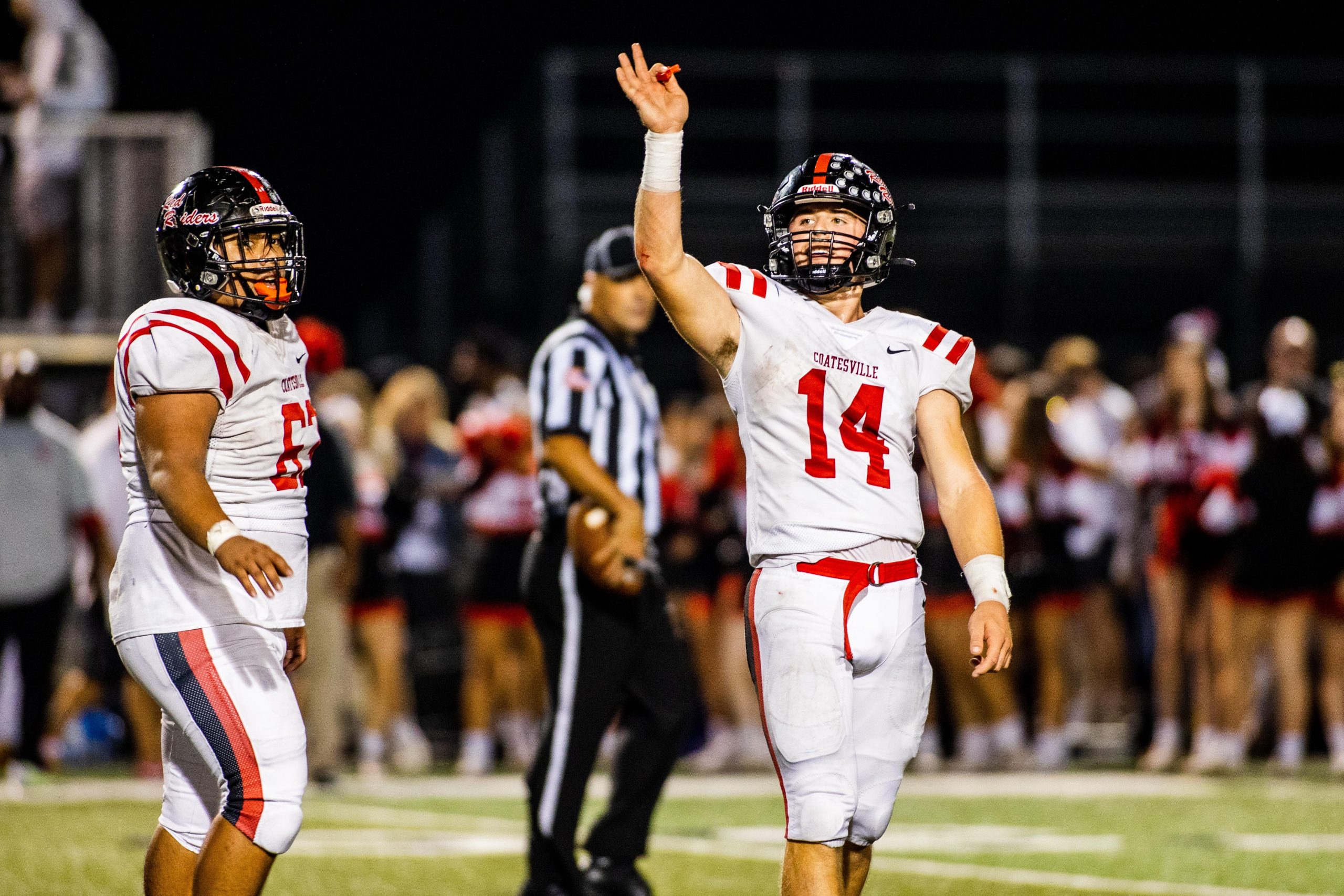 Week Seven of the scholastic football season is in the books and there were many impressive and in some cases, surprising performances. Possibly the most exciting game of the weekend came at Kottmeyer Stadium Friday night as Coatesville snatched victory from the jaws of defeat, coming back in the final three minutes of the fourth period to down Downingtown West.
Coatesville quarterback Harrison Susi hit James Taylor in the end zone with a perfect 19 yard touchdown toss to give the Red Raiders a thrilling 31-28 win over a game Whippets squad that dropped to 3-4 on the season. Susi is a big time playmaker who rushed for 154 yards and two touchdowns while throwing for another 163. The Red Raiders never stopped believing and they moved up to the third spot in the District 1 6A playoff point race. The Red Raiders travel to Chester this Saturday to play a 7-0 Chester team before finishing at home against Bishop Shanahan and Downingtown East.
Unionville bounced back from its first loss of the season last week at Downingtown East by running over Kennett 42-7. The Longhorns controlled both lines of scrimmage and contained Kennett quarterback Kalen Frazier. The Longhorns got big offensive games from quarterback Matt McCloskey and running back Ethan Bennink. Unionville is currently fifth in the District 1 5A playoff point race.
Oxford continues to have a successful season as the Hornets defense led the way in a 21-14 win over Great Valley. The Oxford defense allowed the Patriots just 151 yards of total offense and are currently in the 5A playoff picture. Oxford head coach Mike Means has made steady improvement in the Hornets program and they are not an easy game for anyone anymore.
Downingtown East improved to 6-1 on the season with a strange 25-20 win over Academy park Saturday night. The Cougars used two Academy Park safeties on punt attempts and appeared to have theme in hand, despite the Knights having the ball with a little over one minute to go, with a chance to win the game. AJ Lehman ended the Knights hopes with interception. The Cougars host an improved Avon Grove team this Friday.
Conestoga lost for only the second time this season, dropping a 35-14 decision to Strath-Haven at home, Friday night. The visiting Panthers did not throw a pass, but they rushed for 350 yards on 35 attempts. Conestoga is currently 11th in the 6A playoff race and have a home date with Upper Darby this Friday.
Around District 1, there are only three 6A undefeated teams. Garnet Valley, North Penn and Quakertown are all 7-0, and it looks like all three will end the regular season undefeated. The trio currently occupies three of the top four spots the 6A race with Coatesville, at 6-1 breaking in at number three.