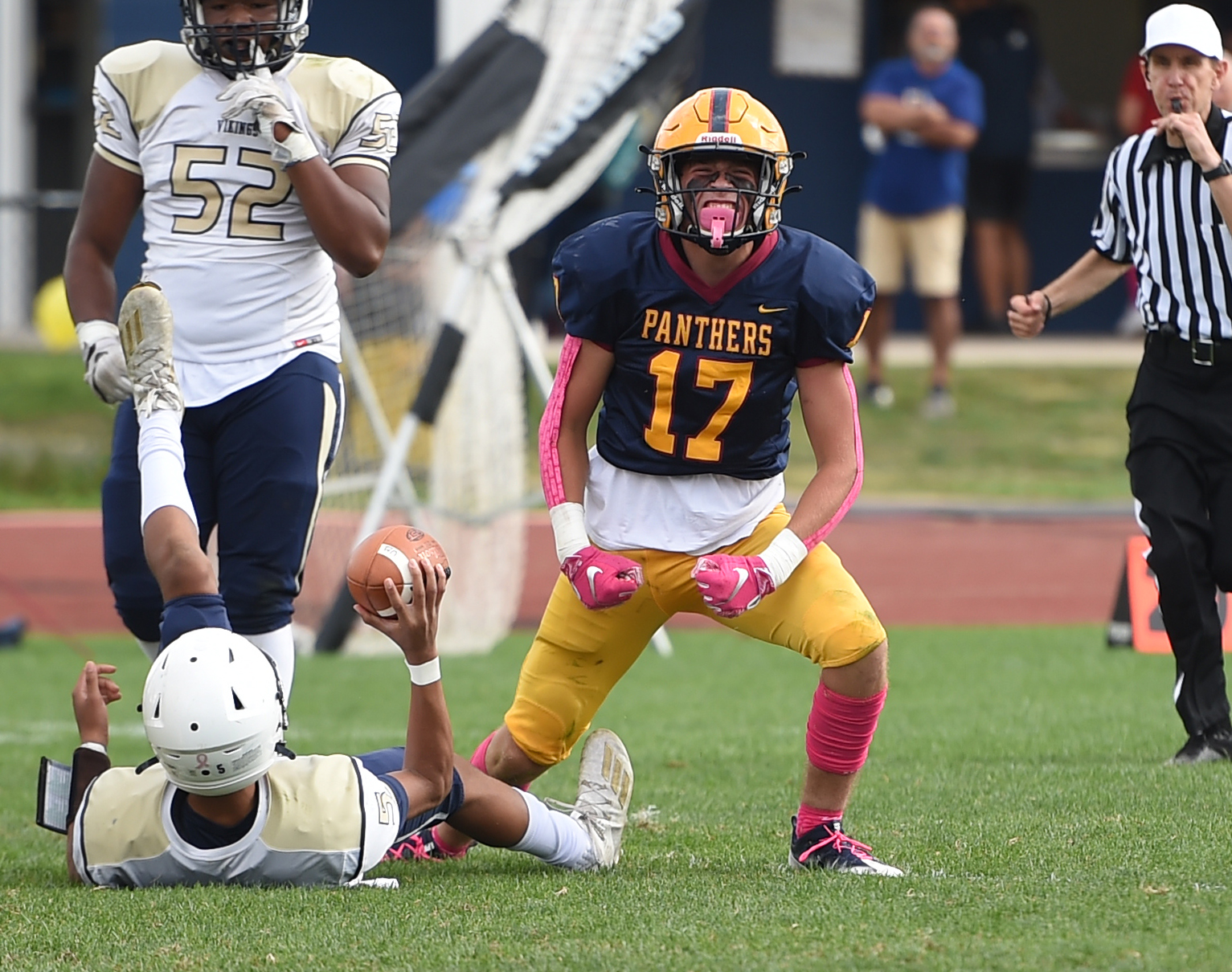 UPPER PROVIDENCE >> Salt and pepper, sugar and spice, bread and butter … some things just go together perfectly, be it by chance or design.

Pope John Paul II has such a combination in its offensive backfield; namely, Josh Little and Steele Depetrillo. The senior running backs are forming a formidable duo: Little the shifty speedster, Depetrillo the straight-ahead plowtruck.

They were at their complementary best Saturday, when PJP hosted Upper Merion with implications for the upper level of the Pioneer Athletic Conference’s Frontier Division. They played their own styles, in addition to contributing to other aspects of the Golden Panther game plan, to help forge a 39-6 win over the Vikings.

Little had touchdown runs of three and five yards in the second half, the high points of his 88-yard rushing day. He was also prominent in a passing game that got PJP (3-0 division, 5-2 PAC) out to a 20-point lead in the first half, hauling in six passes for 63 yards.

“I want to give it all for my team,” Little said. “I attack my routes, and (quarterback D.J.) Clarke got the ball to me.”

Depetrillo got the Panthers going on their first possession, catching a 16-yard pass from Clarke with less than 6-1/2 minutes left in the first quarter. He ended up with 66 all-purpose yards, rushing for 41 — the longest tote a 30-yarder up the middle early in the third quarter — and getting the other 25 on a pair of receptions.

“I consider myself a ‘3rd and short’ back, with speed and power,” he said.

Depetrillo displayed his speed in a different situation. Intercepting a pass by UM quarterback Zayd Etheridge at his 17, he outran the Vikings along the PJP sideline to the end zone, capping the day’s scoring with 7:20 left in the game.

“I wanted to give my body a rest on that play,” he explained, a contrast to the hard hits running at the Merion defense the better part of the afternoon.

The Little/Depetrillo collaboration was part of a greater teamwork displayed by the Panthers … one Graver has been seeking all season.

Josh Little goes for another score. 32-6 PJP with 11:21 to go in the game. pic.twitter.com/bkXqew2nzY

Josh Little beats everyone to the outside for his 14th TD of the season. 26-6 PJP with 3:47 left in Q3. pic.twitter.com/vT5asE3kZw

For Upper Merion (1-2, 3-3), the message in the post-game huddle is soul-searching at all levels.

“We have to do a better job during the week getting ready in mindset and physical shape. The guys are better players than this.”

The Vikes’ one success at hitting paydirt came early in the second half. With PJP marching near midfield, Marcus Crittendon intercepted a Clarke pass and returned it to the Panther 15. Three plays later, Etheridge found Nolan Clayton at the other end of a 14-yard pass with 8:17 left in the third.

“That was a big response from a steady player,” Chubb said. “Crittendon made a huge play.”

That was the brightest spot of the day for UM, which got into PJP territory only three other times. The one foray, set up by Crittendon recovering a blocked Panther punt attempt at the 39, ended two plays later with Little intercepting an Etheridge pass; another, on its last posession, ended on downs at the 37.

“Our defensive tackles, Nyzir Lake and Jacob Dobrowolski, were a big part of that,” Depetrillo said. “It’s our ‘next play’ mentality.”

“In ‘man’ defense, a linebacker has to account for the running back,” Graver noted. “We like that matchup.”

Joe Pickell and Brent Mitala factored in the Panthers’ passing game, both catching TD tosses from Clarke. Pickell had a 46-yard connection late in the first quarter, and Mitala caught a 30-yard scoring pass about a half-minute before the first half ended.

Clarke (12-for-17, 183 yards) completed his first eight throws before missing. Behind Little, Pickell had two catches for 59 yards.

Defensively, PJP had a number of contributors outside the turnover-forcing of Little and Depetrillo. T.J. Boccella and Chase Frantz had sacks of Etheridge,  and Lake and M.J. Petro made key stops on UM rushes.

Having slipped out of the division-championship conversation, the Vikings now have games against Phoenixville and Pottstown on the horizon. They are looking to upgrade from the 2-3 mark they compiled in 2020’s pandemic-impacted, abbreviated season.

“We have to have a short memory,” Chubb said. “We have a tough week ahead.”

NOTES >> Pope John Paul II integrated two ceremonies into the afternoon of football. It conducted Senior/Parent Recognition Day for members of the football and cheerleading squads prior to the contest. At halftime, it inducted six individuals into its 2020 Legacy of Impact Hall of Fame class. … Two former coaching legends at St. Pius X, Ed Dobry (track & field) and Tom McGee (basketball), were inducted alongside Marusia Griffin Lynn, Chalres Heavey, Michele Murphyand Sandy Nadwodny. … Two other notable players on the UM defense were Jsun Hampton-Miller, who sacked Clarke in the first quarter, and Bradley Zielinski, who recovered a fumble at the beginning of the second quarter. … Etheridge, playing almost all the snaps behind center, completed 10 passes for 63 yards. His favorite target was Joseph Kovacic, with four catches covering 29 yards.