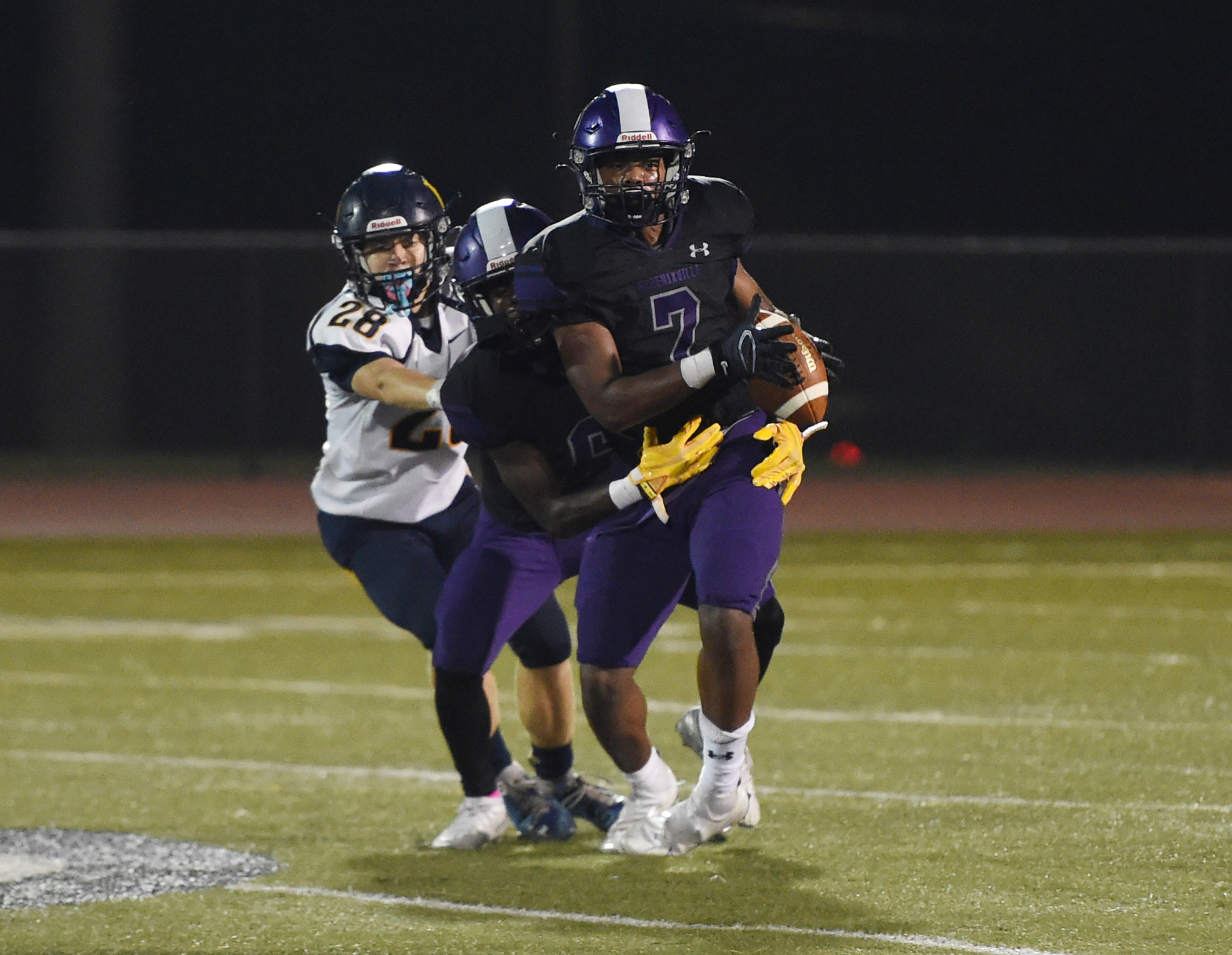 PHOENIXVILLE >> One of Tre Davis’ listed positions on the Phoenixville football roster is ‘athlete’.

Along with playing free safety on defense, the former quarterback runs, receives and returns for the Phantoms.

Davis proved himself a weapon in all three facets during a 48-9 Pioneer Athletic Conference Frontier Division win over Upper Perkiomen on Friday.

“My whole life, I’ve moved from position to position, here, there and just plugged in,” Davis said. “I just play my role.”

“The coaches put me in spots to perform every single week. They put me in position, the other players evolve and we get better as a whole. Whatever I need to do for our team, I’m going to do it to my fullest ability.”

Senior running back Owen Koch added 13 carries for 83 yards and three touchdowns for the Phantoms. Junior Ali Green returned an interception 90 yard for a touchdown in the fourth quarter to cap the Phantoms’ scoring.

It was the first win in three weeks for the Phoenixville (2-4 overall, 1-2 PAC Frontier), and they earned it on Senior Night in front of a lively crowd.

“It’s awesome. I could not ask for anything better,” Koch said of the Senior Night win. “It’s nice to have people back actually. I’ve never really had the atmosphere besides freshman year and I didn’t really play that much. It’s great this year, our student section is actually pretty cool and they get loud and it’s awesome.”

A 38-yard pass from sophomore quarterback to Ty Romance to classmate Hayden Tenbroeck on Phoenixville’s first offensive drive set up Koch’s first touchdown run — a 21-yard score with 4:01 left in the first quarter.

The Indians (2-5, 1-2) answered right back when senior Logan Simmon returned the ensuing kickoff 85 yards for a score to make it a 7-6 ball game.

“Our guys did a good job of holding a block,” Simmon said of the kick return touchdown. “One second is all needed. I just got right through the hole and down the sideline.”

Davis broke off his 50-yard touchdown run a few plays after Simmon’s return to put the Phantoms up 14-6 after the first quarter. After UP sophomore Logan Watkins booted a 22-yard field goal, Koch punched in a two-yard rushing score to send the Phantoms into the half with a 22-9 halftime advantage.

A tight ball game began to turn into a lopsided contest when Davis scooped up a punt off the bounce made two defenders miss, broke the tackle of a third and sprinted down the sideline for a punt return touchdown with 7:37 to go in the third.

Less than five minutes later he picked off a pass and took it to the house. Suddenly the Phantoms were on their way to a romp — up 35-9 with 2:55 to go in the third.

“This kid’s a great player,” Koch said. “Anything he does, he gives his heart in. That’s just all I can ask for.”

Mason Koch also picked off a pass and Sam Moore recovered a fumble for Phoenixville. Freshman Myles Tenbroeck added a late sack, and sophomore Darius Watson was an energizing presence at linebacker.

Phoenixville junior Ahmid Spivey carried twice in the game for 84 yards, including a 70-yard run. Romance passed just six times in the contest, connecting on three of his six throws for 48 yards.

“Those dudes did a great job today,” Owen Koch said of the offensive line. “The wide receivers blocked well today too. I just have a motive to keep going. I just think in my mind, ‘No one can stop me,’ and I just keep moving.”

The Indians couldn’t follow up last week’s dominant 29-0 win over Pottstown, turning the ball over four times in the contest.

They travel to Pottsgrove next week before finishing their Frontier schedule against Upper Merion at home Oct. 22.

“I think we just gotta go to practice Monday and just do what we do, just keep working hard,” Simmon said.

The Phantoms play at Upper Merion next week in a game that will be very important for their postseason fate.

With games against the Vikings, Pottstown and a PAC Crossover opponent still on the schedule, Phoenixville ranks No. 15 in the District 1-5A power rankings. Sixteen teams make the Class 5A playoffs.

“We’re going to take this one win at a time,” Davis said. “We’ve got 24 hours to celebrate and we’re back in the lab, back at it again.”

“We’ve got a big game next week and I think if we win that we have a good chance of making the playoffs and making a run there,” Koch added. “We’re coming for it.”