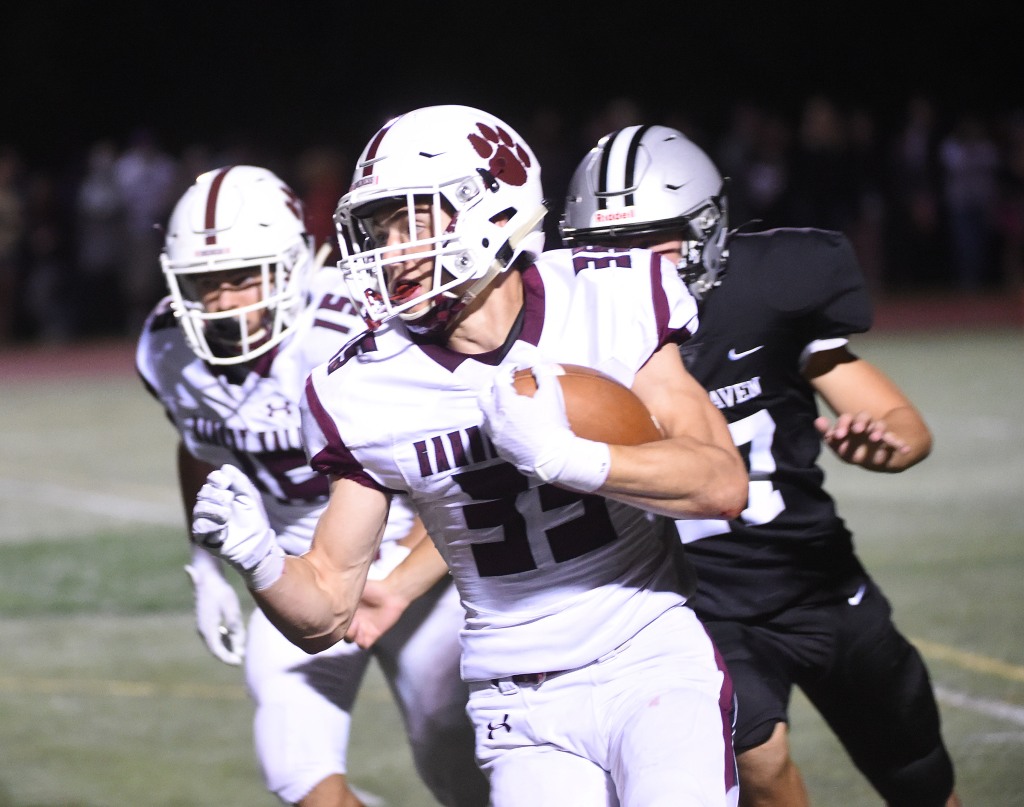 Garnet Valley's Sean Gallagher, seen in a game against Strath Haven, set up a touchdown with a long run in Friday's 41-0 win over Radnor. (PETE BANNAN/MEDIANEWS GROUP)

CONCORD — A telling victory a week earlier had Garnet Valley football fans thinking ahead to the possibility of postseason delight. As for the Jaguars, they were only half-satisfied.

The real fulfillment would not come until Friday night’s 41-0 victory over visiting Radnor.

“We went back, watched film and figured out what we needed to do,” outside linebacker and safety Drew Van Horn said. “We knew we could get better. And there was nothing we could do other than come out and work hard.”

That wake-up moment, if it was one, came in a 65-37 victory at Ridley that tended to underline Garnet Valley’s Central League dominance. But it wasn’t the 65 that caught the Jags’ attention. It was the 37.

By Friday, when they would limit the injury-challenged Raptors (1-6, 1-5 Central) to 86 yards of offense, the Jags appeared to be peaking not just on offense, but on the side of the line of scrimmage that will matter just as heavily in the postseason.

“We played great defense,” coach Mike Ricci said. “We’re improving every day. And that’s what we want to do.”

Van Horn was smothering, both in run and pass coverage, while also gaining 37 yards on a couple of carries.

Radnor enjoyed 46 receiving yards from Tommy Deshan. The Raptors did use a 12-play, 51-yard drive to churn to the Garnet Valley 11 in the second quarter, already down five touchdowns. But the Jaguars’ defense was at its best when it most mattered, showing why they have not lost a game since 2019.

“They are obviously well coached and have great athletes,” Radnor coach Tom Ryan said. “We had our chance to get in the end zone but just didn’t finish. And obviously we’re pulling for Garnet to keep things rolling and represent the Central League well going forward.”

The Jags rolled early, spicing a nine-play drive with a 33-yard Sean Gallagher reception before Saunders scored on a five-yard run. Carter Wilson blocked a Radnor punt and recovered the ball at the one on the next drive, with Saunders stepping into the end zone a play later.

One play after a short Radnor punt, Busenkell raced 25 yards with a keeper for a touchdown. Teh quarterback flipped second-quarter TD passes of 17 yards to Lassik and 49 yards to Saunders as Garnet Valley took a 35-0 lead that keyed a second-half speed-up situation. And on the first play of the fourth quarter, Westburg’s 30-yard run provided the final score.

The Jags have league games remaining with Haverford, Springfield and Lower Merion before challenging themselves in the postseason.

The offense, ever dangerous, will help.

The defense, on full display Friday, will too.

“We just know if each and every person does their assignment, that as a team, we will stop them together,” Van Horn said. “That definitely showed tonight.”