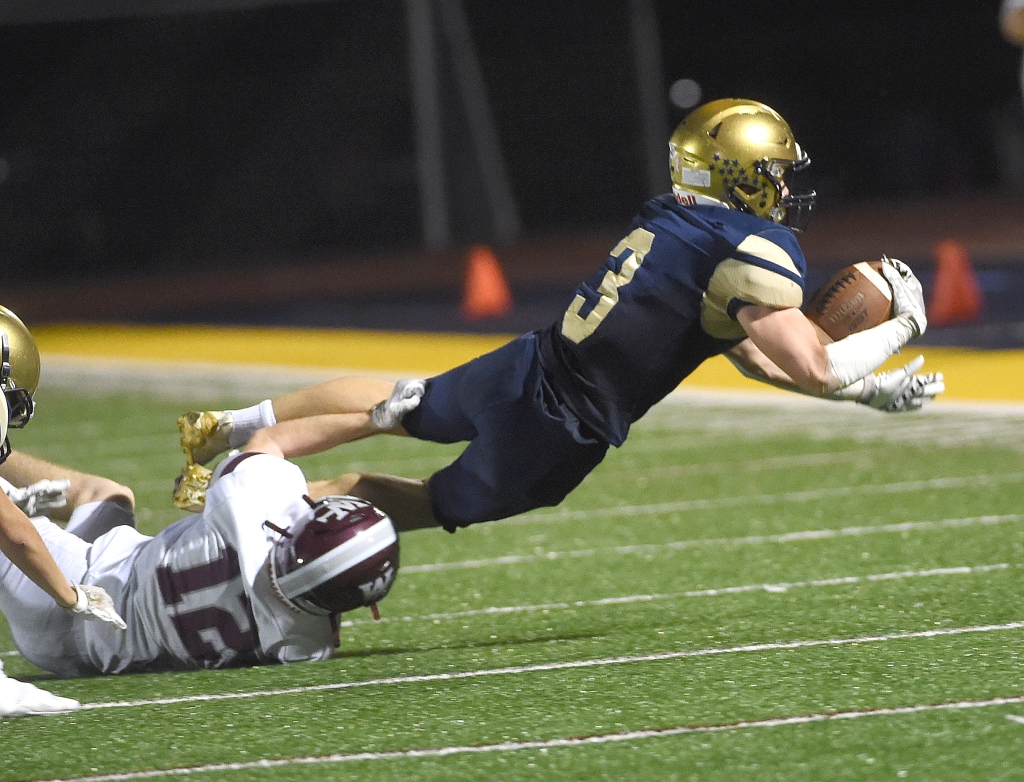 Sun Valley's Andrew Kmett, right, is taken down by Henderson's Seamus Murphy in the first half. (PETE BANNAN - DAILY TIMES)

ASTON – If there is a trait that has defined Sun Valley this season, it is the Vanguards’ collective toughness. They will battle until the final whistle, even on nights when things do not totally go their way … such as Friday night against West Chester Henderson.

Sun Valley suffered through three lost fumbles and 13 penalties on the way to dropping a 21-14 decision to the Warriors, which left both teams feeling a little dissatisfied.

“I tip my hat to my team, they grind and grind,” Vanguards coach Ernie Ellis said after SV slipped to 2-5 overall. “When they get down, they keep getting back up. I can’t ask for anything more from them. That’s what we’re trying to build. It’s going to pay off for years to come because guys are going to know that it’s not about how many times you get knocked down, it’s about how times you get back up.

“We’re still learning how to compete on a daily basis, and they’re impressing me … but we have to learn how to win consistently now.”

Visiting Henderson got started early with a touchdown on its first drive, but it would be the last score of the first half. Senior quarterback Eddie Smink hit Logan Krapf with an 18-yard scoring pass for the early 7-0 advantage.

Sun Valley was moving the ball effectively early through the air and on the ground, but seven first half penalties and a fumble were detrimental to the Vanguards’ scoring hopes. Warriors coach John Lunardi acknowledged he knew his team needed a more complete effort in the second half to hold off the home team.

“I’m pleased with the way we played at times in the second half, but we just flat out have to be better,” said Lunardi, whose team improved to 3-4 overall. “We’re certainly pleased to come out with a win. Sun Valley played tough and exploited some things on us.”

Henderson forced a Sun Valley fumble on the first play of the second half, which was scooped up by Smink, who rambled 24 yards to the end zone for a 14-0 lead.

“Our coach gave me a weakside blitz off of the backside. I came around and my buddy, Dylan Grim, made a great form tackle and the ball ended up poppin’ out,” Smink said. “That’s kind of what a kid dreams about. Picking up the ball, running, and scoring in the end zone untouched. It can’t get much better than that in high school football.”

On the ensuing drive, Connor Griesser sacked Sun Valley quarterback Steve Eskridge and forced yet another fumble. That would effectively seal the deal for Sun Valley midway through the third quarter as Smink added another touchdown with a one-yard sneak into the end zone.

“I think we came out a little soft, but we came together as a team,” Smink said. “My guys pushed me and I pushed them. Sun Valley is a great football team and they fought hard.”

After falling behind 21-0, Todd Harper came to life for the Vanguards, but it was ultimately too little, too late. Harper, who finished with 128 yards rushing, scored two second half touchdowns to help make the game tight, but Henderson had just enough in the tank to hold off the Vanguards.