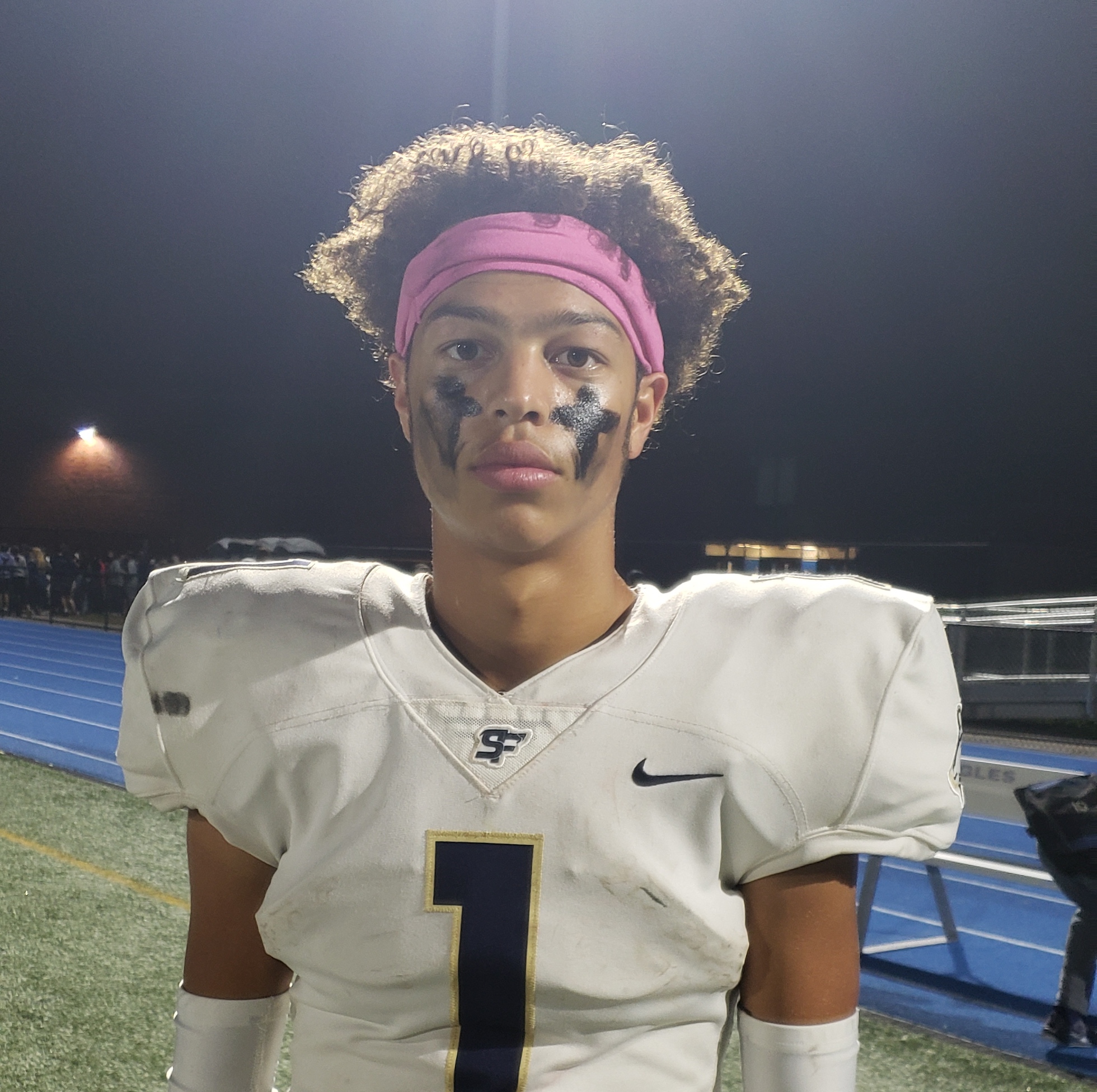 The senior doubled his interception total on Norristown’s first pass attempt of the game and tripled it the second time they threw the ball. Turner grabbed his third pick of the game early in the second quarter before snagging his fourth – and returning it 32 yards for a touchdown – two minutes before halftime.

“The defensive line got pressure, the linebackers dropped, corners did their job and I was just there to do my job, too,” Turner said. “I was happy to make it happen.”

Turner’s defensive score was his final play of the game. The Rams starters were given the rest of the night off after the 6-foot-2, 175-pounder gave them a 49-0 lead, which stood as the final score in the Pioneer Athletic Conference Liberty Division matchup at Norristown Area High School.

“Cole has been one of the best leaders that we’ve had here at Spring-Ford,” head coach Chad Brubaker said. “He’s really kept us together during that three-game losing streak. It was tough. That was something we’re not necessarily used to. Cole’s just been outstanding. As much as those interceptions – he’s played excellent on the field – but he’s also just a great leader for us. I think that would be universal, everybody on the team; if you asked them, that’s what they’d say.”

A lot of Turner’s hard work comes in the film room. Brubaker said they introduce the game plan and send it out on Sunday night or Monday morning. By the first practice of the week, Turner knows everything and is ready to go.

“I saw (Norristown likes) to throw to (wide receiver Julian Arthur) a lot,” Turner said of this week’s film study. “I just had my eyes on him and read the QB and the linemen and I just did my read from there and then flew to the ball.”

In those seven possession, the Rams allowed 45 yards and two first downs on 21 plays.

Spring-Ford flexed its defensive depth and held the Eagles (0-7, 0-3 PAC Liberty) scoreless for four possessions after the starters exited the game to finish the shutout.

“We tell all our guys no matter what the score is come into every quarter, every play it’s 0-0,” Turner said. “We have that 0-0 mindset, next-play mindset. Shutout the score and do your job. That’s how we get our ‘dubs.'”

The Rams offense thrived on third down while building its early lead. They converted on 3rd-and-10, 3rd-and-14 and 3rd-and-8 on three of their first four touchdown drives.

“That’s not necessarly a good sign,” Brubaker said of the third down conversions. “We’ll have to take a look at the film with some things.

“We threw the ball well and I guess the bright side is we converted third downs, but we don’t want to be in those situations, obviously.”

Quarterback Ryan Freed, who finished the game 6-for-6 for 179 yards and three touchdowns, connected with Kolten Kqira for a 65-yard gain on 3rd-and-10 on the third play of the game. On the ensuing play, he threw a jumpball into the end zone and Zach Zollers came down with it for an eight-yard touchdown.

After two Turner interceptions sandwiched around a Fish 10-yard touchdown run, Freed and Zollers were back at it again. On 3rd-and-14, Freed found his tight end for a first down and Zollers took it the rest of the way for a 47-yard score.

The teams traded punts and Turner grabbed another interception to set up Freed’s third touchdown of the game. On 3rd-and-8 he connected with Gage Swanger on a crossing route. Swanger was off to the races along the Norristown sideline and found paydirt from 64 yards away for a 28-0 lead.

Harry Adieyefeh Jr. scored a pair of touchdowns – from two yards and seven yards out – to make it 42-0 before Turner’s defensive score put an exclamation point on the Rams first half dominance.