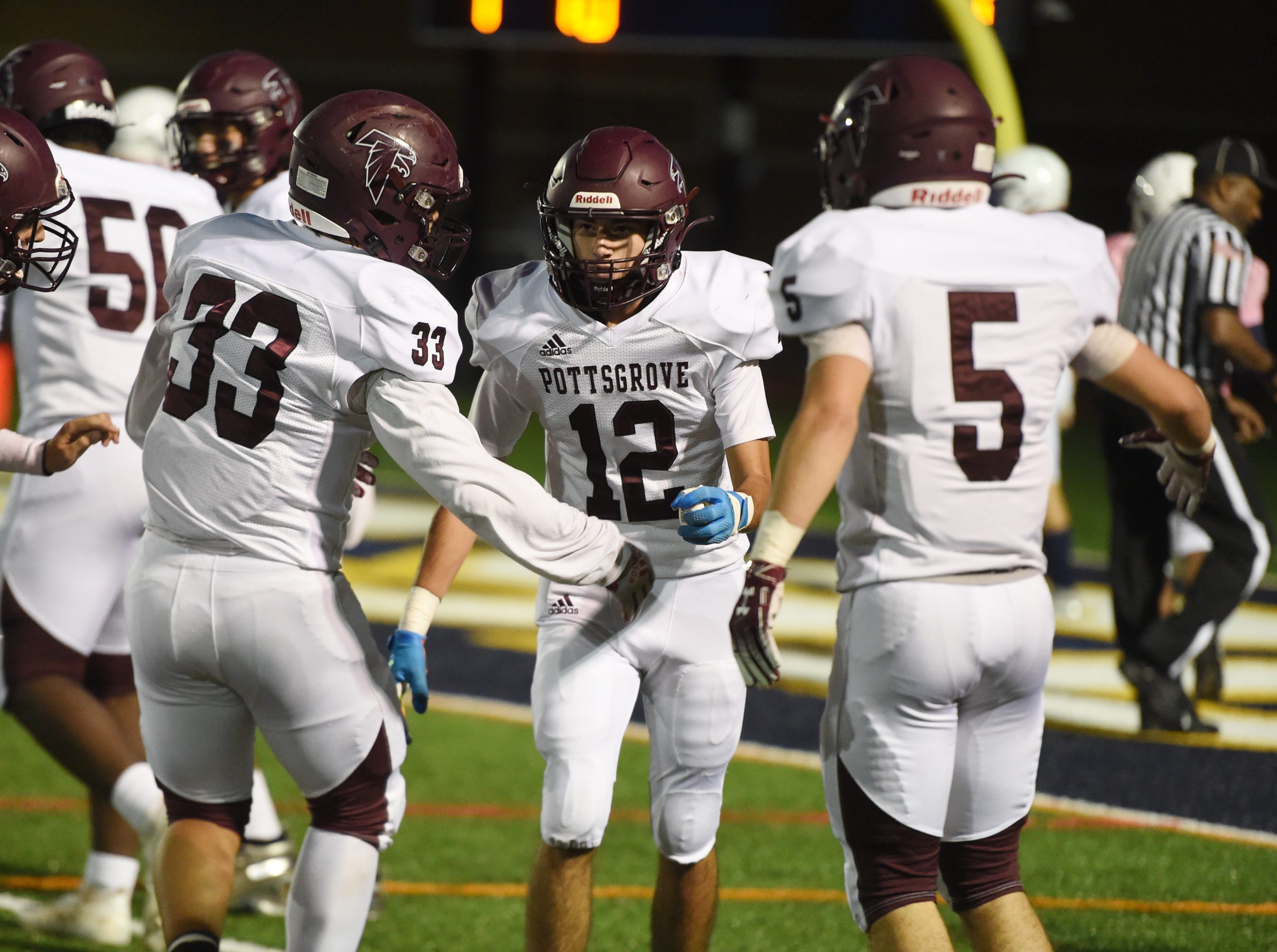 KING OF PRUSSIA >> With its two other phases putting together uneven performances Friday night, the Pottsgrove football team leaned on its special teams unit for the second week in a row.

Despite a significant disadvantage in offensive yards (398-226) and first downs (16-5), return touchdowns from Vinny Scarnato (punt) and Amir Brunson (kick) boosted the Falcons to a 36-20 Pioneer Athletic Conference Frontier win over Upper Merion.

“We just rep kickoff, kick return all the time,” said Brunson, who already has three kick return touchdowns this season. “Everyone does their job and it works out perfectly.”

Falcons’ (2-0 PAC Frontier, 4-1 overall) quarterback Ryan Sisko ran for two scores, including a 78-yarder, and tossed a 58-yard score to Brunson. Brunson added a pair of sacks and an interception to round out his big day.

Upper Merion (1-1, 3-2) quarterback Zayd Etheridge had a breakout game for the Vikings, completing 18-of-27 passes for 347 yards and touchdown passes to Nolan Clayton and Alzere Thomas.

“Special teams, we made more mistakes than they did,” Upper Merion coach Davis Chubb said of the difference in the game. “You look at the scoreboard and that’s what it shows right there. The punt return and the kick return. In a shootout like this with two good offenses and defenses, they put up more scores because we made more mistakes.” After falling behind 22-7 in the second quarter, Upper Merion cut the Pottsgrove lead down to 22-20 on its first offensive drive of the second half when Joey Kovacic punched in a one-yard touchdown run to cap an 80-yard drive.

Brunson made sure the tight score didn’t last long.

He returned the ensuing kickoff 83 yards to turn a two-point game into a two-possession game, giving the Falcons a 29-20 edge with 6:03 left in the third quarter.

“I just read the line, read the blocks and use my speed to get to the hole,” Brunson said.

Upper Merion’s offense drove down the field deep into Pottsgrove territory on the next drive, but Eli Zayas came up with a fourth-down stop and Sisko went 78 yards for a touchdown on the next play to extend the Falcons’ lead to 36-20 with 2:19 to go in the third.

“I think a big thing is coach (Bill) Hawthorne’s been my coach for four years so we know how to talk, we have good communication,” Sisko said. “Me just going out there and seeing stuff, coming back and telling him so that he knows some of the right plays to call, I think that’s something that really helps the offense when it’s stalling a little bit.”

Sisko’s big run was part of three big plays for the Falcons, which made up the majority of their offensive output. He also tossed a 58-yard touchdown pass to Brunson and completed a 70-yard pass to Tyler Kaufman.

Outside of those three plays, the Upper Merion defense held Pottsgrove’s offense to 26 total yards.

“That’s our defense, we’re a stout unit,” Chubb said. “We haven’t been susceptible to the big play, but it’s just missed assignments or blowing something. That’s all it is. That’s all it takes unfortunately.” Conversely, the Vikings moved the ball effectively through the air for much of the game against the Falcons. Etheridge tossed a 59-yard touchdown to Thomas to tie the game 7-7 at the end of the first quarter after Scarnato’s early punt return touchdown gave the Falcons the lead.

Etheridge also connected on long passes to Zielinski (42 yards) and Marcus Crittendon (33 yards). A touchdown pass to Nolan Clayton (four catches, 36 yards, TD) at the end of the second quarter made the score 22-14 heading to halftime.

“Our wideouts stepped up,” Etheridge said. “Brad Zielinski, Marcus (Crittendon), Alzere (Thomas). We all added new pass plays this year because we knew we were going to throw the rock a lot and they came out to play tonight and I’m so proud of them.”

Pottsgrove’s defense allowed the Vikings to march down the field on their first drive of the second half, but that was it as the Falcons made enough plays down the stretch to secure the win.

“We knew this was a big game coming into it, so we knew we had to step up, play hard, play our best game pretty much,” White said.