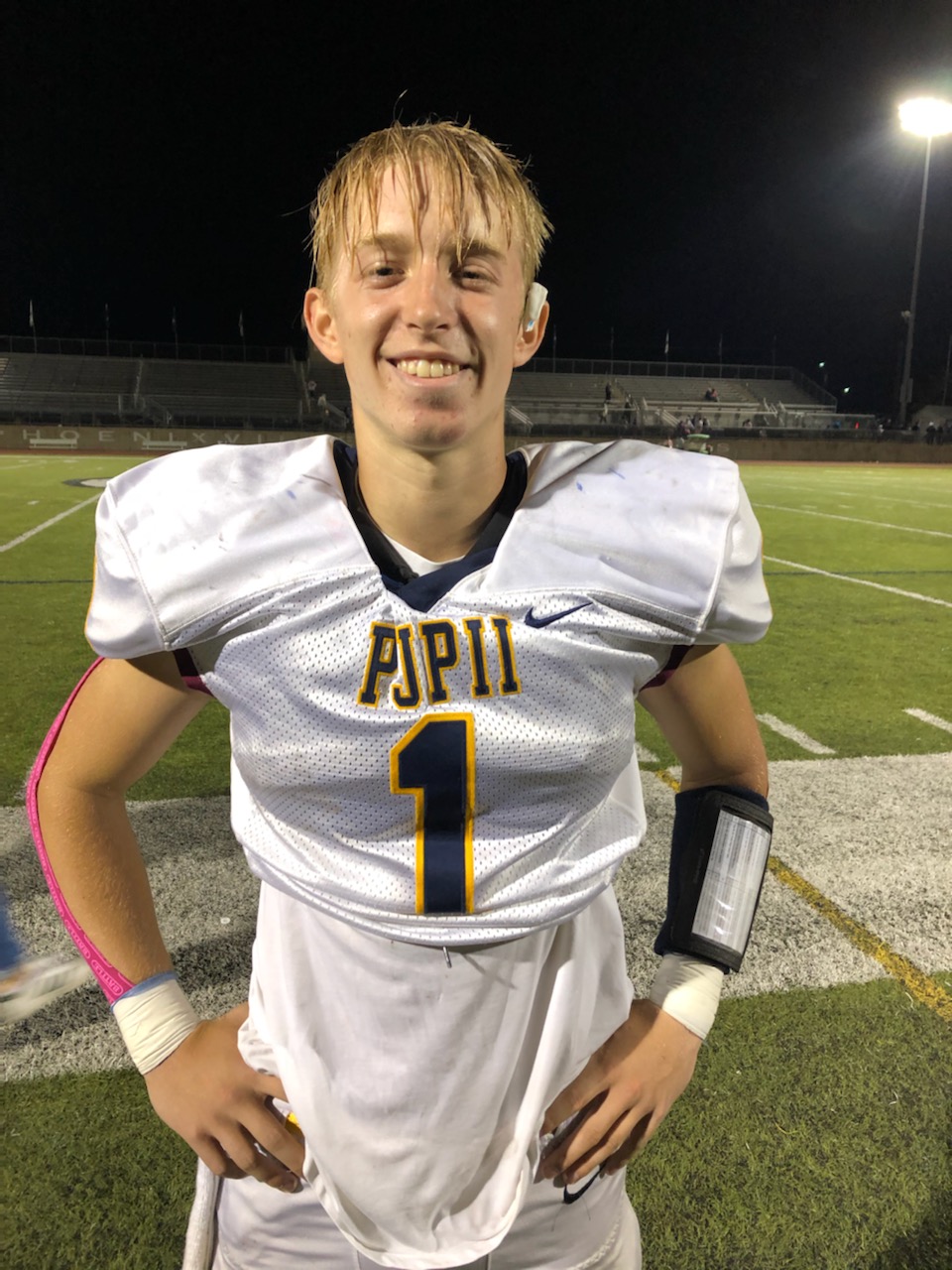 He felt his players could right their ship against Phoenixville without a motivating tongue-lashing. The Golden Panthers validated his trust by doing just that, rolling to a 28-10 victory in their Pioneer Athletic Conference Frontier Division matchup at Washington Field.

The uncharacteristic first half saw PJP (2-0 division, 4-2 overall) trail the Phantoms (0-2, 1-4) 3-0, stopped most notably on downs at the home team’s 24-yard line in the final minute before halfetime. Solid play from their defensive unit enabled the Panthers to stay close to Phoenixville, whose edge came from a 26-yard field goal by Mike Sposato at the start of the second quarter.

“I didn’t want us to panic,” Graver said. “I wanted us to be patient, to make adjustments.”

PJP did that in a big way when it came out for the second half. It scored four of the five times it had the ball — the lone exception a final possession that emphasized running the clock out over the final 3:49. It forced the Phantoms to fumble the ball away the second and third go-round, setting the stage for touchdowns both times. And the running game, particularly that of Josh Little and Steele Depetrillo, ramped it up to 230 total yards after mustering just 58 in the early going.

“I was rolling out when I shouldn’t have, making bad assignments,” quarterback D.J. Clarke said. “But we were motivated. It was kind of like our game with Berks Catholic, where we had a terrible (34-14) first half but came back in the second.”

While PJP was surging down the stretch, Phoenixville left Anthony Ciarlello in search of a complete game from his charges. The inspirational first half faded with 6:39 left in the third quarter, when Depetrillo (nine carries, 35 yards) went two yards up the middle to give the Panthers a 7-3 lead.

Fumbles on the Phantoms’ next two possessions were turned into touchdowns that staked PJP to a 21-3 lead that went to 28-3 in the first minute of the fourth.

“Tonight we had a third-quarter problem,” Ciarlello said. “We can’t not play four quarters.”

Phoenixville improved in point-scoring over the previous weekend’s game, where it was blanked by Pottsgrove 31-0. In addition to Sposato’s field goal, it closed out the night’s scoring with Sam Moore intercepting a Clarke pass at the visitors’ 28 and running it back for a “pick six” capped by Sposato’s conversion kick.

“We did a lot of great things,” Ciarlello added. “We were a lot better than last week. The team doing what it did in the first half was big.”

Little got all but 27 of his game-high 176 yards in the second half, His scoring plays covered 16 and 56 yards, and six of his 10 second-half runs went for double digit yardage.

Clarke added a solid passing game, completing 12 of 15 attempts for 89 yards. His 14-yard toss to Brendan Kenning, with 4:18 left in the third, complemented the running game.

On the defensive side, Depetrillo intercepted Phoenixville QB Ty Romance (6-for-15, 33 yards) late in the second quarter. Nyzir Lake was part of the two fumble recoveries — he had one solo and the other a recovery-by-committee that included Depetrillo and TJ Boccella — while Kenning had a sack and drop of Romance during a five-play span of the third and fourth quarters.

“The defense was phenomenal,” Graver said. “(Coach) Tony Yerger stresses getting turnovers, and that was huge. When we weren’t playing well, the defense kept us in the game.”

Owen Koch was the sparkplug of the Phantom offense, gaining 99 yards on 14 carries. The defense was aided by Myles Tenbroeck’s sack of Clarke and Lucas Beecher’s drop of the PJP signal-caller late in the first half.

NOTES >> Pink was the color in vogue at the game, in recognition of October as Breast Cancer Awareness Month. … Steve Rist added conversion kicks on each of the Panthers’ touchdowns.