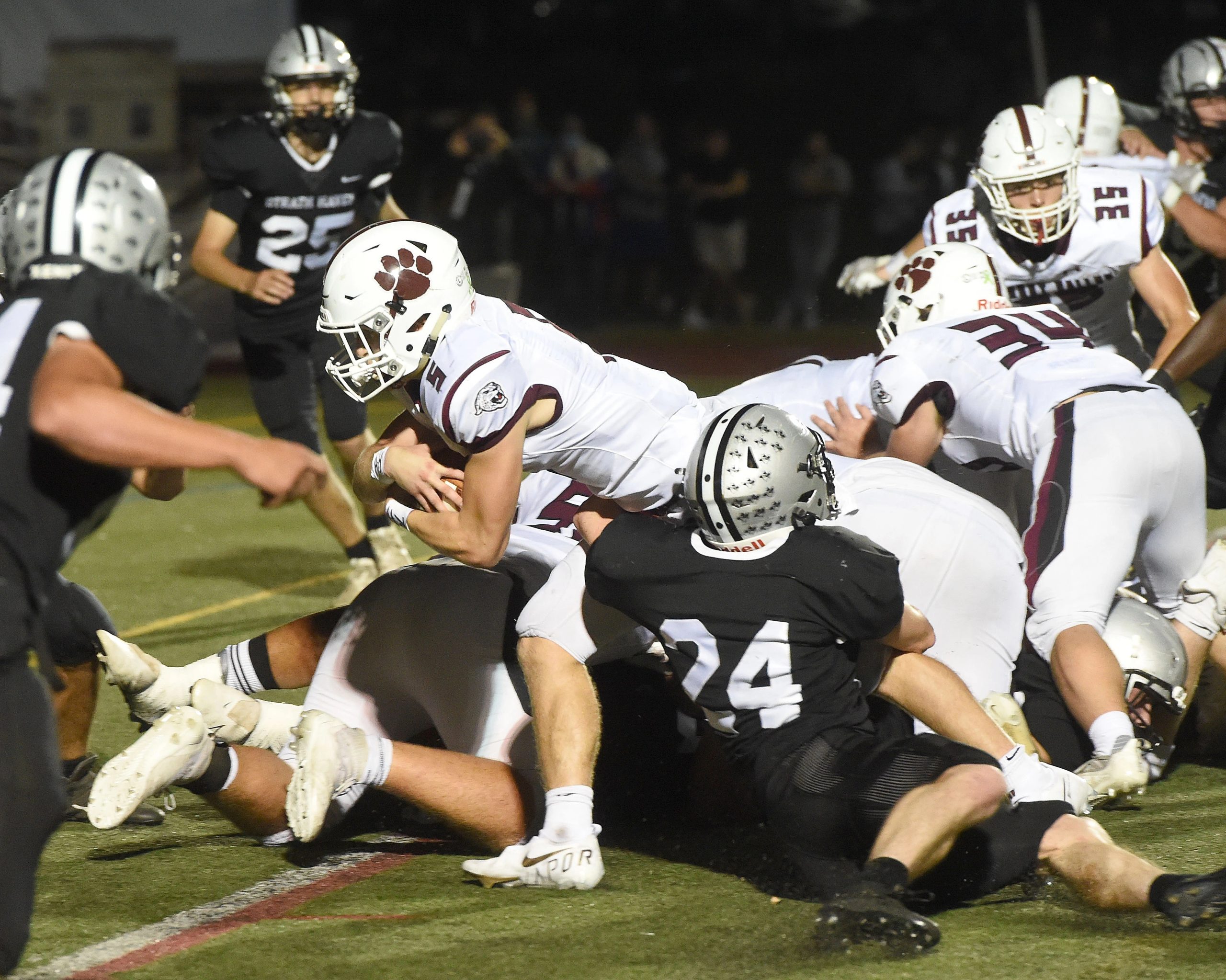 RIDLEY TWP. — Mike Ricci didn’t have to say much at halftime Friday night. His Garnet Valley football team was under no impression that it had played well enough in the first half. The defense, especially, knew it had gotten beaten up good by Ridley offense to the tune of 34 points, or 13 fewer than it had allowed in its previous five games combined.

So Ricci left his defense to it, to the task of discerning what needed to change.

“We went into the locker room, we knew we had stuff to work on,” junior linebacker Drew Van Horn said. “We talked about it, no one got mad with each other. We just figured out what we need to do and we came out on the field and executed. There’s nothing better we could’ve done.”

That vaunted Jaguars unit made sure that Ridley got nothing done after the break.

Garnet Valley held the Green Raiders’ offense to a solitary second-half field goal, rattling off 37 unanswered points for a 65-37 win in a clash of unbeaten, Class 6A Central League teams that more than lived up to the hype.

Ridley (5-1, 4-1) headed into halftime flying high with a 34-28 lead, the last installment delivered by Tahir Mills’ halfback pass to Nahaj Saleem with 11 seconds left. Having deferred the kickoff, they started the second half with a drive to the 3-yard line that stalled, leading to Nick Volpone’s 22-yard field goal for a 37-28 edge.

But Garnet Valley (6-0, 5-0) made sure that was the end of the scoring. It forced punts on the Green Raiders’ next two series, then recovered a fumble when CJ Wood popped Kimir Stephenson near the Ridley sideline and Van Horn hopped on the loose ball. Another turnover on downs followed, forced by Van Horn’s sack of Ridley quarterback John Heller, and the fight was ended when Jake McDowell scooped a fumble in the dying moments.

While the defense held, the Garnet offense revved up, even as injuries forced it to dig deeper into the running-back rotation. Ryan Saunders was the man to finish drives in the first half with rushing scores of 12, eight and five yards in the first half. He added a four-yard TD five minutes into the third quarter.

But Saunders would exit with an injury, for a team already missing Shane Reynolds, their anticipated top ball-carrier. No matter, since Jason Bernard was more than willing to step up.

Tahir Mills to Nahaj Saleem with 11 seconds left in the half! pic.twitter.com/dHjDA0FBPU

The junior rumbled for 184 yards on 23 carries, including a 30-yard score with 19 seconds left in the third quarter. He added a one-yard plunge in the fourth quarter and a pair of two-point conversions. The player nicknamed “Bus” for his willingness to deliver on contact and his youthful resemblance to the running style of former NFL bull back Jerome Bettis, was part of a running attack that accounted for 412 yards on 54 carries.

“That’s what we practice for,” Bernard said. “We practice for situations like these every day. We make sure that every person at that position can get in the game and do well.”

“Everyone on this team knows how hard he works,” Van Horn said of Bernard. “He’s definitely the hardest worker in the weight room. He comes out every day and works. And it just shows when his number was called. He makes an impact on this team.”

Garnet Valley had no answers for Ridley in the first half, thanks to Heller. The quarterback was 17-for-28 for 311 yards, a fair few of them on passes released with defenders hanging off of him.

He found Khameen Powell on a 30-yard score on fourth-and-14 in the second quarter to get Ridley to within 21-20.

Ridley went ahead when Heller, again on fourth down, connected on a jump pass to Saleem for 43 yards, the converted defensive end shedding a tackler and pulling away.

“We always feel like we’re the underdog,” Heller said. “We always have the chip on our shoulder. We came in knowing how good they were. We wanted to shock everyone. But we fought to the end, and that’s what I love. And we’re going to keep doing that.”

Garnet Valley answered with a Saunders touchdown with 1:34 left to half, but that was plenty of time for Heller, who hit Paul Jackson for 37 yards before Mills found Saleem from the 14 for a 34-28 lead at the break.

Garnet Valley cut the margin when Busenkell (7-for-10, 118 yards) hit Sean Gallagher on a 25-yard score, his fellow lacrosse teammate tiptoeing down the sidelines. Saunders’ final score, set up by a Gallagher 45-yard burst, put the Jags up for good at 43-37 with 4:05 left.

Mills rushed for 97 yards on 25 carries, including a 14-yard first-half score. Such a high-scoring game – the sixth-highest in Delco history, and the highest scoring game Ridley High has ever been a part of – left Heller and his team hungry for revenge should they see the Jaguars down the playoff road.

“It definitely lights a fire under us,” Heller said. “We don’t want to feel like this again. It’s a tough, hard-fought loss. We’re going to keep moving forward, take it as a lesson and just get better.”

For Garnet Valley, this game presented proof of concept that when the games get tough, it’s a team that can respond. The defense, in particular, left with its collective head held high at the virtual second-half shutout.