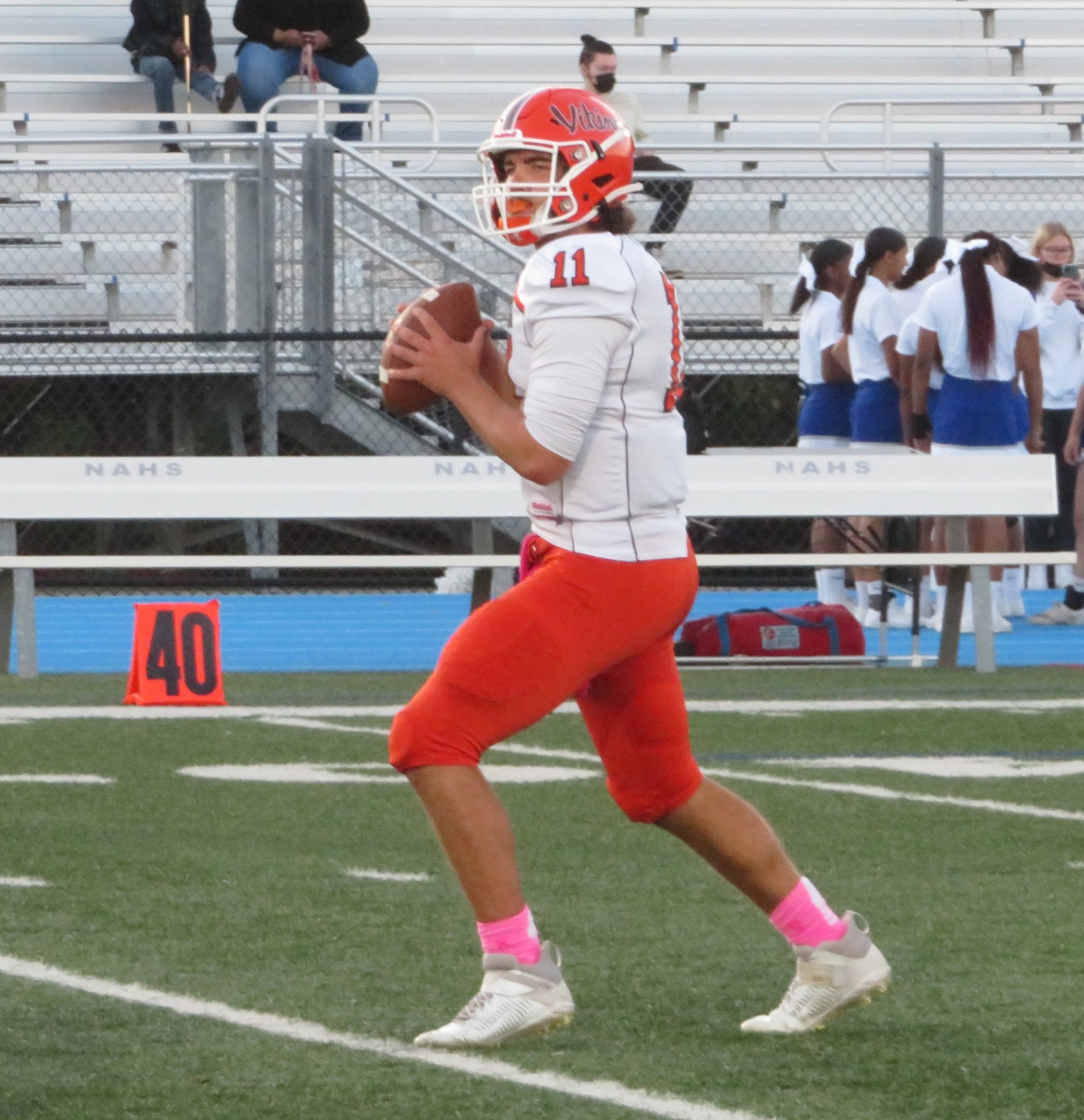 WEST NORRITON >> Perkiomen Valley didn’t have the start it expected against Norristown Friday night, but the Vikings quickly erased the early deficit and got the result they wanted – a 56-12 Pioneer Athletic Conference Liberty Division win at Norristown Area High School.

Perk Valley fell behind 6-0 on the second play from scrimmage and then turned the ball over on downs. From that point on, the Vikings only allowed six more points and scored touchdowns on all eight of their offensive possessions.

“On our first drive we just had a bad throw by myself,” PV QB Ethan Kohler said. “We were pretty calm and we knew that we could come in and do what we wanted. We stayed calm on the sideline and we were prepared.”

“That was less than ideal,” PV coach Rob Heist said. “You don’t want to give up a touchdown two plays into the game, but I was happy with the way our kids responded after that. Black eye right there on the first drive. I thought our kids responded well. I’m proud of the way we finished the game.”

The Vikings (4-2, 2-0 PAC Liberty) took the lead later in the first quarter when Kohler capped nine-play, 51-yard yard drive with a one-yard QB sneak for a touchdown. The extra point made it 7-6 and they led the rest of the way.

When PV got the ball back early in the second quarter it only took one play to reach the endzone. Kohler connected with Michael Poruban for a 47-yard score to extend the lead to eight, 14-6.

Kohler ran for a touchdown halfway through the second quarter from nine yards out to make it 21-6.

Norristown (0-6, 0-2 PAC Liberty) responded with an eight-play touchdown drive. The score came on a 4th-and-14 20-yard pass from quarterback Chris Carter to receiver Julian Arthur with 1:32 left until half.

Ninety-two seconds proved to be more than enough time for the Perk Valley offense. After a kickoff return to Norristown’s 46-yard line, it took just four plays and 59.1 seconds for the Vikings to get into the endzone. Kohler hit Owen Peterlin for a 16-yard touchdown to take a 28-12 advantage into halftime.

The third quarter was more of the same for the PV offense. Kohler went 4-for-4 in the quarter with two touchdown passes – an 18-yarder to Poruban and a 20-yarder to Rasheem Grayson.

Kohler finished the game 11-for-15 for 190 yards and four touchdowns through the air and 24 yards and two touchdowns on the ground.

“I had pieces around me that helped me get there,” Kohler said of what he believes to be a career-best six-touchdown performance.

“Our offensive line did a great job up front. On our run game we had great push moving forward, our running backs found the hole nice. Then on passes I had all day to sit back there and throw. When our receivers get open like that it just makes my job easy.”

“He’s our leader,” Heist said. “He’s earned the right to play this way at this point, being a starter for us for four years. I think the game has slowed down for him mentally. He sees things well and I think he’s taking advantage when opportunities present themselves and our kids are catching the ball for him. Our kids are running hard and our big boys are blocking well up front. Offensively I’m pretty pleased after tonight, but there’s always room to improve. District 1 is a tough place to play football.”

Daniel Koehler came on in relief and ran for a five-yard touchdown late in the third quarter to give the Vikings a 49-12 lead heading into the fourth.

Bradley Curci finished off the scoring for PV with a 13-yard touchdown run late in the final frame to make it 56-12.

Ryan Miceli led the PV rushing attack with 54 yards – all coming on one fourth-quarter carry. Andrew Beck added 53 yards and Ryan Klimek had 49.

Running back Meyon Ferrell was a bright spot for Norristown. He ran 15 times for 85 yards, including a 35-yard touchdown on the second play of the game to give the Eagles a 6-0 lead.

Arthur led the Norristown wide receivers with six receptions for 103 yards and a touchdown.