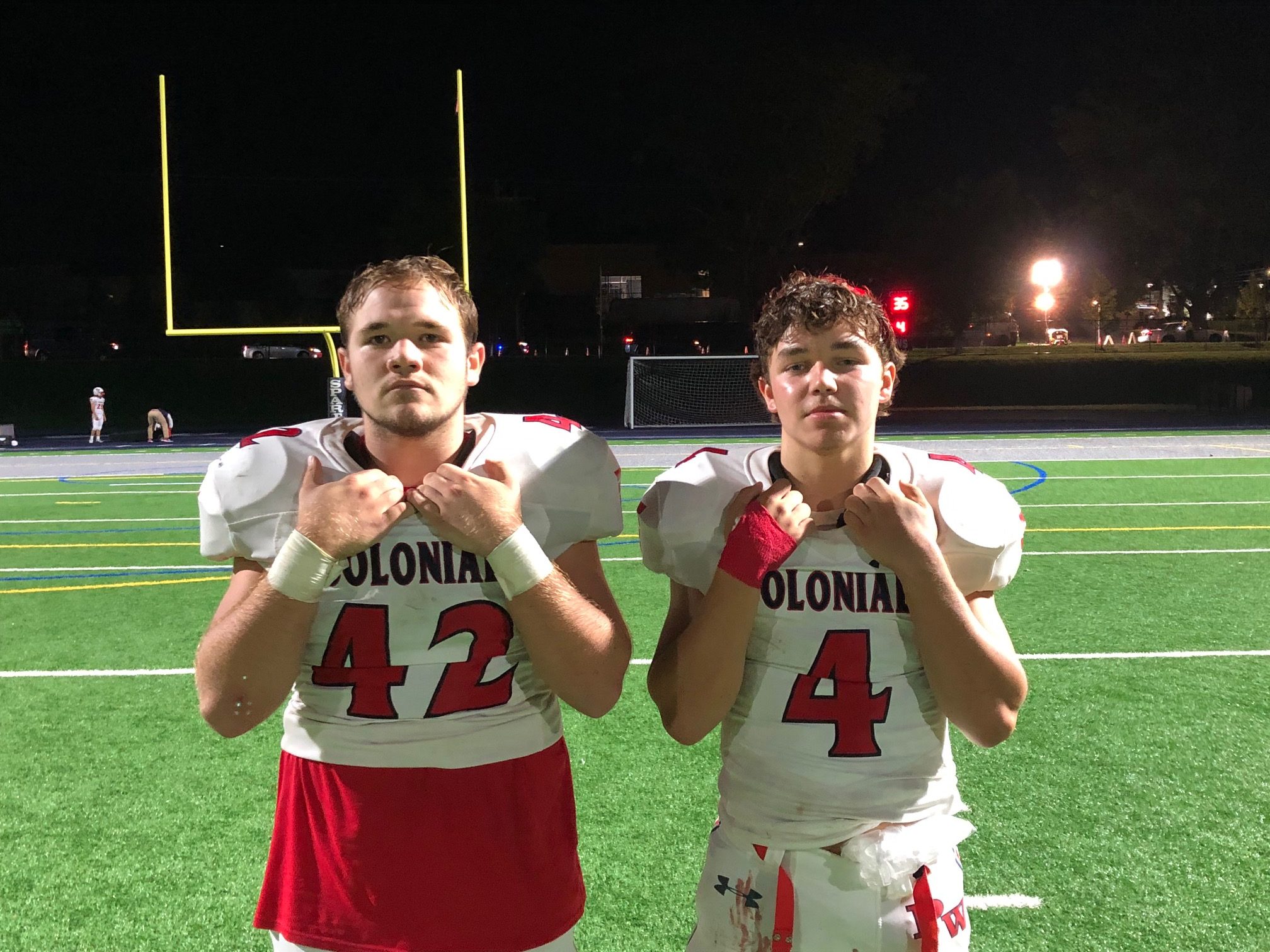 SPRINGFIELD >> If Plymouth Whitemarsh’s offense was a production, Aiden O’Brien would have a good argument for producer, director and top billing as participant.

In the Colonials’ veer scheme, O’Brien is the one calling the plays, making the reads and facilitating whether he keeps the ball, throws the ball, hands it off or makes a last-second toss to a teammate. It’s a role he’s only had for five games now, but he was masterful in each of his roles Friday night.

“I chalk it up to watching film and a great game plan from the coaches,” O’Brien, who threw two touchdowns and ran for another, said. “That’s really all it is, when you come in with good practice reps and prepared like this, that’s what happens on the scoreboard.”

The Spartans (3-1, 1-1 SOL American) had gotten off to a strong start this season, but coach Chris Shelly knew Friday was a step up for his team. He complimented the Colonials’ (4-1, 2-0 SOL American) systems and executions and noted every mistake gets magnified against an opponent like PW. There might not have been a better example than the Colonials’ second play of the game.

Using a lot of backfield motion before the snap, the Colonials suckered the Springfield Township defense in while tight end Jared Kulson broke down the seam and O’Brien hit him wide-open for a 59-yard touchdown.

“They’re a gold standard and we told our kids, in our eyes, they were playing for a championship,” Shelly said. “With how good they are, this was a test for us and things didn’t go our way. You can’t constantly be stuck behind the sticks and that play, we worked on it but we just didn’t cover it. You can’t be late and our kids knew it.”

Springfield has been very tough-minded however and the hosts showed that by going right down the field with some aggression. Ben Cooney hit John Adams on a gutsy 4th-and-2 call from their own 36, then Cooney capped the Spartans’ first drive with a 52-yard scoring run to tie the game.

Owen Hussie would strip the ball from O’Brien on the next PW drive, with Dylan McKenzie recovering. That led to another good Springfield Township drive capped by Cooney powering in from a yard out to go in front 14-7 late in the first quarter.

“We called it a heavyweight fight, but it got away from us late,” Shelly said. “Our run game, for whatever reason, we didn’t get too much out of it and maybe came out of it too early which is on me, but you have to find ways to keep the ball out of their hands.”

Big plays ruled the night for PW and the Colonials got one on special teams when Jimmy Foy returned the kickoff 55 yards to the Spartans’ 19. A play later, fullback Nate Kern powered right up the middle for a 19-yard touchdown to level the score just 16 seconds of game clock after the hosts had taken a lead.

Kern, who also plays linebacker with O’Brien on defense, felt the Colonials got stronger as the game went on and the defense was able to thrive once it took away Springfield Township’s running game. While the Spartans had 32 rushes, half of them came from Cooney who faced a lot of pressure as PW started to take control after halftime.

“We had a slow start in this game, we felt like we were ready but a couple mistakes set us back,” Kern said. “Our defensive line started to get a good push, the linebackers were flying around making plays, the DBs right behind them.

“We were able to call out their plays, you could see they were getting flustered. They couldn’t make plays, our guys were hyped, we came in here to eat.”

Joey Troilo, Lou Malfara, Kolton Gaile, Chris Kane and Zach Smith paved the way for PW, which ran 31 times for 210 yards paced by O’Brien’s 74 yards on 11 totes. The quarterback had two of the game’s biggest runs on the final drive of the first half, which only came after the defense made a point.

After stopping PW on a fake punt on fourth down, the Spartans marched down to the Colonials’ 22 only to face their own fourth-down choice. They went for it again, but this time failed to convert and gave PW a window to make moves with 2:56 left in the half.

On third down, O’Brien broke a 36-yard run that flipped the field and after a well-designed play led to a Chris McLaughlin 19-yard gain, O’Brien scored from 11 yards out a few snaps later with 31 seconds left in the half. The run was actually PW’s shortest scoring play of the night, with every other score coming from at least 19 yards out.

“That was a huge momentum-changer there for us,” PW coach Dan Chang said. “Knowing they were going to get the ball to start the second half, it really changed things. We rode the momentum there and built on it in the second half.”

O’Brien hit Phil Taormina on a 27-yard score and Zion East ran in from 23 out in the fourth quarter while the Colonials defense posted a second half shutout to keep Springfield Township at bay. While the final margin was three scores, it was a closer game than that and Shelly is eager to see how his team responds next week against Wissahickon.

“Our goal is to get healthy, we have Homecoming against Wissahickon, another well-coached team so it’s going to be a battle for us,” Shelly said. “Now you have to respond. We’re going to challenge them again and see how they respond after getting beat.”

PW will have a week off, then face a Cheltenham squad that’s rounding into form after handing Upper Moreland its first loss on Friday.

“It comes down to the little things, every blocking assignments, following the right paths, adding new plays and learning our main plays better,” Kern said. “Coach Chang puts in all this stuff in our scouting report to help us. When we know their plays, they can’t move the ball.”