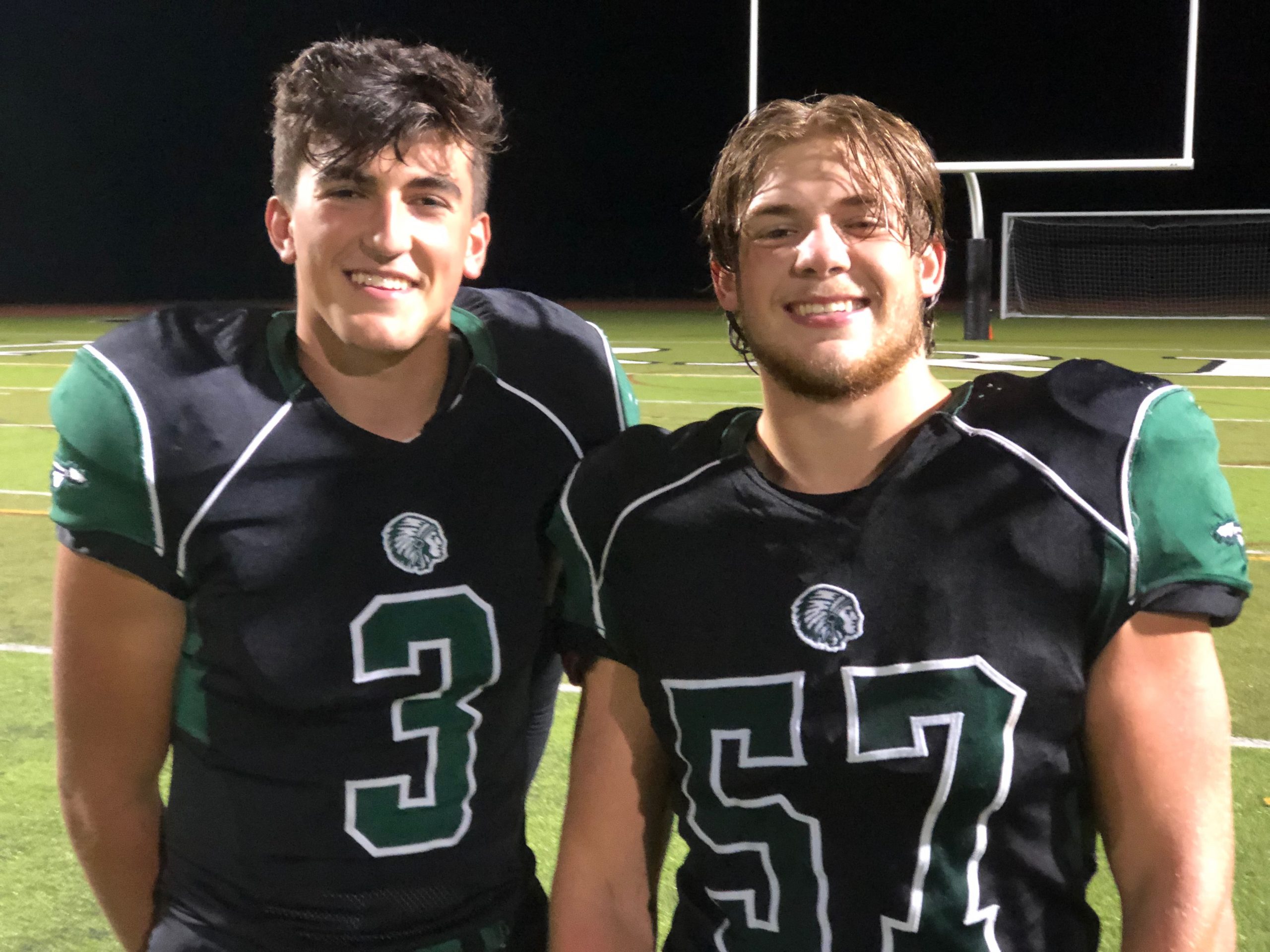 After a scoreless first three quarters for his team’s offense, Brandi— the team’s senior QB — scored three fourth-quarter touchdowns to help Methacton (4-1) to a 21-13 Pioneer Athletic Conference Liberty Division win over the Eagles (0-5).

The come-from-behind effort ensured the Warriors the program’s best five-game start in at least two decades.

“(We’re) ecstatic. We knew we could do this and we proved we could,” Brandi said. “Now we get to the serious games. Those first-half bad starts gotta end.”

.@MethactonFootb1 seniors Dan Brandi (3) and Connor Kazel (57) helped the Warriors to a 21-13 win over Norristown on Friday night. pic.twitter.com/VXCk6ctb3X

Brandi ran for two long rushing scores to put the Warriors up 14-13 with 8:29 to go after the Eagles took a 13-0 lead at the half. He then connected with Jake Chapman on a 30-yard touchdown pass to extend the lead to eight with 1:28 to play.

Norristown got the ball back, trailing 21-13, but the Eagles couldn’t advance past their own 35-yard line. Warriors’ senior defensive lineman Connor Kazel sealed off the win by wrapping up Eagles’ quarterback Chris Carter on fourth down to force a turnover on downs in the game’s final seconds.

“It’s a great feeling,” said Kazel, a constant presence in the Eagles’ backfield throughout the game. “We did start off slow, but we picked up. The scoreboard shows it and our team knows that the energy matched it. It was a great game and it felt good to finish it off.”

Brandi tossed for 83 yards and ran for 93 more. Norristown sophomore back Meyon Ferrell ran 20 times for 121 yards and a touchdown to lead the Eagles in a game that lacked offensive stars.

Methacton goes for the kill shot and gets it. Dan Brandi to Jake Chapman. 21-13 Methacton with 1:28 to play pic.twitter.com/rElUzD2NRr Ferrell ripped off a 44-yard TD run with 4:12 to go in the first quarter to put Norristown up 7-0. After a fourth-down completion from Robert Miller to Nate Robinson, Jamal Griffin’s short touchdown run extended the Eagles’ lead to 13-0 in the final minute of the first half.

That would be it as the Eagles’ offense went quiet in the final two quarters. They were stopped in the Methacton red zone on their first drive of the third after a failed onside kick attempt by the Warriors but never got the ball past midfield for the rest of the game

“We were proud. It was a good start,” Norristown coach Joe Milligan said. “We actually came out and played football. We executed and everything. That was a plus. We just gotta finish off the game. … We came out (in the second half) and sputtered on offense and didn’t score any points.”

Methacton held Norristown to four first downs and six total yards in the second half.

“Our D-Line picked it up,” Kazel said.. “Obviously it was a slow start, but our whole line played great. We started to jam up those gaps. They had no running lanes. We sealed the outside and just went from there.” Methacton had the struggling offense in the first half as the Warriors were held to just 65 total yards. Brandi’s tough running at the end of the third quarter and into the fourth finally broke the Methacton offense loose.

He scored a 45-yard touchdown run with 11:06 left, then broke multiple tackles on a 21-yard score, which was set up by a Dean Sapalidis fumble recovery. The two scoring drives were a combined four total plays — all Brandi runs.

“That quarterback blast, that’s our bread and butter,” Brandi said. “It’s there. We just got to it late. I wish we got to it earlier but we showed off that it works.”

The eight-point loss for Norristown was the Eagles’ closest contest since a 28-20 defeat to Bensalem in their opener.

With matchups against division powers Perkiomen Valley and Spring-Ford coming up, things won’t get easier, but Milligan hopes his inexperienced squad will continue to improve each week.

“We just gotta go back to the drawing board and keep practicing and coaching them up,” Milligan said.

The Warriors travel to Owen J. Roberts (4-1) next week were the two teams with the best record in the PAC face off.

NOTES >> Methacton sophomore Mia Pettine began the game as the team’s starting specialist, punting twice in the first half and beginning the second half with an onside kick attempt before junior Tyler Ready came in and booted three extra points in the fourth quarter. … Rashad Triplett had an interception to end the first half for Norristown. … Chapman (2 catches, 42 yards) and Brian Dickey (2 catches, 26 yards) were the leading receivers for Methacton. Robinson (2 catches, 33 yards) and Julian Arthur (6 catches, 27 yards) led the Eagles.