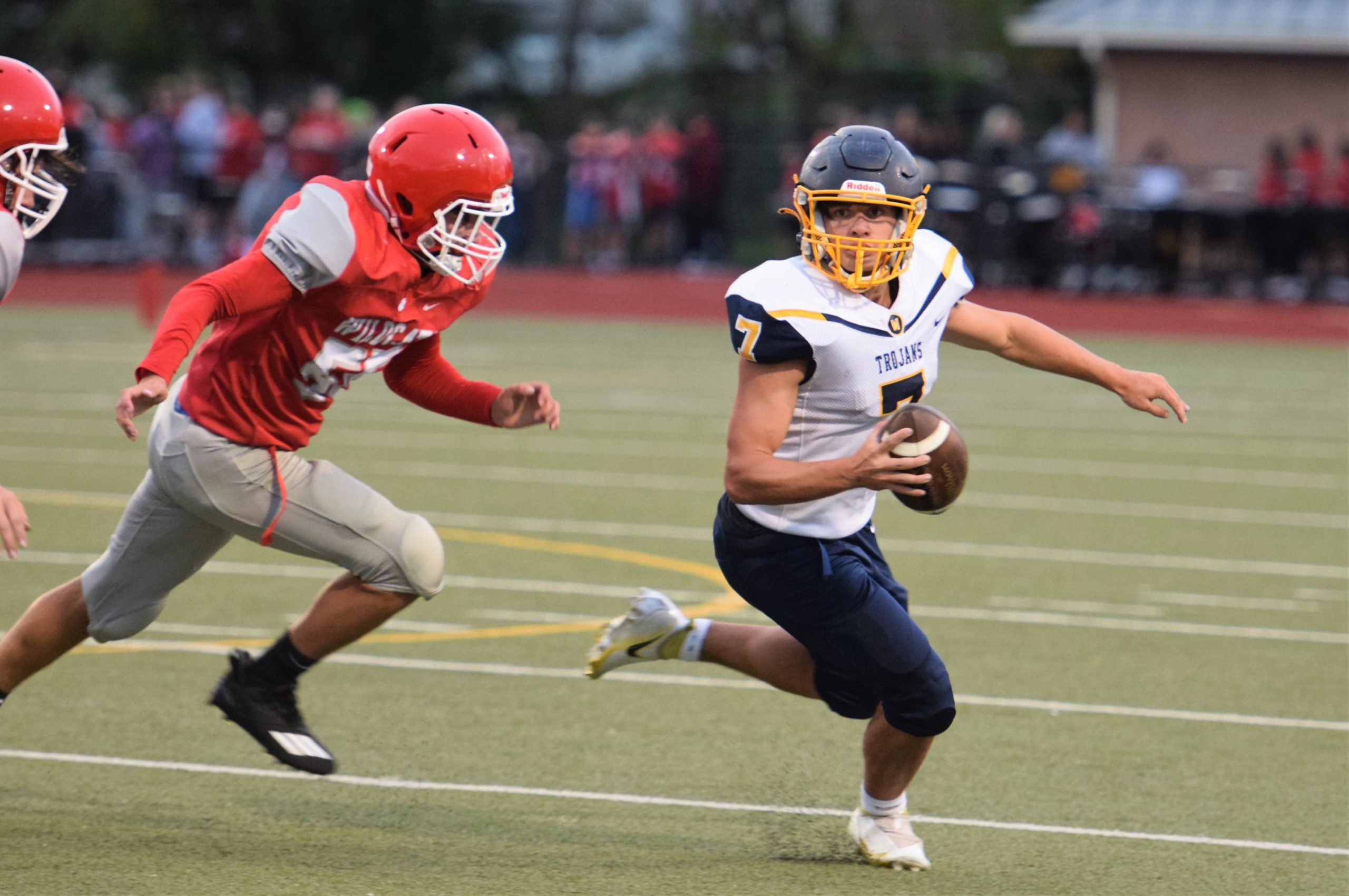 Wissahickon quarterback Aidan Defeo (7) scrambles to the outside as Owen J. Roberts' Jonathan Havrilak pursues in the first half. (Austin Hertzog - MNG File)

LOWER GWYNEDD >> It was a career night for Wissahickon quarterback Aidan Defeo.

The senior signal caller threw for five touchdowns and ran for another in Friday night’s 43-7 Suburban One League American Conference win over New-Hope Solebury at Wissahickon High School.

“When we came out with the passing game we had a plan to attack the one backside corner and it showed,” Defeo, who completed 11-of-21 passes for 236 yards, said. “He just wasn’t ready for us. We had a speedster (Jaylen Quick) out there who was trying to prove himself. He didn’t have a touchdown catch on the year, so they didn’t think much of him. I think we targeted him well and the line stepped it up again. We started slow on the line but they’ve really stepped it up and they’re playing great now. I got a lot of time and I can go through my progressions and really find who’s open.”

“It was a great game for him,” Wissahickon head coach Bruce Fleming said. “I put a lot of pressure on him this year being a senior quarterback who has been playing since he was a sophomore. I think now all of those years of experience are starting to come together for him. The game is really slowing down. He’s really starting to see a lot of different things out there. I’m proud of him and the way he played tonight. Now we need to keep going for next week.”

The 5-foot-10 quarterback threw two of his touchdowns in the first quarter. He connected with Jaylen Quick for 42 yards to get the scoring started and then found Braheem Thomas from 11 yards out to make it a 14-0 game.

Defeo hit Quick for another touchdown – this one from 31 yards away – in the final minute of the second quarter to send the Trojans (1-4, 1-1 SOL American) to the locker room with a 21-0 lead.

Wissahickon came out from halftime and dominated the third quarter. The offense had the ball three times and 11 plays turned into 22 points. Defeo threw a 44-yard touchdown to Thomas, ran for a two-yard score and hit Jaden McLean from 40 yards away. Defeo, who also serves as the holder, ran a bad snap into the endzone for a two-point conversion on the fifth touchdown of the game.

“Recently, we haven’t hit the long ball well,” Defeo, whose five touchdown passes were from an average distance of 33.6 yards out, said. “We have been hitting the short ball, but teams start to play us up now thinking we’re just going to go short. It was great to see that because now we have our matchup 1-on-1 and we can hit them deep. That worked out in our favor.”

“We want to push the ball,” Fleming said. “We want to put the ball into our playmakers’ hands. We have some pretty good receivers so we want to try to push the ball down the field as much as we can. We know if we can’t push the ball down the field, it’s always good to have No. 25 (running back Kyle Lehman) in the backfield to hand the ball off to. He’s just a dynamic guy. It’s a good 1-2 punch with Aidan and Kyle that we’re really starting to put together and we’re really starting to distribute the ball to our wide receivers as well.”

Defeo did more with his legs than just score the two-yard touchdown. He ran 10 times for 45 yards in the game, including a 4th-and-4 24-yard run in the first quarter to set up the Trojans second touchdown.

“All offseason I was working on running and stuff like that,” he said. “I knew we would need it in our offense this year and I wanted to bring more versatility.”

“During the offseason we told him that we want to use his legs a little bit more this year,” Fleming added. “We’re putting that ownership on him to know when to pull the ball and read and run. He’s really taking off and understanding what we’re looking for offensively. It gives another dimension for defenses to plan for – he’s not just going to stand back there and throw the ball, but now he’s going to run the ball as well.”

While the Trojans offense was moving up and down the field, the defense was getting the ball back. They forced seven punts in the first three quarters before taking a 36-0 lead and putting the running clock into effect.

“We’re slowly coming together,” Fleming said. “It’s a brand new defense this year that I put in based on the personnel that I knew coming back this year. I knew it was going to take us a little time to figure it all out. I think each week we kept getting better and better defensively. We’re getting some guys back from injury that we had out earlier in the season. Now the guys are starting to feel how to play with each other and now we’re getting things rolling.”

Wissahickon held the Lions (1-4, 0-2 SOL American) to negative-two yards on nine first-quarter plays. New Hope’s first first down came halfway through the second quarter and the visitors picked up just two first downs in the first half.

The Trojans forced three takeaways – interceptions from Thomas and Aaron Clark and a fumble recovery from Jaylen Foster. They also picked up a field position boost when Ronnie Weldon blocked a punt.

“It was mostly our D-line, I can say that for sure,” Thomas, a safety, said. “Our D-line was getting pressure, getting back there. Our linebackers scrape, help right. The interceptions, we were just where we had to be.”