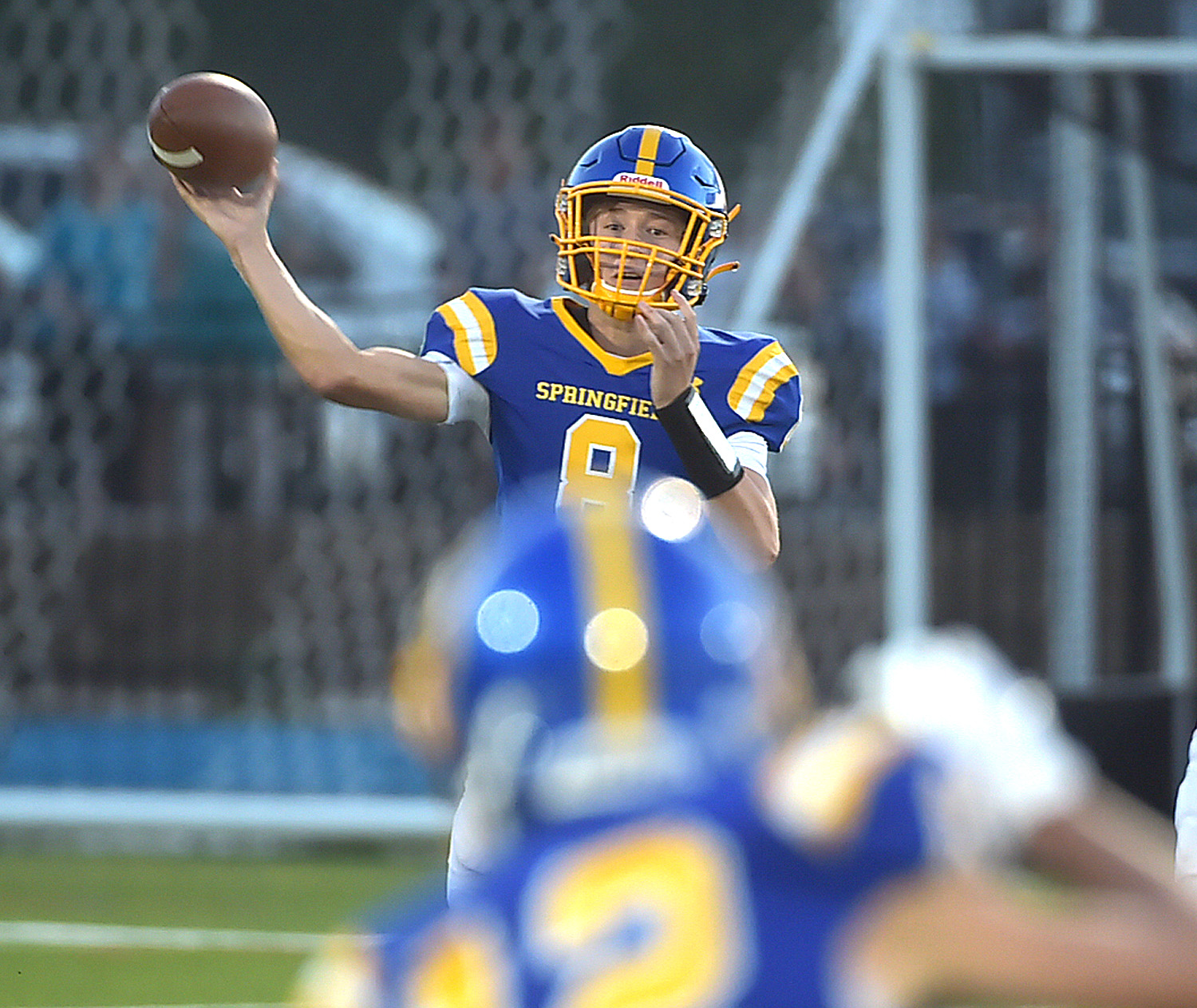 Springfield quarterback Jake Rama, seen in a game against Harriton, ran for a touchdown and threw for one in a 21-0 win over Upper Darby Fright night. (Pete Bannan/MediaNews Group)

Jake Rama ran for one score and threw for another, but it was the defense that stood tall as the Cougars blanked Upper Darby for the second year in a row, 21-0.

Springfield won last year’s meeting, 48-0, and has beaten the Royals three years in a row. The victory also was the second straight for the Cougars (3-2, 3-1 Central League).

The Cougars held the Royals to 19 yards rushing and 111 yards of total offense. Connor Roche led the defensive effort with seven tackles, including four for loss, and a fumble recovery. Makaih Crawford also had seven tackles, and Matt Dickinson picked off a pass.

The game was scoreless until Rama scored from one yard out on a quarterback sneak with 10:27 to play in the first half. It stayed that way until Roche bulled in from the one-yard line with 7:49 remaining in the third quarter. Rama hooked up with Aidan Kreydt with 56 seconds left in the game to close out the scoring.

Rama completed 16 of 23 passes for 208 yards. Robby Longo was on the receiving end five times for 67 yards, and Kreydt had four receptions for 48 yards.

Governor Mifflin 49, Episcopal Academy 26 >> It’s easy to see why Nicholas Singleton is ranked as the No. 1 running back recruit in the country and is headed to Penn State.

Singleton scored all six touchdowns as the Mustangs jumped out to a 42-6 halftime lead in a battle of unbeaten teams.

The 6-0, 210-pound senior set the tone early when he returned the opening kickoff 82 yards for a touchdown. That was just a warmup.

Quarterback Jake Fant got EA (3-1) on the board with a 10-yard TD pass to Jake Jaszcz with 2:52 left in the first half. Fant added a 36-yard scoring pass from Bryce Cooper in the third and scored on a one-yard run as time expired. T.J. Cadden took the second-half kickoff back 85 yards for a TD for the Churchmen.

In the Keystone State Football League:

Mercersburg Academy 36, Delco Christian 18 >> The Knights fell to 0-2 while the Blue Storm improved to 2-0. No other details were reported.