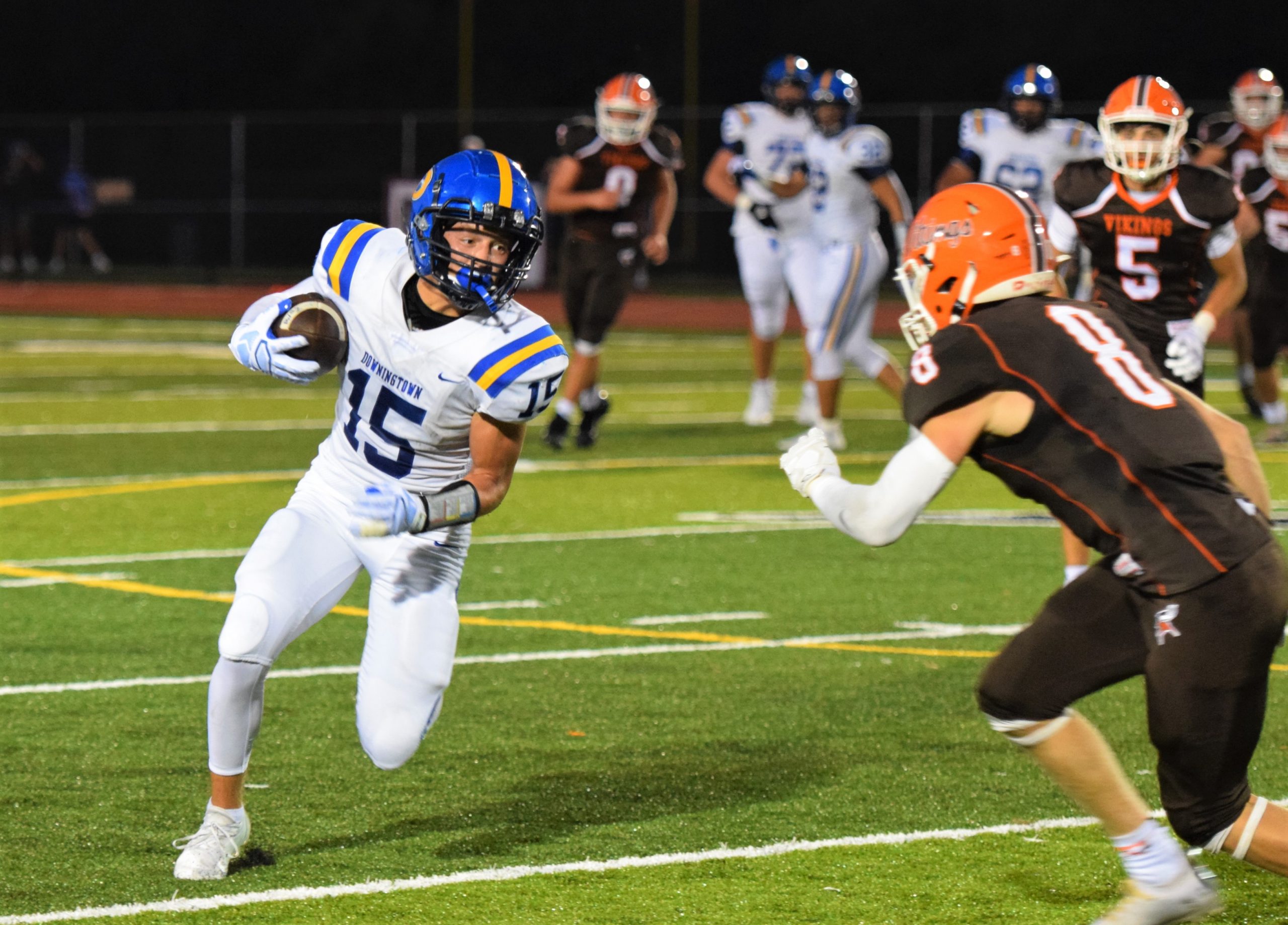 We are at Week Five of the scholastic football season and many important games are on tap this weekend. It is the halfway mark of the regular season and teams have to decide where their teams are going to end up in both league standings and the District 1 playoff points race. League games and non league clashes dot the schedule and here is a look at all the weekend action.
Tonight’s games
West Chester East at Downingtown West: Downingtown West got back on the winning track last week against Penn Wood, as the Whippets offense finally exploded for 55 points. West Chester East is winless and the Vikings dropped a 21-14 decision to Oxford last week. Downingtown West should be able to move the football on the ground against the Vikings. whippets quarterback Evan Wickersham had a big game against Penn Wood last week.
Downingtown West 41, West Chester East 14.
West Chester Henderson at Coatesville: Coatesville dropped Avon Grove 35-0 last week in a game the Red Raider defense allowed just 128 total yards of offense. Lebron Bessick had two punt returns for touchdowns. the Warriors are 2-2, and defeated Great Valley last week. Henderson will have to find some offense against a revived Red Raider defense that came alive and allowed Avon Grove just 129 yards of offense last week in a 35-0 win.
Coatesville 31, West Chester Henderson 14.
Unionville at Interboro: This is the second straight road game for the 5-0 longhorns. Senior quarterback Matt McCloskey rushed for two touchdowns in last week’s win over Sun Valley. Interboro blew a second half lead and fell to Chestier last week. Nate Holt will be a big player tonight for the Longhorns front line.
Unionville 31, Interboro 14.
Avon Grove at Great Valley: both these teams are on two game losing streaks. last week Great Valley fumbled four times and threw three interceptions against West Chester Henderson. The Red Devils could not muster much offense in a 35-0 loss to Coatesville.this should be a close game between two teams desperate for a win.
Avon Grove 21, Great Valley 14
Chichester at Kennett: Kennett seems to have a size and speed advantage here.Last week, the Blue Demons were shutout by West Chester Rustin 21-0. Kennett only amassed 152 yards of total offense last week but should be able to break out against he DelVal League foe.
Kennett 31, Chichester 13.
Malvern Prep at Berks Catholic: You really cannot look any better than the Malvern Prep defense than in last week’s 21-0 win over highly regarded Archbishop Wood.The Friars have now allowed just 10 points in three games. Berks Catholic is 3-1 and the Friars will have to throw the ball to win here as Berks catholic is very good up front. Friars quarterback Jack Capaldi threw for 189 yards in the win over the Vikings and has a good corps of receivers.
Malvern Prep 35, Berks Catholic 14.
Conestoga at Harriton: Conestoga is 3-1 for the first time since former head coach John vegan had the program at ahi level every season. Conestoga receiver Peter Detweiller had three catches for 130 yards and a touchdown in last week’s win over Lower Merion. Harriton is a bad team, suffering four blowout losses and the Pioneers should keep rolling.
Conestoga 42, Harriton 7.
Saturday’s games
Oxford at Chester: Oxford won a close game last week at West Chester East 21-14. the hornets are playing very good defense and so is Chester. This should be a low scoring affair. Last week the oxford offense totaled 373 total yards of offense and I think the Hornets can get it done over a very improved Clippers squad.
Oxford 21, Chester 17.
Bishop Shanahan at Penn Wood: Bishop Shanahan quarterback Cooper Jordan is an explosive, dual threat for the Eagles who played very well after a tough first period last week against Downingtown East. Look for the Eagles to get out early on the Patriots and get their fourth win of the season.
Bishop Shanahan 35, Penn Wood 14.
West Chester Rustin at Downingtown East: This is a revenge game for Downingtown East as the Golden Knights dominated the Cougars last year. It could be a battle of running backs between Rustin’s Dayshawn Jacobs and the area’s leading rusher in the Cougars Bo Horvath, who went for 224 yards last week on 36 carries against Bishop Shanahan. Both teams are very good up front but the Downingtown East offense may be more balanced than the Golden Knights.
Downingtown East 28, West Chester Rustin 24.
EOF-

Chichester backs out of football game with Academy Park
DiGiovanni: Malvern Prep is a treat to watch