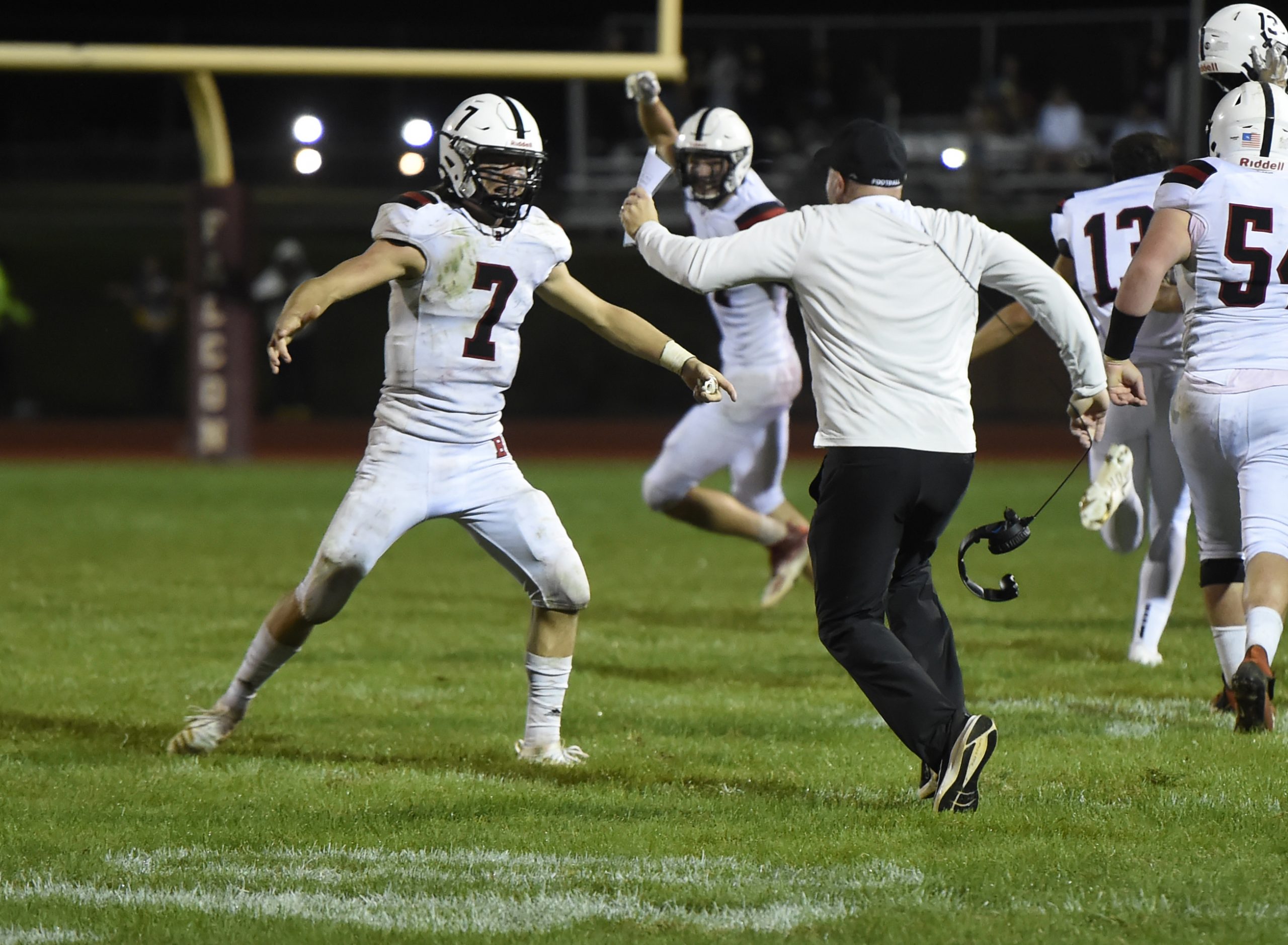 “It could be No. 1,” Ordway said. “I still gotta think. Everything is everywhere right now.”

After Leo Egbe ran in the go-ahead score to put the Bears ahead 42-35, a forced fumble by Anthony Famularo and subsequent recovery by Anthony Panarello in the fourth overtime gave Boyertown a non-league win over the Falcons.

The four-overtime thriller was the longest game in Boyertown history — and the longest contest almost all on the field and in the stadium could remember being part of.

“It was the craziest moment of my life just running around that field,” Bears senior Brandon Shane said of the celebration after the victory.

Entering overtime tied 14-14, Boyertown (2-2) sophomore quarterback Ryder Gehris tossed a touchdown pass to a leaping Ordway in the back left corner of the end zone on the first overtime possession before the teams answered each other with scores five more times.

Pottsgrove (2-1) senior quarterback Ryan Sisko followed with a touchdown pass to Tyler Kaufman to tie the score 21-21. Then came a Gehris sneak to start 2OT, followed by a touchdown run by Falcons’ junior Amir Brunson to force a third overtime, 28-28.

Gehris passed to Shane in traffic in the third overtime period and Sisko answered with a sneak to make it 35-35 and send the game to a fourth OT.

Egbe powered in what proved to be the game-winning score in the fourth overtime before Famularo’s punch and Panarello’s recovery finished off the all-time classic in the 40th meeting between the two teams.

“It was a great time for our first turnover of the season on defense,” Gehris said. “I think we played a complete game offensively and defensively and in the end we put it away at the right time, perfect moment.”

Sisko tossed for 95 yards and two TDs for the Falcons, also rushing one in. Tyler Kaufman (three catches, 81 yards) was on the receiving end of both passing TDs. Brunson ran 24 times for 113 yards and two touchdowns for Pottsgrove.

“Boyertown played a heckuva game,” Pottsgrove coach Bill Hawthorne said. “It was exactly what I thought it would be at the end of the day. It was a hard fought battle between two neighborhood rivals.

“I give Boyertown all the credit in the world. They fought until the very last second and did the things they needed to do to win. They’re a class program and tonight they were the better team and better coaching staff, too.”

The teams combined for three touchdowns on the first three drives of the game.

Gehris connected with fellow sophomore Jason Oakes for a 51-yard completion on Boyertown’s first possession Friday before running in a touchdown from 10 yards out. Brunson answered with a 19-yard run to tie the game 7-7 with 7:58 to play in the first quarter.

Marinello powered the Bears down the field on the next possession, scoring from 12 yards out to give Boyertown a 14-7 lead after a quarter of play. A 39-yard touchdown pass from Sisko to Kaufman late in the second quarter made it 14-14 at the half.

“We’ve got a very versatile team,” Marinello said. “There’s a lot of young talent, sophomores, freshmen. Everybody came out to play tonight.”

That was it for the game’s scoring until the fireworks of overtime as both defenses pitched shutouts in the second half. Boyertown coach T.J. Miller praised defensive coordinator Derek Bleiler for putting players in the right spot.

The Falcons had the ball late in regulation with a chance to win.

Pottsgrove senior linebacker Max Neeson, who was all over the field throughout Friday’s contest, intercepted a Gehris pass with 1:08 left to give the Falcons possession at their own 40.

They advanced the ball into Boyertown territory before Ordway came up with a clutch sack to end the threat. Panarello also had a sack for Boyertown, while Mark White had two and Brunson one for Pottsgrove.

“I think our defense played phenomenal,” Hawthorne said. “They did everything they could to keep us in the game. … Our offense has to do some things to get us out of holes sometimes and tonight it just didn’t happen.”

Following two lopsided losses at the hands of District 3 powers Exeter and Wyomissing heading into Friday night’s contest, the thrilling win over the Falcons provided the Bears with a rewarding moment to cap their non-league slate.