Pennridge powers to a win over Neshaminy 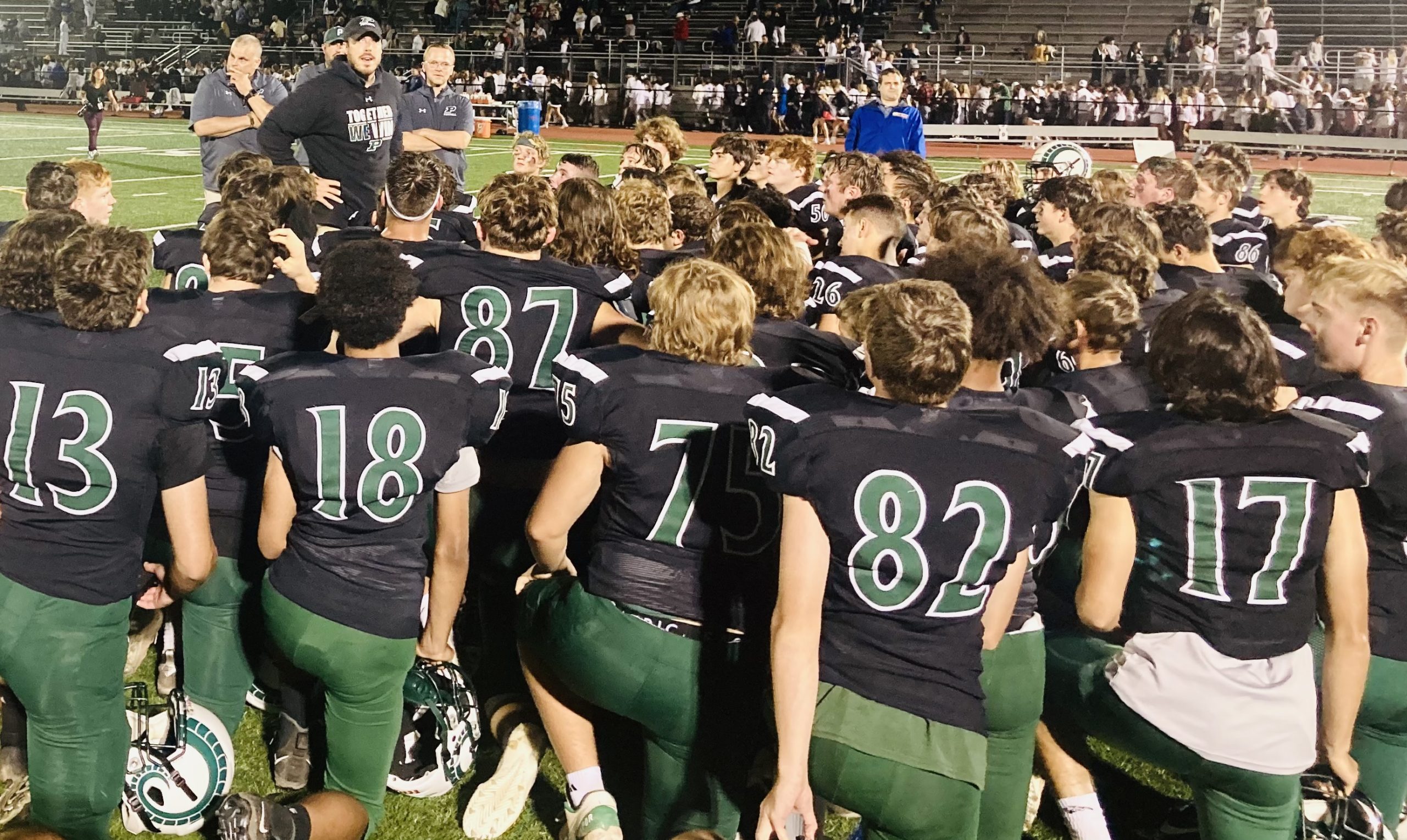 Pennridge huddles after its win over Neshaminy on Friday, Sept. 10, 2021. (Kev Hunter/MediaNews Group)

EAST ROCKHILL >> Pennridge began Friday night’s second half with a long, sustained drive that drained the clock as well as a little bit more energy out of a determined Neshaminy defense.

The 15-play march, which consumed more than half of the third quarter, brought victory within reach.

“That’s our offense. That’s what we try to do. We’re a run-oriented offense,” said Rams coach Cody Muller. “We can chew up the clock and kind of grind it down. That’s what we’re hoping for every time. Our guys did a great job finding holes. Wetzel, Picciotti, Mossbrook, Fisher, Landherr — they were all finding these big holes that were being created by the guys up front.”

The Rams piled up 261 rushing yards on the turf at Helman, powering their way to a 28-14 victory over the Skins in a Suburban One League National Conference matchup.

“We kept grinding in practice every day and stayed locked in throughout the week,” said Phil Picciotti, who starred at linebacker and contributed to the robust rushing attack with a one-yard blast that opened the scoring.

With its second straight win, Pennridge raised its record to 2-1 and is 2-0 in the conference. The Skins fell to 0-3 overall and 0-2 in the National.

Neshaminy huddles after its loss to Pennridge on Friday, Sept. 10 2021. (Kev Hunter/MediaNews Group)

“We talked about how when you face adversity, it comes down to ‘what’s your attitude?’ If you keep a positive attitude, you’re gonna get better. I think the kids kept a good attitude and we were in the game until the end,” said Skins coach Steve Wilmot.

The two teams went to the halftime break deadlocked at seven apiece, thanks to Picciotti’s one-yard score and a one-yard sneak by Neshaminy’s Nunzio Zydzik (77 yards rushing/32 passing).

Pennridge received the second-half kickoff and mixed runs by Tyler Wetzel (131 yards), Picciotti (27 yards), quarterback Xavier Dantzler (24 yds rushing/47 passing), Nate Mossbrook (51 yards) and Brennan Fisher (23 yards) to move the ball to the end zone’s doorstep, and then Brayden Landherr burst in from three yards out to give Pennridge a 14-7 advantage.

“I have so much respect for Coach Wilmot and that program,” Muller said. “I know that they’re gonna fight no matter what the record is or no matter who they have.”

Sure enough, Neshaminy answered, tying the game in the final minute of the third quarter on a two-yard rush by Zydzik.

The two teams battled into the fourth.

Fisher’s churning legs provided a 20-yard gain that set up a 16-yard score by Mossbrook, and the Rams were ahead again, 21-14.

This time, they were ahead to stay.

“That’s something that we can rely on a lot with our defense,” said Muller. “We have a lot of talented players on that side of the ball, some guys that played a lot of snaps. You know they’re always gonna rise to the occasion, so I’m really proud of those guys stepping up when we needed them the most.”

In a decisive fourth quarter, Pennridge’s defense forced a punt, a turnover on downs, and pried the ball away from Zydzik on a crucial turnover to wrap things up.

Phil Picciotti was a key contributor for Pennridge at linebacker and running back in the win over Neshaminy on Friday, Sept. 10, 2021. (Kev Hunter/MediaNews Group)

“We tried to keep the quarterback contained,” said Picciotti, a junior who is looking at Northwestern, Penn State and Virginia as possible landing spots. “He got around the corner a couple times but (we contained him for the most part). They ran a lot of power and we locked that up.”

A 24-yard touchdown run by Mossbrook made it 28-14 with 1 minute, 22 seconds to play and wrapped things up for the Rams.

“I thought our kids played hard. We have to block well. We’re just not consistent enough offensively,” Wilmot said. “Our special teams played better today than we did last week against CB East.

“You have to give Pennridge a whole lot of credit. They pretty much played mistake-free football and they have a nice team.”

Jenkins breaks through as QB threat, moving Dtown East to 3-0
Sun Valley’s grounds and pounds its way to a win at Great Valley