Seeking a payback, Strath Haven rolls one over Marple Newtown 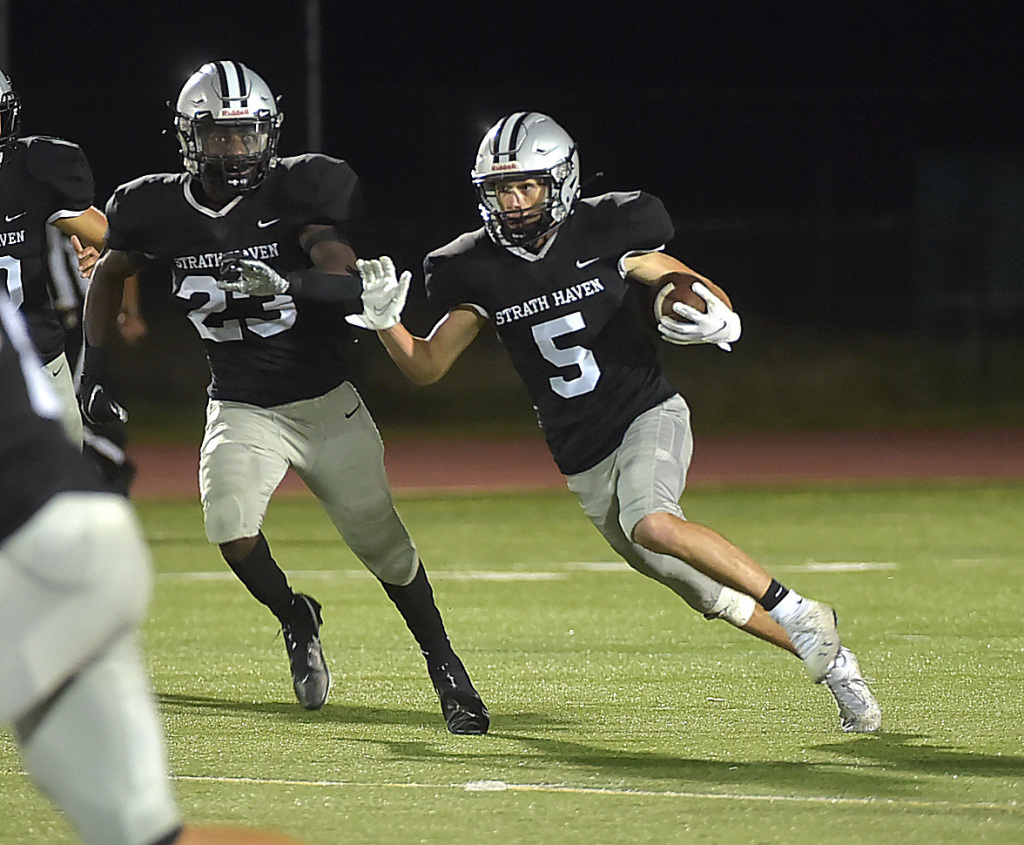 Strath Haven’s Chase Nangle returns an interception in the second half against Marple Newtown at George King Field Friday night. The Panthers rolled to a 41-13 win. (Pete Bannan/MediaNews Group)

NETHER PROVIDENCE — Friday night was all about revenge for Nate Perlman and the Strath Haven football team.

“They beat us last year and we were down after our loss to them,” said Perlman, the Panthers’ outstanding defensive end/linebacker. “We wanted to prevent that this year.”

Perlman was referring to Strath Haven’s defeat at Marple Newtown last October. It was the second game of a six-week season, but the setback proved costly in the long run for the Panthers, who coughed up a 10-point third-quarter lead en route to a three-point loss.

It was a spot the Panthers thought should have belonged to them.

“They ruined our chance at Garnet Valley,” Perlman said.

This year’s game was never in doubt. The Panthers dominated from the get-go, steamrolling Marple Newtown, 41-13. Strath Haven scored on the second play from scrimmage — a Chase Barlow 54-yard run — and found the end zone on all five of its first-half possessions.

“We were thinking about it the whole entire offseason,” said Perlman, who was a beast on defense, racking up several tackles. “All of the sprints, all of the running, all of the lifting in the offseason was for this game. They stood in our way.” Strath Haven (2-0) put on a clinic. An old-fashioned offensive performance by coach Kevin Clancy’s team. The Panthers averaged a ridiculous 20 yards per play in the first half. The combination of running backs Barlow (118 yards), Anthony Crawford (73 yards) and Matt Shuler (64 yards) overwhelmed the Tigers.

“They outplayed us a year ago,” Clancy said. “We felt like we needed to come back and have a good game, not only for the guys last year but obviously for ourselves this year. We’re liable to play them again (in the district playoffs) the way this thing is going. I have an awful lot of respect for their coaching staff and their team and they are tough to stop. But I’m proud of our kids tonight. It was a tough test; we play kids both ways, and they bore down and did a great job. They played their assignments on defense and did a really outstanding job. Offensively, I thought we executed really well.”

One player, Shuler, had no trouble executing the rare pass play called by Clancy. Quarterback Sam Milligan was a perfect 5-for-5 for 131 yards and three scores when the Panthers did decide to air the ball out. On two occasions Milligan connected with Shuler, who had touchdown catches of 38 and 59 yards in the first half. Nobody in MN’s defense could track him down.

“It’s beautiful when it happens,” Shuler said. “They just crowd all 11 in the box because we’re a team that’s known for running. So, when we do pass, it’s just wide open. No one’s expecting it. Like I said, it’s beautiful.” Barlow accounted for the first two touchdowns in the first quarter. The Tigers answered when All-Delco running back Charlie Box sprinted seven yards to the end zone, slicing the Haven lead to 14-6. Of course, the Panthers responded to that.

Shuler and Milligan connected on a 38-yard scoring strike to push the Panthers’ lead to 21-6. In the second quarter, Crawford rumbled three yards to paydirt to make it 28-6. Haven’s final touchdown of the first half was the 59-yard pass-and-catch from Milligan.

Box (96 yards on 12 carries) got his second touchdown in the third quarter. Haven cracked the 40-point mark when Milligan rolled out and found tight end Mason Green in the corner of the end zone in the fourth quarter. Green also had a sack on defense for the Panthers.

After putting up 49 points last week against Interboro, the Panthers scored 41 in their Central League opener. Haven’s just getting started.

“We’ve got to stay humble and take it week by week,” Shuler said. “We’ll see how it goes.”